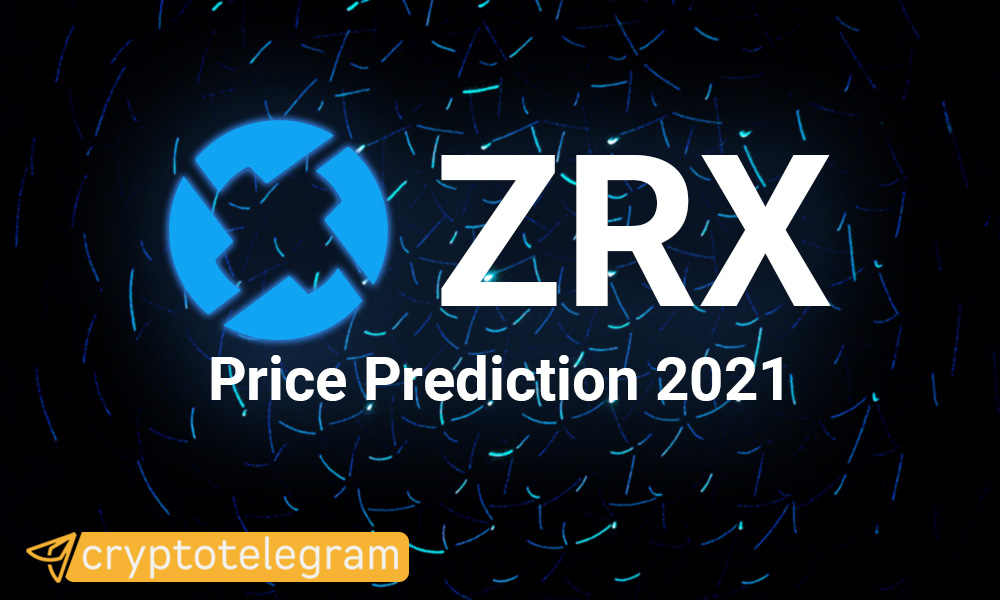 There’s no end in sight for the massive crypto bull run which started at the end of 2020. Bitcoin leads the way as alternative cryptocurrencies are also making incredible gains. A large number of investors looking for undervalued crypto projects consider 0x (ZRX) to be one of the altcoins with the largest potential for growth in the current year. Let’s analyze some of the most important ZRX price predictions for 2021.

ZRX is a unique Ethereum-based token powering the 0x infrastructure protocol. The main advantage of ZRX over other DeFi protocols utilizing the Ethereum network is the fact that 0x can be used to buy, sell and swap both standard ERC20 tokens and NFTs (Non-Fungible Tokens).

Since ZRX provides support for many different kinds of digital assets, the protocol is highly functional and can be applied to a large number of use cases. Platforms that can benefit from applying the 0x protocol include virtual trading desks, DeFi networks, digital marketplaces, and DEXs (decentralized exchanges).

The success and popularity of ZRX are largely caused by the fact that the 0x protocol can be very easily integrated into third-party platforms. Developers who want to apply the benefits of 0x into their projects can do it seamlessly and effortlessly, making ZRX one of the most widely used DeFi assets, integrated into dozens of decentralized applications (dApps).

The 0x protocol was created in 2016 by Amir Bandeali and Will Warren, who previously worked on other popular cryptocurrency projects such as Basic Attention Token (BAT). Bandeali and Warren still lead the 0x project as the CTO and CEO.

In 2017, a successful initial coin offering of the ZRX tokens was conducted. The company raised $24 million which helped to advance the development of 0x protocol.

The token originally traded for just $0.10, but within a few months, the ZRX price appreciated rapidly by over 2500%. During the memorable crypto bull run from January 2018, ZRX reached its all-time high of $2.53.

Like all other crypto assets, ZRX also depreciated after the end of the early 2018 bull run. The 0x developers however were putting a lot of work into improving and expanding the ZRX protocol technology. In 2019, a massive overhaul to the ZRX token was announced, which included a lot of new DeFi functionalities such as staking. Currently, 0x is one of the top 100 cryptocurrencies by market capitalization, and ZRX price predictions for 2021 are looking very bullish.

The 2020-2021 crypto bull run has taken not only Bitcoin but also a large number of alternative cryptocurrencies to historically unprecedented heights. The giant eruption in the popularity of digital currencies makes many experts believe that ZRX can surpass its previous all-time high in the near future.

Analysts of the cryptocurrency news platform Cryptogeek believe that the general situation on the digital assets market may cause the ZRX price to surpass the important $2 psychological level before Q2 of 2021, and continue growing to reach a new all-time high later this year. The portal has stated that: “The tendency to invest in crypto that was started in the spring of 2020, will eventually lead some people to buy ZRX tokens as the functionality of the 0x platform will get more useful. By Q2 of 2021, the price of ZRX might reach around $2.”

Another expert who believes that the ZRX price is likely to surpass its previous all-time high this year is the popular crypto trader Andy Dufresne. Dufresne believes that the 0x price may even reach $4 by the end of the year.

The popular Youtube technical analyst going by the name moon333 believes that the data points out the fact that ZRX price may grow even higher than $4 this year. According to him, technical analysis suggests that ZRX is “going to start the craziest move ever”, and that the token’s price may even reach $5 in 2021.

Another technical analyst who shares the $5 ZRX price prediction is the YouTuber Currency Nomad. He believes that 0x has successfully tested its support levels, and now the price can only go up. If ZRX reaches a new all-time high soon, $5 will start to look at a realistic level to expect at the end of the year.

The analyst Anisa Batabyal writing for the crypto portal Coinswitch doesn’t agree with the ultra-bullish predictions seeing the ZRX price reach $4 or even $5 by the end of the year. According to Batabyal $2.7 is the most realistic ZRX price prediction for 2021: “ZRX is expected to reach $2.732, which could be a more than decent ZRX price target.”

The ZRX price has been rising at an impressive rate over the past few months, but it will take a massive eruption in value for the ZRX price to reach $100. While it’s possible that it will eventually happen, it’s unlikely that ZRX will reach $100 in the near future.

What’s the Most Realistic ZRX Price Prediction for 2021?

One thing that all experts seem to agree on is the fact that 0x is currently massively undervalued. The token is already listed in the top 100 of the most valuable cryptocurrencies by market capitalization, but with space, it has for growth it can soon enter the top 50.

The most bullish factor working in favor of the ZRX price going up is the strong technical foundation of the 0x protocol. Unlike many DeFi tokens which are now mainly used for short-term speculation, ZRX is powering an advanced blockchain infrastructure that has found widespread use in the crypto ecosystem. ZRX is being integrated into a large number of projects and is used on a variety of decentralized exchanges and other DeFi platforms.

Another thing that everyone agrees on is that the current ZRX all-time high of $2.53 is a very important point of reference. When that level is reached, 0x will likely gain a huge boost that could possibly make the $4 or even $5 ZRX price predictions come true.

The solid fundamentals behind the 0x protocol were the reason for the coin’s steady, organic growth over the past couple of years. Now that the entire crypto ecosystem is overflown with the extremely bullish sentiment, ZRX seems almost destined to surpass its previous all-time high. If it manages to do so quickly, the ZRX price may skyrocket by the end of 2021.