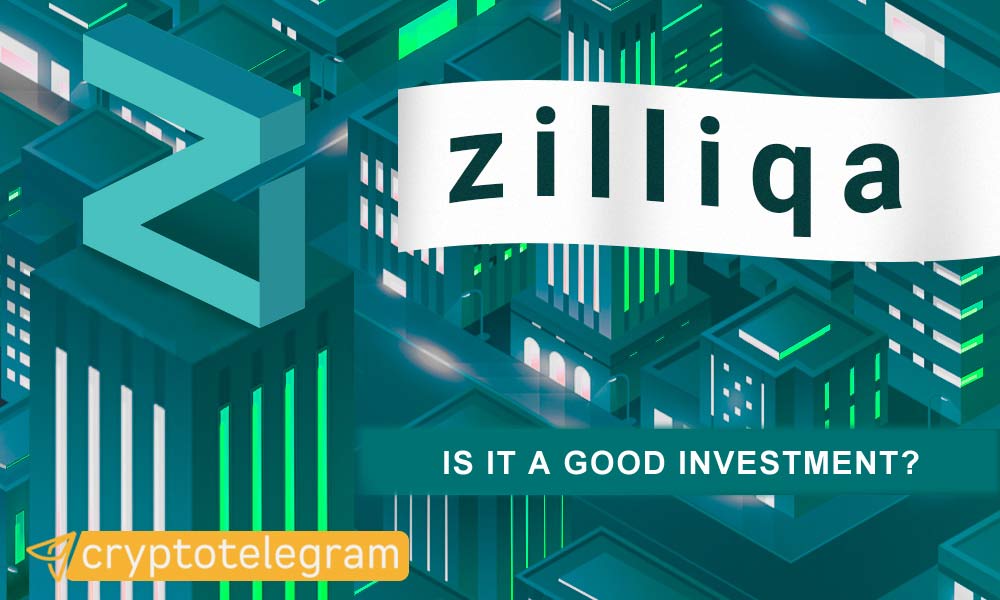 We have many crypto tokens apart from the traditional crypto giants like BTC, LTC, ETH, BNB, etc. that can serve as an entry point into the crypto train. Some of these coins often referred to as altcoins have been recorded turning out massive returns on investment. There are tokens—especially in DeFi that outperform Bitcoin several folds. Amid this eruption of prices and interest, the investment community has been flocking to Zilliqa, yearning for more.

Think about it, crypto is good (even attractive), but Blockchain (the heartbeat) is even better. The good news for everyone is that crypto is just one of the many possible blockchain applications as a technology. 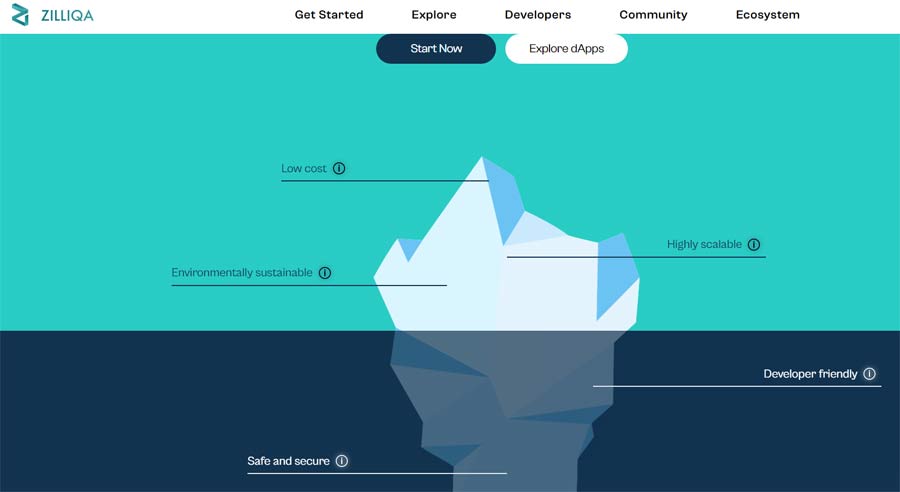 What Is the Zilliqa Protocol (ZIL Token)?

Above everything else, Zilliqa is a blockchain. That means transactions are packaged in blocks and confirmed. You’ll expect the same to happen in Ethereum, Bitcoin, and most crypto projects in the top-100.

However, what differentiates Zilliqa from the rest is its approach to scalability. To simplify, scalability is the ability of a network to handle a deluge of transactions without slowing down. The higher the throughput, the more scalable the network. For example, Bitcoin processes a mere 7 TPS—meanwhile, Visa (a centralized alternative does over 2k TPS). Accordingly, and in the above rationale, Visa is over 20X scalable than Bitcoin.

Earlier, we have seen how impactful the lack of scalability is for typical public blockchains. With low scalability, there are high fees, light dApps, and options of layer-2—calling into question the subsequent security of transactions processed through these channels.

What makes most analysts optimistic about Zilliqa price predictions, especially in the age of crypto adoption, is the project’s approach to adoption by resolving scalability challenges.

The Brain Behind Zilliqa Protocol

In June 2017, Amrit Kumar and Xinshu Don co-founded the Zilliqa ecosystem. Both Amrit and Xinshu were researchers from the National University of Singapore. Although Zilliqa’s network mainnet went live in January 2019, the project already held an Initial Coin Offering of the ZIL token in 2017 hence, raising about $22 million in ETH from the ICO.

How Does the Zilliqa Network Work?

Zilliqa rightfully takes the Sharding crown. Ethereum is trying a similar approach—most of it, however, remains theoretical. On the other hand, Zilliqa has implemented Sharding as one of its primary means of scaling. Here, the Zilliqa network operates into groups called shards—work like mini-blockchains.

Each shard has over 600 nodes and can individually—while communicating with other shards, process transactions. As such, Zilliqa can scale even as the number of transactions—or usage, increases.

To resolve potential communication problems, more than half of all nodes must agree that a transaction is valid. For this, they use the Practical Byzantine Fault Tolerance (PBFT) and Proof-of-Work, a hybrid consensus algorithm, complete with collective signing. The result is a network that can process over 2.5k transactions per second–or better directly proportional to the number of operational nodes.

In a more profound explanation, Sharding is described as a structural technique with the function of splitting the network into several pieces or shards. Thus, allowing nodes to only process a fraction of the network’s transactions.

Essentially, sharding provides the network with the power to process a large number of transactions per second at a low cost. Therefore, the introduction of sharding in the network’s operation means increasing the capacity of a blockchain relative to its increased adoption. All it takes is to increase the sharding on the network.

Thanks to the unified agreement required by pBFT, lower-powered hardware can now receive a portion of block rewards. This makes ZIL mining more cost-effective because a node that has not proposed block first can also be rewarded.

Zilliqa’s $1.1 million partnership with Traxx (NFT Music Platform Token) was done to incentivize the music industry by making it more rewarding and equitable. With that in mind, Zilliqa also aims to become Carbon-neutral by 2022. Most importantly, to be the center of the music creator economy.

As a means of accomplishing its set goals, Zilliqa plans to leverage NFTs and blockchain to reward artists and satisfy fans.

Another strategic partnership from Zilliqa includes that with PlatON Network, which is a privacy-preserving AI network blockchain. With this partnership, the Zilliqa network can be seen to have taken its first step into the Chinese market.

Zilliqa’s partnership with the PlatON network has birthed a joint launch of commemorative NFTs using the companies’ mascots. By utilizing PlatON’s wealth of social capital, resources, and network, connecting and working with these major players is possible on the journey of empowering the creator economy around the world.

Just like every cryptocurrency, the Zilliqa blockchain is governed by its native token ZIL. This token plays an important role in maintaining and operating the Zilliqa network. Users can also decide to hold, transact or stake Zilliqa tokens.

By holding and staking ZIL coins, Holders are given access to voting on proposals that revolve around network upgrades, with each vote proportional to the amount of ZIL coin staked.

Furthermore, the total supply for Zilliqa is 21 billion ZIL coins, indicating that its supply is limited. ZIL was initially launched as an ERC-20 token during a token generation event concluded in January 2018.

By February 2020, Zilliqa initiated a mainnet swap for the initial ERC-20 tokens to be swapped to Zilliqa’s blockchain. Before its initial launch, Zilliqa planned to distribute about 60% of generated ZIL tokens via the token generation event while aiming to create the remaining 40% via mining processes.

Concerning the tokens allocations, about 10% of all tokens were to be reserved for Anquan Capital, 12% for Zilliqa research, and 5% for contemporary and future Zilliqa team members. All token allocations were scheduled for distribution quarterly over three years.

The mining of ZIL coins is programmed in a way that all residual tokens will be mined within 10 years, as the block mining rewards are slowly halved with each passing threshold. In Zilliqa’s whitepaper, the team plans to have 80% of the tokens mined within the first 4 years and 20% within the remaining 6 years.

Is the Zilliqa Token a Good Investment? 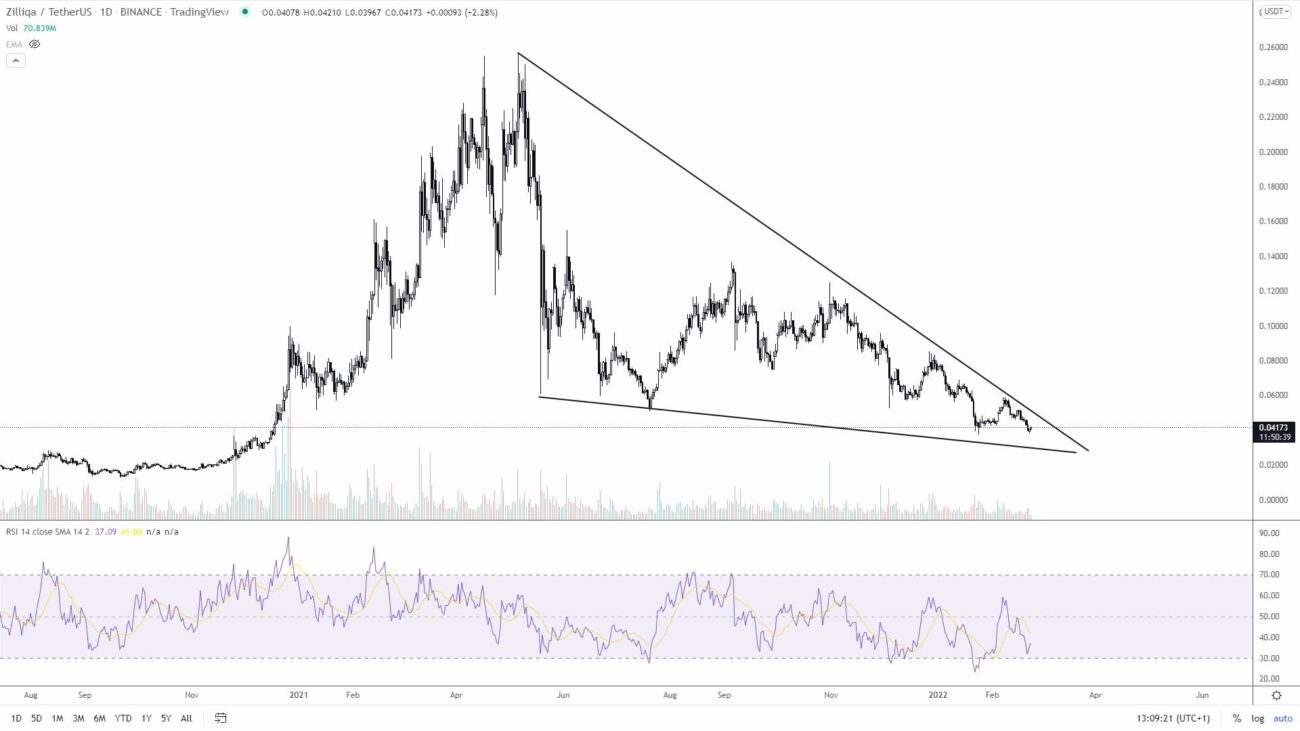 ZIL USDT chart. The price is in a huge falling wedge, a bullish pattern

The forecast done by Wallet Investor shows that the ZIL token could turn out to be an outstanding long-term investment (1-year). Going by their analysis, ZIL as an investment could yield a good return, which makes a good investment seeking to add it to their portfolio.

Going by the deep analysis of the ZIL token’s past data on price, priceprediction.net ZIL coin price forecast 2022 indicates that the token will reach a maximum price of $0.075.

Digital Coin Price is predicting the ZIL coin to reach a price of $0.0718, which is the lowest prediction we have for 2023.

According to GOV Capital, we could have ZIL coin going as high as $0.617 in 2026. That is much higher than the other three predictions we have seen so far. As for Digital Coin Price, the prediction maintains a conservative outlook with the site predicting a price of $0.094 in 2026.

Is Zilliqa worth it? Investors and traders can’t help but ask.

Zilliqa is a product with its mainnet and has an active community, a transparent team, and a vibrant DApps ecosystem.

There is DeFi, asset tokenization, and so much more.

With ZIL being the center of operation, investors are pouring in, hoping to make profits.

Judging from forecasts on Zilliqa price predictions, we can see that experts expect the ZIL token to increase in value over time. This is news that sounds good to investors’ ears and they will be watching the ZIL token with keen eyes to monitor its price movement.

Is RUNE a Good Investment?

Is SuperFarm a Good Investment?