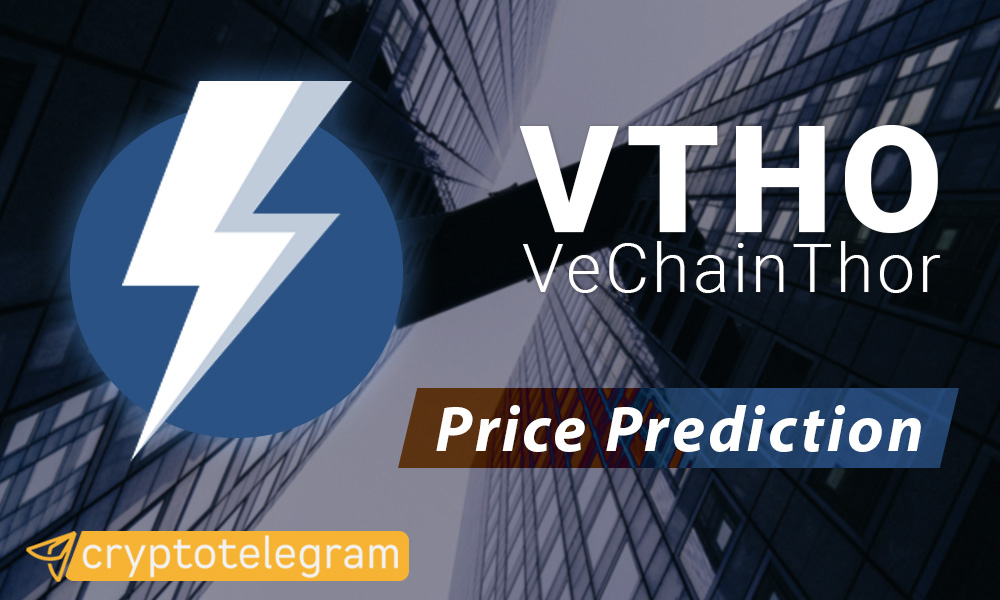 Before we delve into the VeThor price prediction, let’s quickly go over the VTHO token. The VTHO, also called VeChainThor Energy (VeThor), is a member of the dual token system that exists on the VeChainThor blockchain network.

The VTHO token is utilized on the VeChain network to power transactions. This idea is similar to Ethereum’s ether where developers have to set aside a specific amount of tokens for conducting transactions for their DApps.

According to VeChain itself, the concept of dual-token was created to instigate effective governance while creating a predictable economic model for developers of DApps. 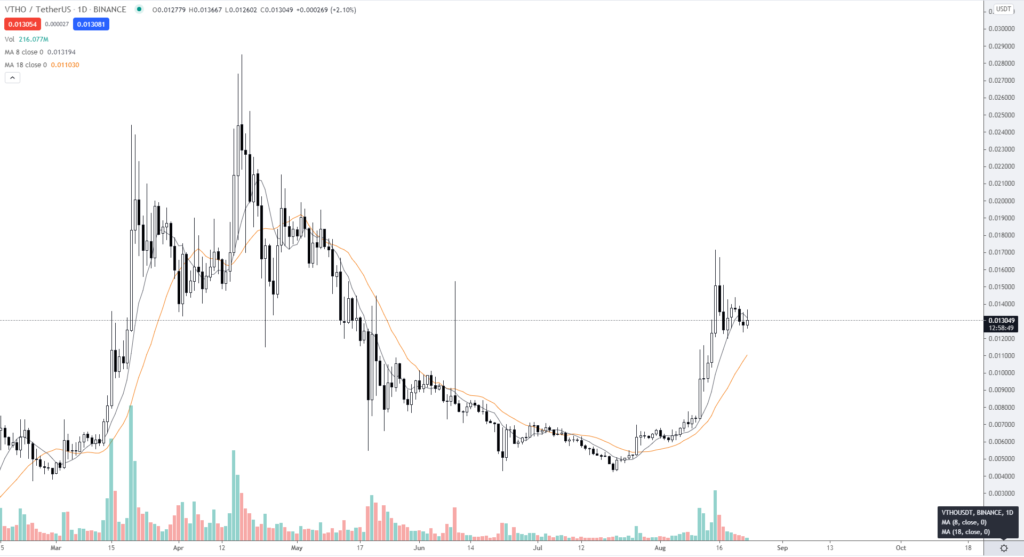 VTHO: The Gas to the VeChain Network

Just as we have it on NEO with its GAS token used for powering transactions, VeChain has a similar setup in which has VTHO and VET as its dual-token. VeChainThor Energy or VeThor is the token that caters to transaction processes while the VET token is the primary utility token on the network.

The great thing about the VeChain network is users don’t need to buy VTHO before paying for transactions. They can generate the tokens by holding their VET token in their wallet in a manner akin to staking.

So, even though VET is the main token and the default native token, the VTHO also plays a key role in the VeChain network to complete its functionality. Additionally, the VTHO is a VIP-180 standard token.

You can generate VTHO tokens through four means presently and these four methods are known as reward types. The reward types will combine to determine the total VTHO you will be able to generate. Let’s look at these reward types.

The requirement for reward type 1 is that you own VET tokens, the amount you own is insignificant and you are not required to stake them.

The requirement for reward type 2 is owning an authority node.

The generation rate here is 30% of all VTHO generated in transaction fees, which will go to all the owners of the Thrudheim Masternode.

The requirement for reward type 3 is having an authority, economic, or X Node. However, the smallest VTHO X node is not included.

The generation rate here is based on the special pool of 15 billion VET set aside by the VeChain foundation known as the Foundation Reward Pool. The VTHO generated here is distributed among those that qualify for reward type 3.

The requirement for reward type 4 is having an authority or X economic node.

The generation rate here is based on the special pool of 5 billion VET set aside by the VeChain foundation known as the Foundation X Reward Pool. The VTHO generated here is distributed among those that qualify for reward type 4.

Is VTHO a Good Investment?

According to Wallet Investor, VTHO is an awesome long-term investment and Cointobuy is echoing the same opinion. A $100 investment could give you expected earnings of +329.13% in 5 years.

As we head into our VeThor price predictions, let’s quickly look at the price predictions that we have from Crypto YouTube Channels. YouTuber Allstar Crypto believes that the VTHO token is heading for the 2 cent mark as the token looks very bullish at the moment. You can watch his full analysis here:

Another YouTuber BlueChip Life predicts the token to reach $0.02 by the end of August but if it doesn’t it is likely to stay around its current price before heading for the 2 cent mark and higher towards the end of the year. You can watch his full briefing below:

The bull run of 2021 has got many on the Twitter crypto community hyped and we head there to see what they are expecting from VTHO in terms of price.

The first user we picked up, Steven Post, is very pumped up for VTHO and he is expecting this crypto asset to reach $4.5 in the next 5 years.

Another user ShareCheck believes that the VeThor price prediction sentiment is currently bullish.

The VTHO token is currently ranked at number 122 on CoinMarketCap with a verified circulating supply of 38.95B VTHO and a market cap of $498,701,406. So, let’s see what experts have to say about VTHO price prediction and how the token is expected to perform in the coming years.

Experts at Digital Coin Price predict that the VeThor token will almost double in value to reach $0.02327 in a year’s time.

Analysts at Wallet Investor are predicting the VeThor coin to reach $0.0228 in a year to give investors an earning potential of +78.18%.

According to Cointobuy indices, the VeThor coin can yield an expected profit of +79.2% with the price reaching $0.023395.

The VeThor token started strongly on its first day but quickly declined afterward. However, 2021 has been a good year for VTHO so far and various predictions are suggesting it will finish the year with a good price value.

According to Wallet Investor, the cycle for the VeThor coin is currently bullish and that could see the coin end the year with a price of $0.0198. By 2025, the VTHO coin could reach $0.066 according to GOV Capital.

The VeThor token made a good recovery at the start of 2021 to go close to the price set in the early days. Although there has been a slight decline, experts are still predicting the token to finish the year on a positive note. Wallet Investor is predicting the VTHO coin to go as high as $0.0198 by the end of December. GOV Capital’s forecast for the VeThor coin is $0.0166 by the end of the year while the Digital Coin Price predicts the token to reach $0.0204 by December 2021.

For 2023, on the subject of VeThor price predictions, Digital Coin Price is predicting the coin to regress a bit after increasing in value. It is expecting the token to finish the year 2023 with a price of $0.0244, however, the token will reach $0.0273 around September before declining towards December.

By 2024, VTHO will have reached $0.0506 by December according to GOV Capital. Wallet Investor also tows the same line with its prediction as it expects the VeThor crypto to reach $0.05092 by the end of 2024. Digital Coin Price VTHO price prediction is less optimistic as it is only expecting the token to reach $0.0259.

Finally, for the 2025 VeThor price predictions, Wallet Investor predicts that the token will reach $0.0638 by the end of 2025. GOV Capital also holds a similar prediction for VTHO as it is expecting the token to reach $0.066 by the end of the year. Digital Coin Price is predicting the VTHO token to end 2025 with a price of $0.0368.

Will the VeThor Token Crash?

According to the experts at Wallet Investor, that is highly unlikely.

The possibility is there for VTHO to reach $1 in the future but the token will have to continue its bullish run to make that happen.

Will the Price of VTHO Go Up?

According to various predictions that we have, the price of VTHO will go up. It will keep increasing year on year.

How Can I Get Free VTHO?

You can get free VTHO by holding VET tokens in your wallet, which automatically generates VeThor tokens for you to use or sell.

No, that is very unlikely to happen in the near future.

What Is VTHO Used For?

VeThor is the token that powers all transactions on the VeChain network.

How Much VTHO Do Vets Give?

As VeChain finds more usage and increased adoption, the VTHO token could take on a more important role for traders and enterprises using the VeChain network. This could drive up demand for the token as it is needed to process transactions on the blockchain. As a result, the value of the VeThor token could increase as we have seen with the various VeThor price predictions that we have examined.

Is ALICE a Good Investment?