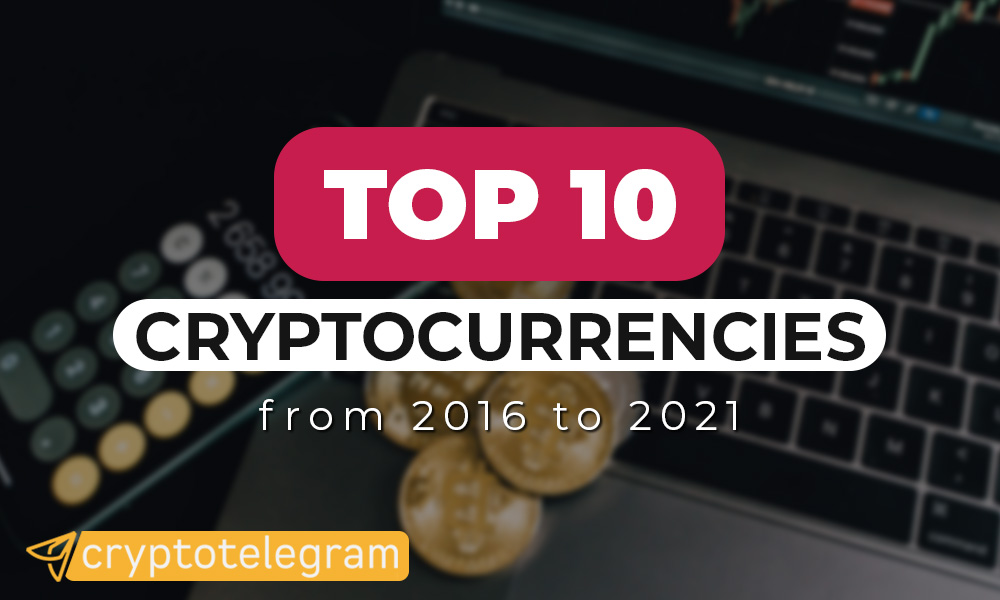 Which is a better cryptocurrency investment? Bitcoin or altcoins? Altcoins are other digital assets apart from Bitcoin. These can be Ethereum, Cardano, Ethereum Classic, Litecoin, DeFi tokens, NFTs, and others. According to CoinMarketCap, there are over 11k altcoins to choose from, all under the king, Bitcoin.

Thing is, it could be very tempting for an investor to go all-in on a project billed as the next Bitcoin or ETH. True, they may pump 500X but at the end of the day, the crater down much to the disappointment of the cryptocurrency community.

If everything is determined by the fullness of time, therefore, would you need a crystal ball to cherry-pick your crypto investment? Will you need to make guesses? Which way forward, you may ask yourself. What’s inevitable is that with every day, hour, minute, or second spent in indecision, the cryptocurrency world moves without stopping. There is money to be made from those who are hitching to lose theirs. This makes for an interesting asset class that’s continuously outperforming traditional investment vehicles a year in and out.

The Bitcoin versus Altcoins Debate

Bitcoin and altcoins do offer opportunities. Better still, either asset chosen has its value proposition. Traders angling for safety and becoming part of a battle-tested asset can opt for Bitcoin. Meanwhile, those who want more fun but with a little bit of risk can opt for any altcoins, depending on what’s trending.

Even still, when investing in a cryptocurrency, it is best to ask oneself the primary reason why one is part of the crowd. Cryptocurrencies depend on the blockchain, a new disruptive technology. Digital assets are native to the internet, serving a sphere that’s moving billions, even trillions even years. The main value proposition of cryptocurrencies is transparency, enhanced privacy, security, and digital existence. Bitcoin was the first digital asset to prove blockchain technology. Its creator tacitly tuned it to solve problems in a specific niche. Satoshi’s goal was to make Bitcoin a form of electronic money that would eventually replace the USD. Because he wanted the project to be improved, he made it open source.

It is the open-source nature of Bitcoin that saw thousands of projects fork its code and create alternative versions of cryptocurrencies. Some decided to ride on the success of Bitcoin but with a few alterations while some decided to reinvent Bitcoin. Projects that improved on Bitcoin to introduce a new better innovation like smart contracting, better energy efficiency, or complete privacy evolved to be high-profile altcoins.

Which Coin is Resilient?

For Bitcoin maximalists though, it won’t matter what altcoins bring to the table. In their hardliner position, all of them are shit coins. Still, being practical, there are some altcoins that have solutions and approach to finance or energy efficiency, for example, that’s far better than Bitcoin and do solve an existing problem reading from adoption numbers. Therefore, it is safe to say, despite opposition, all altcoins are not useless in a world where Bitcoin is king. It may be years before Bitcoin is dislodged from its mantle as the most valuable digital asset in the world.

On Twitter, one poses a question asking the community where their money would be if they were below 25 years. Would they allocate their hard-earned funds to Bitcoin or to altcoins?

In the tweet, one user replies by capturing the top-10 coins back on December 25, 2017, at the peak of the hysteric rally that thrust crypto into the mainstream. 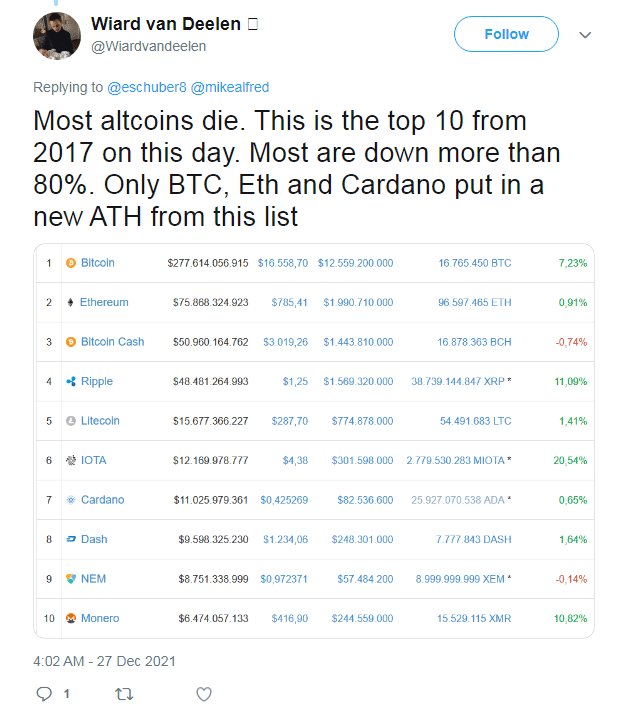 He notes that most altcoins die. True to his word, Bitcoin and ETH are still the space’s leaders with mega valuations. However, there were other altcoins like Bitcoin Cash, NEM, Monero, and IOTA in the top-10. They are, without a doubt, special projects. However, their market caps have slowly fizzled out, dying, causing holders massive losses.

This was an inspiration. We sought to check the performance of Bitcoin and altcoins over the past five years. Therefore, to satisfactorily and authoritatively answer the above question, determining whether BTC deserves a lion’s share allocation in a crypto portfolio, it only made sense to herald back in time and analyze which coins occupied the top 10 by December 25, Christmas Day, of every year since 2016. After all, numbers don’t lie and a lot could be deduced from their respective price action.

On December 25, 2016, Bitcoin had a market cap of around $14.3 billion, and barely two years after activating and surviving a hack, Ethereum’s market cap stood at a decent $626 million. In the top 10, there was Ethereum Classic, Litecoin, XRP, DASH, Monero, MaidSafeCoin, NEM, and Steem. All of them had a decent market cap and were liquid. Except for XRP, most of these coins use a more secure proof-of-work mechanism.

By the same date in 2017, there has been a realignment. Out went MaidSafeCoin, DASH, and Ethereum Classic for new projects like Bitcoin Cash, IOTA, and Cardano. Bitcoin Cash was the third most valuable project, flipping Litecoin and XRP. A few months earlier, it had forked from Bitcoin to address the low scaling and high trading fees following the ICO hysteria of the better part of 2017.

In 2018, at the depth of the bear run, Bitcoin Cash had been flipped by XRP and Ethereum. Notably, during this time, there were new players in the block replacing the likes of IOTA and Cardano. For example, the need for a stablecoin tracking the USD led to the creation of an Off-chain stablecoin in USDT. At the same time, developers had created a more decentralized version of XRP in the Stellar Network.

Another fork of Bitcoin Cash, BSV, promising even more scalability and low transaction cost, leeched value from BCH to sit at ninth in the market cap leaderboard. Meanwhile, the smart contracting sphere was heating up with Tron promising more features and scaling than Ethereum. The Justin Sun-led project was the 10th most valuable at that time.

A year later, two of Bitcoin’s forks—BCH and BSV—occupied the high table. The problem is, Ethereum was the only notable smart contracting platform apart from Tezos and EOS. Cardano and Tron had dropped down the pecking order. Their place was occupied by a self-amending platform offering more stability, energy efficiency, and value in Tezos. On the other hand, EOS was riding on its year-long ICO which raised around $4 billion.

EOS promised to be a better platform than Ethereum to introduce better scaling through its delegated Proof-of-Stake consensus algorithm. Notably, Litecoin and XRP remained while the significance of USDT continued to be more prominent, serving as a conduit to the cryptocurrency world. The rise of IEOs as alternatives to ICOs boosted Binance Coin (BNB) ‘s rise to the top 10.

In 2020, the rise of DeFi cemented Ethereum’s position as the second most valuable network while regulatory challenges saw XRP slide. Chainlink’s pronounced role as an oracle provider lifted its value to the top-10. Meanwhile, Polkadot surged to flip BSV and XTZ while Cardano’s shrewd approach to development saw its value rise. By the end of this year, USDT was the third most valuable project given its market stabilization role despite concerns about its operational opaqueness and a pending case in the U.S.

The crypto market is dynamic and investors can debate on where to put their money. However, the time has shown repeatedly that Bitcoin and Ethereum are the two safe and solid projects.

Risk-averse traders can even decide to put their money in Bitcoin because of its vertical growth, reading from its rapid growth of market cap from around $14.6 billion to over $1.2 trillion by mid-2021.

It would be easy to FOMO in and invest in an altcoin riding on Ethereum or Bitcoin brand and nothing more. Far worse, it is even riskier to invest in forks. BCH, BSV, and Ethereum Classic have fizzled out of contention, dropping down the market cap perking order—out of favor from investors.

All this time, Bitcoin remains king. Based on this, it is safe to bank on a time and battle-tested digital asset with the most attention and coverage from investors.

Is QRDO a Good Investment?