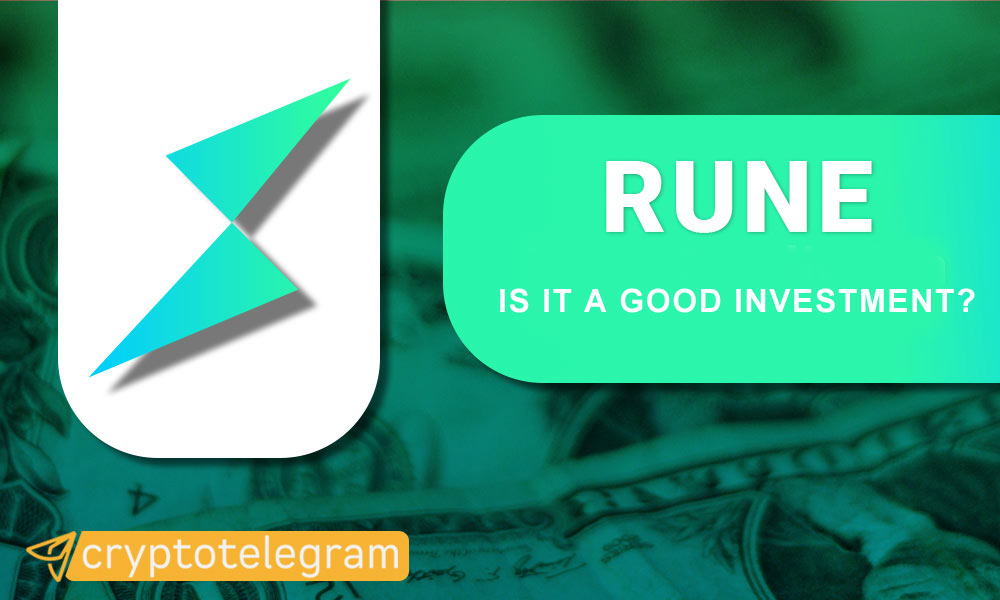 As the popular saying in the crypto community goes, “spring is the alt season”. It seems Bitcoin’s bull run tends to drag other cryptos along with it, as such; a large number of blockchain investors are turning towards the altcoins market to maximize profits. And when it comes to promising altcoins, RUNE price predictions are looking especially good.

In this article, you will find everything you need to know before making an informed decision about investing in RUNE. You will learn what is RUNE and how it works, and you will get to know the RUNE price forecasts made by the experts.

What Is Rune Protocol (RUNE Token)?

RUNE is the token powering up THORChain: a decentralized liquidity protocol that enables crypto traders and investors to effortlessly exchange digital currencies between different blockchains. Essentially, THORChain is a bit similar to DEXs (decentralized exchanges) such as Uniswap. However, while Uniswap is strictly limited to the Ethereum network, THORChain makes it easy to send assets between different networks.

The RUNE infrastructure powering THORChain is very complex and includes a large array of innovative and original solutions making crypto transactions more efficient and secure, such as the Bifröst Signer Module, on-way state pegs, and the TSS protocol. However, ordinary users do not have to waste time on technological specifications: the entire platform is designed to be maximally easy to use so that the people using it don’t need to have any technical knowledge whatsoever.

The RUNE token not only powers THORChain but also has some advanced functions. It serves as the governance token of the THORChain platform and also helps to improve its security serving as a Sybil defense mechanism, preventing nodes with less than 1 million RUNE from modifying the consensus process of the THORChain network.

One of the most impressive features of the THORChain protocol is the fact that the platform is fully decentralized, and isn’t profit-oriented. The entirety of the fees generated on the platform goes directly to the RUNE holders. There are no special incentives for the THORChain developers, as everyone is rewarded equally just for holding RUNE. 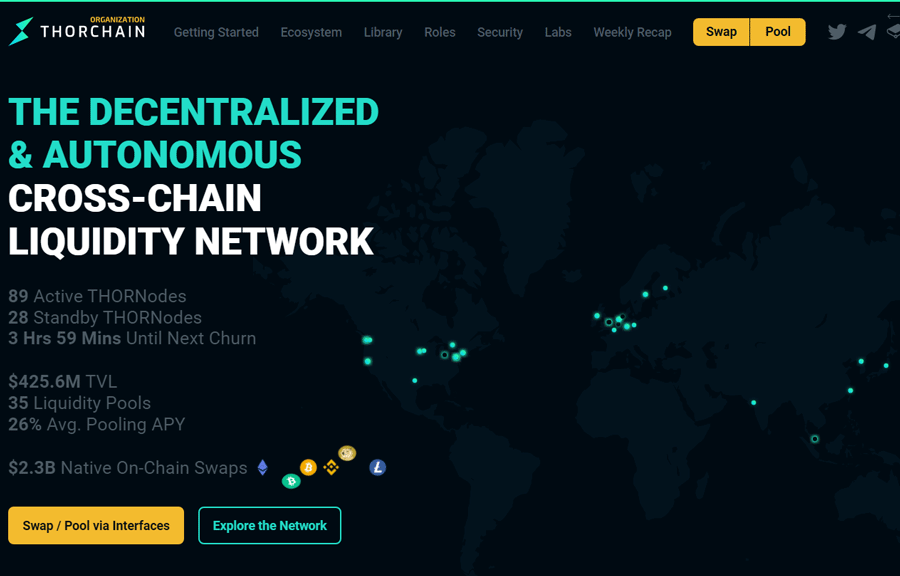 The Brain Behind Rune Protocol

The official stand of THORChain is that the RUNE platform has no CEO or executives in place. Instead, all operations and development of the platform are executed via Gitlab. Furthermore, all personnel in charge of the project remain anonymous. In addition, a representative of THORChain also claims that the anonymity of the project’s members is to protect the project and ensure its decentralization.

Information sent out by the project further explains the theory behind maintaining a project with an anonymous team. The info shed light on its operations by stating the following:

How Does the Rune Protocol Work?

Unlike other cryptocurrencies, THORChain utilizes a unique system to reduce the issues of impermanent losses. It also mitigates the often temporary losses that a liquidity provider can encounter when injecting funds into liquidity pools. This is implemented by utilizing a slip-based fee to ensure the stability of liquidity is maintained.

As a non-profit platform, all generated fees by the protocol are sent straight to the users with nothing reserved for the team. On the other hand, the team stands to earn like everyone else by simply holding their RUNE tokens.

The Rune token is made available on a couple of blockchains like Binance and Ethereum as a Bep-2 and ERC-20 token respectively.

By utilizing a couple of core technologies, THORChain ensures the functionality of the network as designed:

As specified by the protocol, the THORChain is a Tendermint-based chain that has the same infrastructure and consensus protocol as the Cosmos network. Tendermint implements its Byzantine Fault Tolerance consensus mechanism that relies on synchronicity.

It’s understandable that THORChain also operates similarly to Cosmos, THORChain caps the number of validators (100 to start) to finalize each proposed block.

One of THORChain’s plans is to execute an adapted model of Bancor’s “Smart token” for the creation of Continuous Liquidity Pools (CLPs). The purpose of the system is to incentivize users for supplying liquidity in exchange for fees and RUNE rewards. In this way, traders can easily access and exchange directly from the token pools, giving the CLPs a constant liquidity supply.

As a way of developing a cross-chain bridging system, THORChain makes use of the Bifrost protocol for its cross-chain operations. Bifrost functions by leveraging THORChain’s proof-of-stake validator set, on-chain price feeds generated by CLPs, and multi-signature (multi-sig) accounts to create and secure these bridges.

With this mechanism, THORChain can apply sharding to cross-chain ecosystems.

To achieve cross-chain swap of tokens, THORChain employs a range of innovative technologies that include on-way state pegs, a state machine, the Bifrost Signer Module, and lastly a TSS protocol. All technologies function to facilitate cross-chain token swaps efficiently. To make the platform more accessible for inexperienced users, all processes are behind the scenes to avoid complexity.

The infrastructure of THORChain is developed utilizing the Cosmos SDK while being powered by the Tendermint consensus mechanism. The purpose of this is to protect the network from attacks. The protocol is further secured using a novel BFT proof-of-stake system that involves a large number of validators working together for transaction blocks’ proposal and finality.

Behind the scenes, Rune has secured some investments from Delphi Digital and Zee Prime Capital.

The partnership between Synthetix and THORChain allows both partners to strategically implement decentralized finance to the entire ecosystem resulting in the birth of Synthetic Rune. sRune will also be listed in the Synthetix ecosystem for better price discovery. In addition, it is also the first ETH-based asset of the RUNE token.

There are a total of 500 million RUNE tokens but not all are yet in circulation.

As said earlier, THORChain was initially launched after an IEO on the Binance Decentralized exchange. During the IEO, 20 million RUNE tokens were reportedly sold and a total of 130 million RUNE sold before the IEO in the earlier funding rounds.

Official Binance DEX proposal reported 10% of the total supply allocated to the team, which was locked till after the main net launch by unlocking 20% per month onwards. THORChain’s current emission curve starts at 30% APR, scheduled to target about 2% APR after 10 years.

The RUNE token is essential within the THORChain ecosystem serving a crypto-economic function, providing incentives and constraints for network participants. RUNE token also functions in the following ways:

Is the RUNE Token a Good Investment? 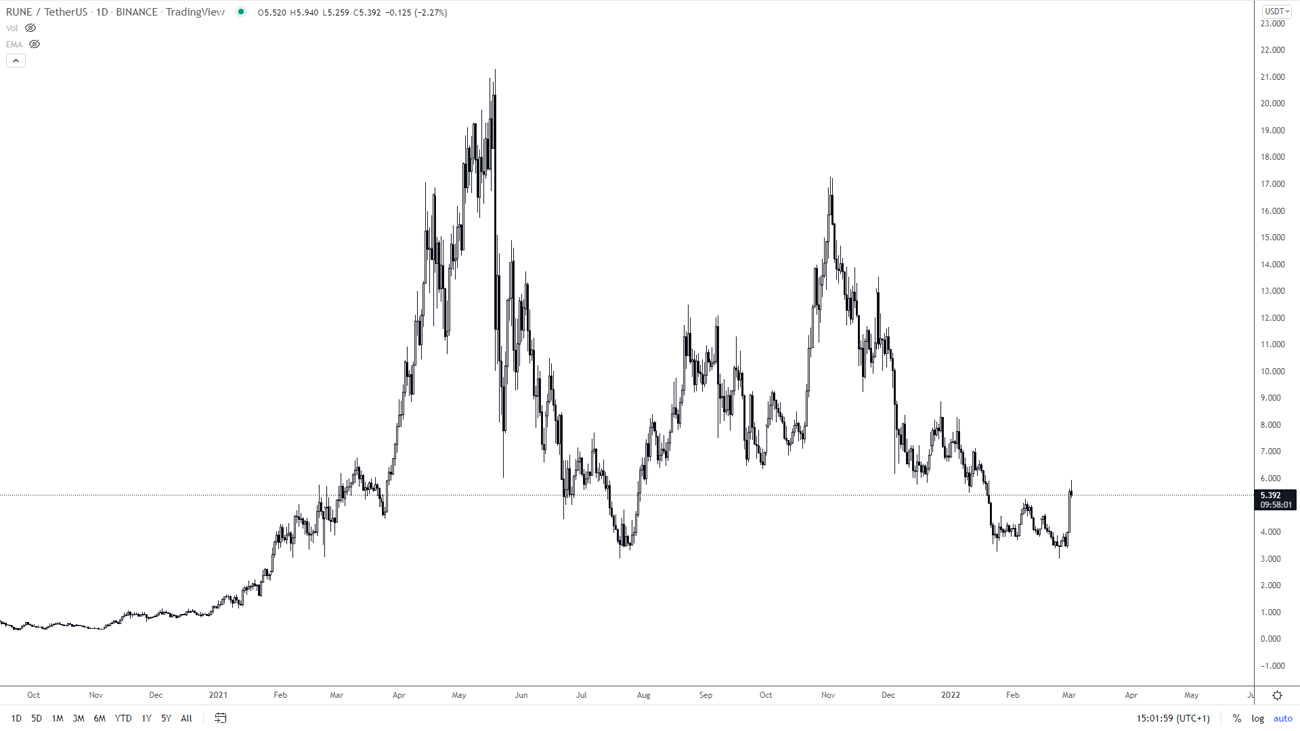 From the point of view of experts at Wallet Investor, the RUNE token could turn out to be an awesome long-term investment. According to their analysis, a $100 investment will get you about 25.984 RUNE coins at the current price as of February 20, 2022. This $100 investment could be worth $957.44 in 5 years to give you an estimated return of +857.44%. This forecast shows that the RUNE token has the marking of a good investment.

According to Digital Coin Price, the RUNE token price prediction 2022 indicates that the token could reach a price of $5.41. GOV Capital has a more optimistic prediction for 2022; their RUNE coin price forecast for 2022 is a maximum price of $16.40 by the end of December.

Going by Wallet Investor’s RUNE price prediction, the price of the RUNE token could reach as high as $11.91 by the end of the year. Tech News Leader believes that the RUNE coin has the potential to cross the $6 mark provided it can embark on a good bull run in 2022. The average price could be around $5.82. Priceprediction.net is predicting a price of $6.29 as the maximum price for the RUNE token in 2022.

By 2023, we could have the RUNE token reaching as high as $9.03 and that is according to Priceprediction.net. Tech News Leader holds a similar prediction. Their RUNE price prediction 2023 shows that the token will reach a maximum price of $9.71.

GOV Capital has another ambitious RUNE coin price forecast for us, it is predicting the RUNE coin to reach a maximum price of $40.34 in 2023. On the other hand, Digital Coin Price prediction is a modest one with a price prediction of $6.50 for the 2023 RUNE token forecast.

To round it up for 2023, Wallet Investor is predicting a maximum price of $18.83 for the RUNE token.

Back to Wallet Investor, their 2026 RUNE coin price prediction is a maximum price of $43.62 by the end of December. Digital Coin Price is predicting a price of $7.65 for RUNE token in 2026.

In 2030, the token is expected to keep its upward momentum going with Priceprediction.net predicting the token to reach a maximum price of $106.30 by 2030. According to Tech News Leader, the RUNE token could reach as high as $122.66. Digital Coin Price has a price prediction of $18.97 for the year 2030.

The RUNE price growth has been incredible so far. The token powering THORChain has shown through the various price predictions that we have seen that it can be among one of the profitable crypto investments. RUNE is one of the tokens for which the phrase “sky’s the limit” actually seems true – nobody can be 100% sure how high can RUNE go.

So far, the RUNE coin price predictions we have seen suggest an upward movement for the token and the project. That is something investors will be keen to keep an eye on to know how it plays out for the RUNE coin.

Is ESBC a Good Investment?

What Is Zilliqa (ZIL) And Is It a Good Investment?