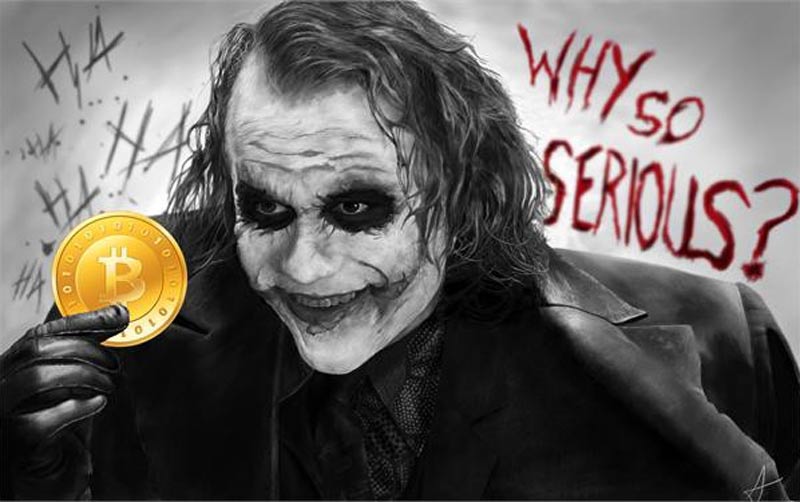 It happens only once a year. On Apr 1. Crypto is on a roll and there are simply too many moving part to make jokes on.

We have gathered the best: From Peter Schiff, Google, to Elon, and Filecoin to Craig Wright.

1. Peter Schiff is a crypto critic–did it get people flat-footed?

When it comes to Bitcoin critics, Peter Schiff is as prominent as it gets.

On April fools day, he tweeted: “I was wrong about #Bitcoin.”

I was wrong about #Bitcoin.

This tweet caused some hype within Crypto Twitter. It got 50,000 likes, which is high for that account. It was not lost on some, however, that Schiff is an outspoken Bitcoin critic.

His son, Spencer Schiff, recently decided to move 100 percent of his portfolio investments. The news had to sting because Schiff does not believe in the long-term viability of Bitcoin. He even referred to his son as brainwashed!

Ironically, Schiff is also a believer in alternative assets. He champions ancient precious metals and has founded Schiff Gold and Euro Pacific Bank. Perhaps he has a vested interest in opposing Bitcoin because it has been dubbed “digital gold.”

Therefore, his April fool’s day joke was bound to draw significant attention. In his usual stubborn self, Schiff doubled down on Bitcoin criticism in a reply to the tweet clarifying that it was a joke.

Last year, Schiff criticized Bitcoin vigorously but had to watch in dismay as the coin quadrupled. How long will his defense hold? Is it a genuine belief, or is it borne out of the need for self-preservation?

2. Bitfinex Super Pizza? Did You Fall for This?

How about a bit of nostalgia?

The Bitcoin community widely recognized Laszlo Hanyecz’s purchase of two pizzas for 10,000 Bitcoins as the first act of Bitcoin commerce.

This transaction is memorable today because that amount of Bitcoin makes a person an instant millionaire. May 22, 2010, is forever etched in Bitcoin’s history as “Bitcoin Pizza Day.”

This transaction may have happened with little fanfare, but its significance in Bitcoin’s timeline is massive. There may have been a humorous tinge to the transaction because no one knew what Bitcoin would become. Laslo may rue the amount he spent, but he surely can’t be too bummed at the unassuming celebrity he has become.

Bitfinex, cognizant of this transaction’s impact, tweeted that they would be opening a chain of Pizza restaurants in hour of this moment.

The tweet was intended as a prank, but it caught the imagination of many crypto enthusiasts.

BREAKING: 📣 This summer, Bitfinex will launch a chain of Pizza restaurants in honour of Laszlo Hanyecz who purchased pizza for 10,000 #Bitcoin.

🍕The chain will be called #Bitfinizza, and you can buy pizza using Bitfinex Pay! pic.twitter.com/asUua5gfcf

Bitcoin has grown exponentially in its dozen years of existence. The appreciation since the historic pizza purchase has been better than anyone could imagine.

Bitfinex may have only been floating the idea for an April fool’s laugh. Regardless, it would be cool if someone actually launched a Pizza chain that takes up this brand. They would probably have to accept payments in Bitcoin for consistency.

3. Google buying Bitcoin? It Had me too

Institutions can’t get enough of cryptocurrency.

This asset operated in the fringe corners of the internet in its infancy. The recent scramble for the pioneer crypto is a proper home run.

Additionally, dozens of hedge funds and companies are exploring Bitcoin as a reserve asset.

So strong is the hype that some decided to join the fun on April 1st.

Bitcoin Meme Hub tweeted that Alphabet Inc. had purchased 150,000 BTCs, worth about $8.8 billion.

You would be forgiven for taking this as fact, and why not?

This is a large tech company, always forward-thinking, and with the willingness to explore new frontiers. That sounds like a match made in heaven for Bitcoin. Besides, this news would check out after Tesla made a splurge on Bitcoin.

Oops, as it turns out, it was no more than a fool’s day prank.

That said, this wasn’t believable a year ago. The fact that Bitcoin is this popular shouldn’t be taken for granted. Wall Street now has to pay attention to Bitcoin as it does to blue-chip stocks.

Maybe, there will soon be a true announcement by Google that they have actually splashed some billions on Bitcoin. Till then, take care!

Then there was a joke about Filecoin (FIL) crashing.

Promising? Absolutely! But what about prices crashing on Apr 1? It wasn’t expected, especially when the project had attracted mentions from crypto personalities, including the Winklevoss Twins.

Avoid FOMO at all times. pic.twitter.com/FauEpd1sE8

Less than 24 hours earlier, Cameron Winklevoss was boasting of how Filecoin “is climbing to the moon.”

And indeed it had been. A few days earlier, Filecoin was on an absolute tear.

Here’s how: In 30 days—throughout March, the FIL/USDT price rose 8X, rallying from $30 to $240, effectively making the coin one of the top performers of the month.

In fact, the rapid expansion of the Filecoin price saw it rise to the top-10 of the market cap leaderboard. It was unprecedented, for sure, and well-deserving, especially when investors/traders box in exactly what the project seeks to achieve.

Filecoin wants to decentralize data storage by using the blockchain and a new architect called Interplanetary File Storage (IPFS) system. They were the first to implement this system, baking in some interesting aspects borrowed from Bitcoin like halving and mining.

For this, it is popular in China.

Being the year of the Ox, Filecoin traders and investors are, nonetheless, upbeat.

But how ironic for FIL to end the month with a 30 percent crash!

Well, after all the dust had cleared, the news of the crash remained what it was; a joke.

The identity of Satoshi Nakamoto remains a mystery. Despite concerted efforts to reveal the face behind the elusive genius, no researcher has been successful. And it better remains that way, most crypto community members maintain.

Why is that the case?

Satoshi holds an approximated 1 million BTC, translating to around $60 billion at spot rates. If his identity is cracked, the odds of the Bitcoin price crashing due to liquidation fears will be high.

Even so, Craig Wright continues to assert that he is the face behind Satoshi. He has been given several platforms to prove this but has failed to present private keys required to move any of the 1 million BTC the crypto community says belongs to Satoshi.

Therefore, for Calvin Ayre, one of Craig’s supporters, to respond to a Coinbase explainer that Wright is Satoshi was enough of a joke. Betters, some Bitcoin responded that perhaps for Calvin Ayre, every day is a fool’s day for believing in Craig Wright’s claims.

But, who are we? We maintain a neutral side.

Unless Craig proves his claims, the crypto community won’t believe him. Every other Fool’s day, Craig’s fans insist on him being the True Satoshi will therefore remain as another joke.

6. Elon Musk Joins the Ripple Board of Directors; Not too Loyal

This was a good one.

The controversial, centi-billionaire, and crypto’s most famous promoter, Elon Musk, was reported to be joining the Ripple Board of Directors! How fitting!

Better yet, how unexpected?

Fact is, he didn’t! Simply too surreal to be true.

Elon Musk is too Doge; he’s the godfather of Dogecoin, and apparently, a Shiba Inu lover.

Therefore, for him to turn his back on Dogecoin for Ripple is hard. However, according to the tweet, everything is apparently possible, and Elon has switched sides.

It would actually be massive for Elon to join Ripple now that the blockchain-based payment company has legal issues with the U.S. SEC. Holding XRP, the regulator claims is holding unregistered securities. Brad Garlinghouse, Chris Larsen (official board members), and Ripple were sued by the SEC.

The case is ongoing—the good news for the crypto world—Ripple might actually win!

The question is: How would it have been if Elon was actually part of the fold and being sued by the SEC? Interesting, wouldn’t it?

The billionaire has been sued on several occasions by the SEC for misleading investors. Being sued once more for selling XRP securities would be that extra sauce.

Till then, Musk will keep flirting with Doge and Bitcoin.