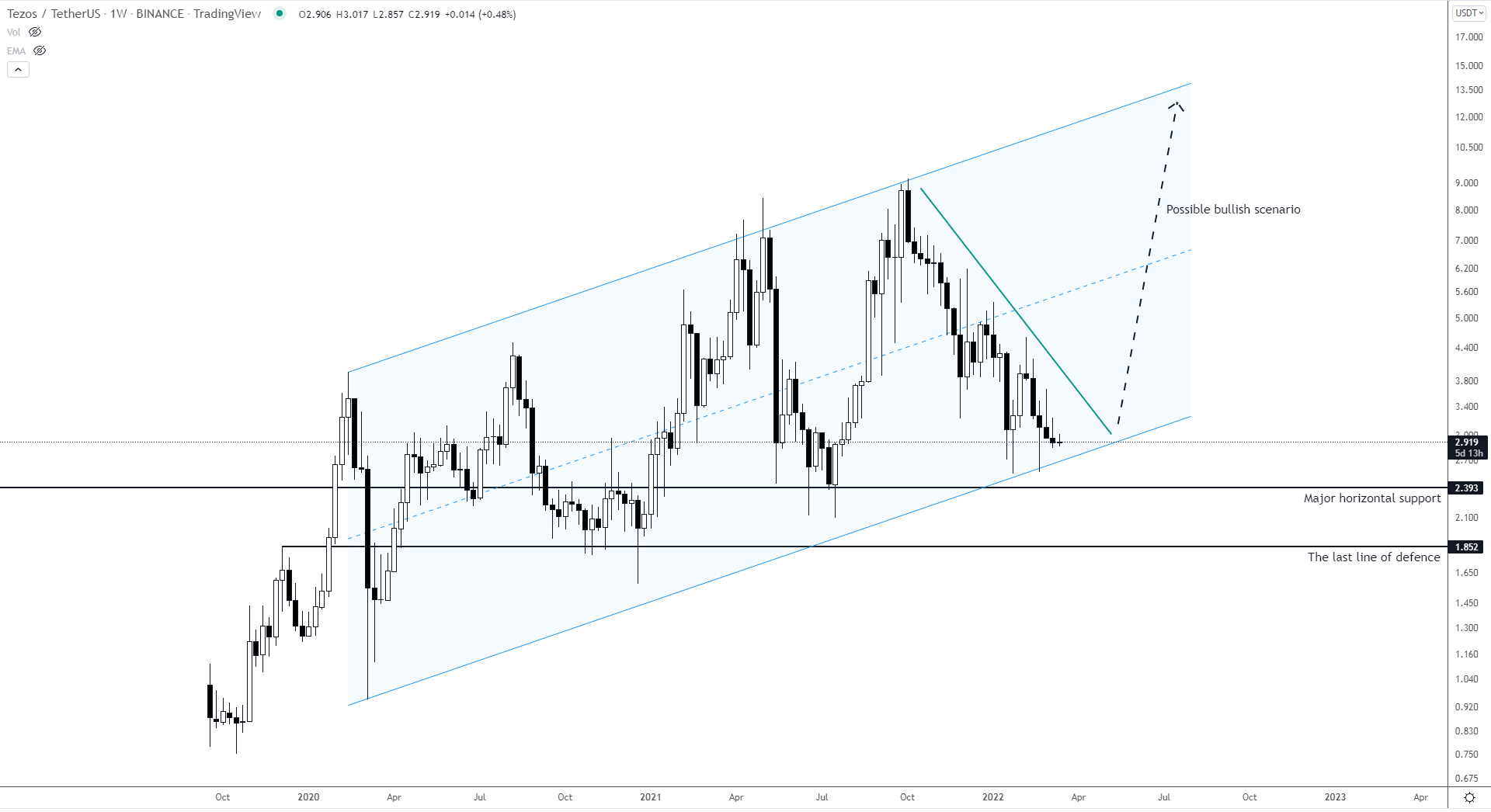 Tezos prices continue to trickle down, more than halving after peaking in Q4 2021. Like the rest of the cryptocurrency market, the coin is under immense pressure but losses are not as steep as other altcoins.

XTZ prices topped at $9.1 in early October 2021 on the back of strong waves of buying pressure. However, the coin has since retraced to spot rates, dumping 60 percent to trade at around $3 by mid-March 2022.

Even so, Tezos is forwarding a unique value proposition, strongly supportive of XTZ prices. In this XTZ price prediction article, we lay out a case for traders to keep close eyes on Tezos in the medium to long term.

The Tezos’ price performance has been exemplary in the last three years where it rolled 32X, reaching $9.1 in early October 2021.

Since then, XTZ prices, mirroring the general trend in the crypto market, have posted healthy corrections, dropping to as low as $2.6 in January 2021. By mid-March 2022, XTZ prices have recovered, adding 22 percent with added signals that buyers stand a chance.

Even so, Tezos prices are still capped below the 200 MA suggesting that sellers have their hands in the mix, slowing down optimistic buyers. 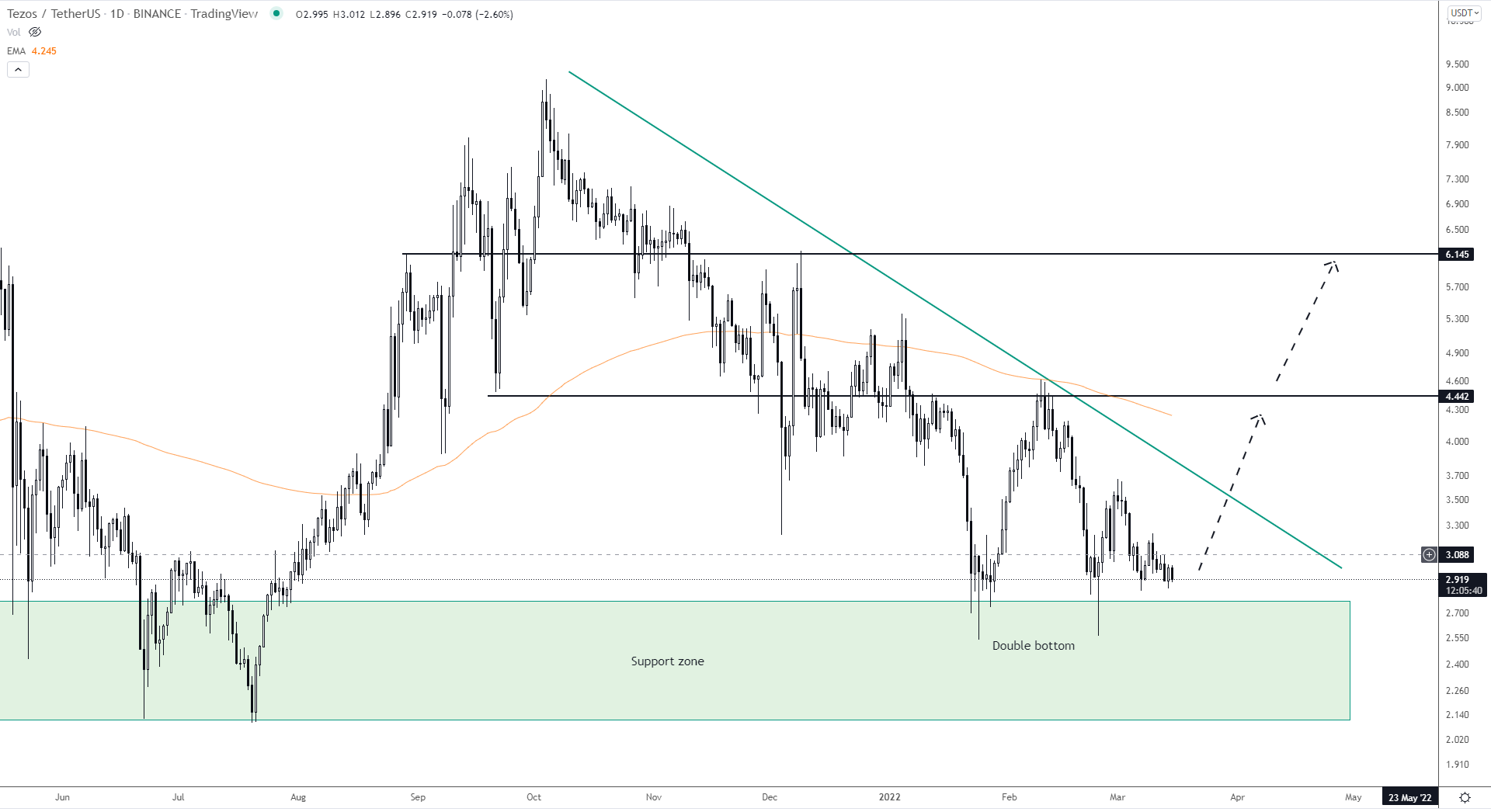 XTZ prices are in a strong downtrend but have found support at a critical level. Based on the development in the daily chart, there is a possibility of a double bottom printing from around 2022 lows at $2.6. If buyers take over, there should be a strong bounce above this level as prices also surge, breaking above the green resistance trendline.

In that eventuality, Tezos prices could tear higher, facing inevitable resistance at the 200 MA – a major resistance level. A close above this mark and beyond the $4.4 and $6.4 horizontal resistances,, XTZ prices could easily glide to print new ATHs.

Conversely, if Tezos price breaks down below the support zone at $2.6 as mentioned earlier, it would drop from the major channel that will be seen on the weekly chart, puncturing bulls’ hope as XTZ prices fall into a dungeon where it would take extra efforts for buyers to reclaim initial resistance levels.

The XTZ price is within a long-term ascending channel.

If the price breaks below the channel, it would hit the major horizontal support at around $2.39 and could bounce off this crucial level. If that happens and the price manages to go back to the channel, it’s a good signal for Tezos in the long term. However, should sellers flow back, there is a high probability of XTZ sinking to as low as $1.85, crashing bulls.

The $2.6 level is an important support line marking 2022 lows. A close below this support zone could trigger a sharp sell-off as XTZ registers new 2022 lows.

XTZ has an immediate resistance level between $4.4 and $6.4, flashing with the 200-day moving average in the daily chart. A close above this liquidation zone may be the base for a leg up towards all-time highs of $9.1.

Tezos is battle-tested and proven to be a worthy blockchain. According to Coin Bureau on YouTube, XTZ could be grossly undervalued and may recover as NFTs blossom on its network. Staking is also considered a deterrent against mass-selling which weighs down bulls.

The inevitable adoption of Blockchain technologies is the big bang that will lift Tezos higher, accelerating the recovery according to Altcoin Buzz analysts. The partnership with Ubisoft is massive and XTZ–being a multi-purpose coin–would benefit immensely as the ledger is already proving to be a robust building layer for developers.

Will Tezos price go up?

Tezos is a top smart contracting platform and one of the most liquid in the sphere. As a reliable and secure platform, its utility will translate into tailwinds for XTZ prices. Already, the project has attracted quality partners and is one of the most active networks for launching dApps and NFTs, explaining why traders expect XTZ to rally.

Is XTZ going to crash?

XTZ price is only down because the crypto market is cooling off after sharp gains from late 2019. During this time, Tezos prices raced 32X before retracing to spot rates. The role of the blockchain in the ecosystem, the level of activity of the network, and the billions in market cap tied to Tezos are evidence that XTZ may remain suppressed as long as the crypto market is under pressure but not crash to zero.

How fast XTZ recovers and closes above $9.1 would determine the pace at which the coin surges to $15. This target is not lofty and represents the 1.618 Fibonacci retracement of the 2019-2021 trade range. A strong recovery from mid-March 2022 to above October 2021 highs would likely propel XTZ to $15 and beyond in a buy trend continuation pattern.