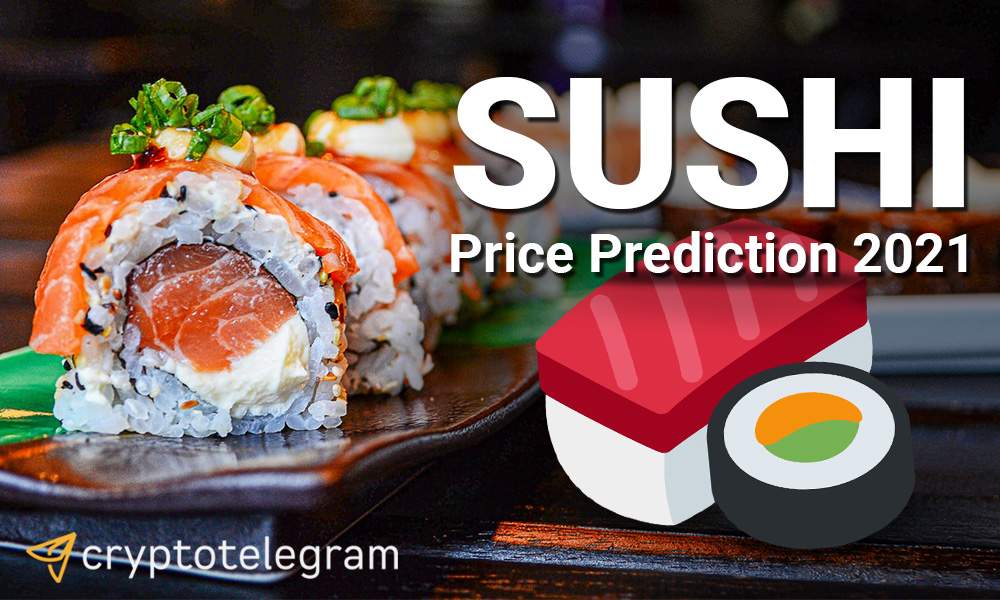 The Automated Market Makers (AMM) such as SushiSwap has grown in popularity within the last few months. This shows the level of changes that are occurring in the cryptocurrency world as a result of DeFi.

One of the most popular AMM is SushiSwap, so it’s not surprising that its native token SUSHI is one of the hottest investments in the crypto market. Lots of investors and speculators are curious how high the token can go, so that is why we are bringing you this compilation of SUSHI price predictions for 2021.

During the initial stage of launching the digital coin, SUSHI dropping from $46 to less than $1. This moved was influenced by no other person than the creator of the platform, Chef Nomi.

Recall that Chef Nomi, the controversial creator of SUSHI, had last 2020 September withdrawn over 20,039 ETH and 2,558,644 SUSHI from the dev fund, a fund that was to finance the development of the project.

A move which was noticed by Spencer Noon, the head of DTCC Capital.

Anonymous founder of @SushiSwap sells all of his $SUSHI 🍣

However, following the move by the SUSHI creator, the project was handed over to FTX CEO Sam Bankman Fried on Sept 6, 2020, in an unexpected takeover. This move took place after SUSHI price fell from $9.5 to $1.13 in just five days, losing over 88 percent of its value.

This unexpected acquisition is rumored to be behind the latest surge in cryptocurrency SUSHI, which appears to have restored investor confidence in the network.

Please save me from a bad $SUSHI investment @SBF_Alameda. He is our new master chef.

Although SUSHI price did not have an easy start, it has recovered and had a good end in 2020 and early 2021.

Before talking about SUSHI price prediction for 2021, we will explain the basics of the project. As you know, it is very important to study and do research before making any investment.

Let’s start with some basics.

SushiSwap is a decentralized exchange (DEX) created from a fork of Uniswap. It allows users to trade cryptocurrencies without the need for a central operator administrator.

What is SUSHI Token?

SUSHI is an ERC-20 token that is issued on the SushiSwap DEX to the liquidity providers.

The coin is earned in SushiSwap by providing a liquidity pool, and it can also be staked in exchange for SLP tokens, which are used to govern the protocol.

The goal of the SUSHI token is to reward the users of the protocol. The token achieves this by allowing a user to earn a cut of SushiSwap’s fees even when they are no longer providing liquidity to SushiSwap’s pool. Users can achieve this by staking SUSHI to earn more SUSHI.

In clear terms, SUSHI is a governance token that allows community governance over SushiSwap, and it offers users rewards for staking SUSHI tokens.

History of The Project

The history of Sushi is very controversial. SushiSwap started gaining public attention around August 2020 when crypto Twitter revealed that it was working on using liquidity provider tokens from Uniswap to deposit on a forked platform offering a better incentive.

At that time, most crypto experts termed it “vampire mining.”

However, the way it was going to operate was later revealed on august 26, but it has been removed since following the controversies that happened some weeks later. The revised version was later reposted here.

Chef Nomi, an anonymous figure, created SUSHI. His plan was to build something that is similar to Uniswap but with a more user-friendly community.

Shortly after, 0xMaki, another anonymous figure, joined along to build SushiSwap. Most of the community members recognize him as the co-founder of the protocol.

However, they could both handle the code, product development, and business operations of SushiSwap.

As we have commented, after what happened with Chef Nomi, the de facto ownership of SushiSwap was passed to Sam Bankman – Fried, CEO of derivative exchange FTX. Bankman is a well know crypto enthusiast.

SUSHI price started surging early last December 2020. This could be attributed to some mergers that SUSHI entered.

Recall that in December, Andre Cronje, the founder of Yearn finance, revealed that SushiSwap would be merged with the team of Yearn.finance.

The partnership has so far yielded a positive result as the price of SUSHI has been surging since the merger.

Being a new project, by the end of 2020, the native token had not been available for trading on many cryptocurrency exchanges.

Therefore, we analyze the market predictions of leading analysts and summarize them in our SUSHI price prediction for 2021.

Analysts at  Digitalcoinprice, who specializes in cryptocurrency forecast have made their SUSHI token prediction for 2021.

They expect the price to rise to $14.22 at the end of the year with the Price increasing at 64.26%, the Digitalcoinprice’s forecast can be attributed as a frankly bullish run.

WalletInvestor based their forecast on technical analysis by artificial intelligence. Their analysis shows a massive improvement in the DeFi token.

Their forecast for 2021 shows a bullish run. WalletInvestor sees the Sushi price rising by over 40%.

The experts at Gov.capital, based their price prediction on technical analysis. For 2021, they expect the price to continue its bullish run.

In summary, Gov.capital analyst believes that SUSHI could remain stable in the coming years.

CoinArbitrageBot forecast gives green light for SUSHI coin investment as it expects the price to rise in the long run.

The analysts at CoinArtrageBot believes that the coin could still fall to around $5.85 or rise to $7.15 during 2021.

Changelly forecast is based on the market analysis of the services that provide data based on Al calculation.

The prediction website analyzed the data from different markets. And based on their technical analysis, the analysts at Changelly thinks that the price of SUSHI could rise to as high as $4 under favorable condition.

(Changelly’s forecast fell short, as this value was far exceeded in January 2021).

YouTubers and Their SushiSwap Price Predictions for 2021

Furthermore, Alex Saunders of @Nugget’s News believes that SushsiSwap will have an impressive bullish run in 2021.

The popular YouTuber made the forecast in a youtube interview with Altcoin Daily – another popular crypto YouTube channel.

According to him, he says that the merger between Yearn Finance and SushiSwap could bring new innovations to the Project.

You can see the interview here:

We have also checked the opinion of people regarding the SUSHI price for the year on Twitter. Among all the tweets that talk about the subject, we have chosen the most interesting.

One of the tweets was from Joy Bangla, a trader, and analyst who asked his followers what they think about the price of SUSHI in return for a reward.

Predict day close price of $sushi by DEC 18th 2021. #SushiSwap . Put your prediction below as comment to win Super Algorithm. One winner to be chosen at random.

As seen in the tweet, most voters think that the price of SUSHI will exceed $20 in 2021.

Also, another tweeter user who goes by username @BBHodler thinks that the coin will hit $11 by the end of the year,

in his tweet, in addition to the price of SUSHI, he predicts the price of 13 more cryptocurrencies, it will be interesting to see when the year ends if he has been correct in his forecasts.

Among the most optimistic, some Twitter users were forecasting a rise in SUSHI for 2021 to $ 45.

SUSHI could be a Worthwhile Investment

In summary, according to the opinion of different platforms, investors and influencers predict an upward projection for SUSHI and SushiSwap in 2021.

So, without a doubt, both SUSHI and SushiSwap should be closely followed in 2021.

1inch Explained: Is It a Good Investment?

Blackrock Is Ready to Invest in Bitcoin