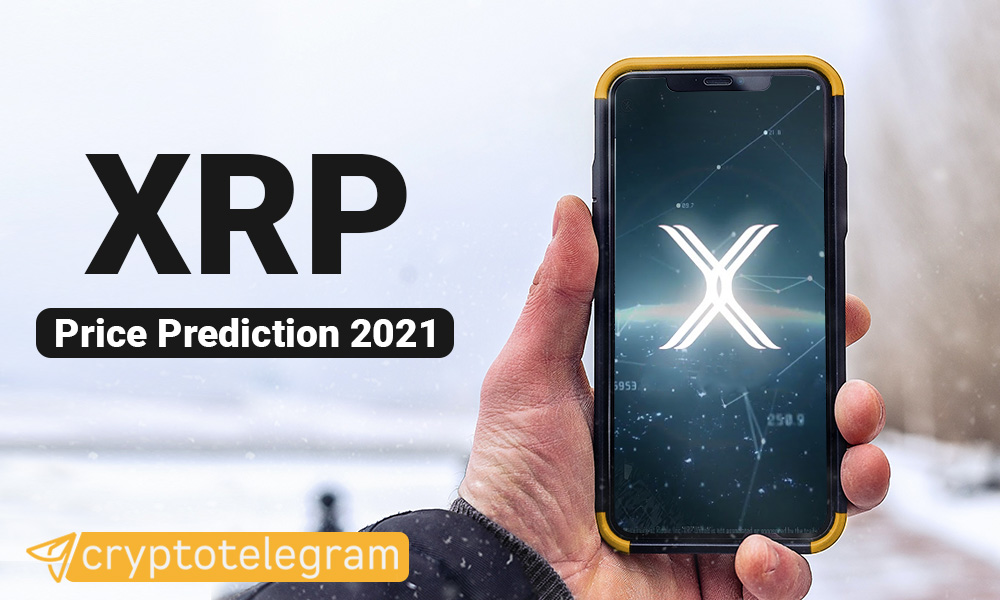 Crypto is on fire. Market participants are eager to know how leading blockchain projects like Ripple will perform in the months ahead. Specifically, given the current legal woes Ripple finds itself in, analysts’ Ripple price prediction for 2021 matters.

Ripple project is different from Bitcoin. The platform’s creators introduce blockchain to banking, creating a cheaper system to transform legacy payment as we know.

Their track record and success over the year explains the significant expansion of XRP prices in 2020. Despite hitches, traders are optimistic about what lies ahead and are subsequently pushing out positive Ripple price forecasts for 2021.

One of the main reasons why XRP prices rose in 2020 was the number of bank partnerships. Notably, the rise of financial institutions willing to adopt one of Ripple’s products: On-Demand Liquidity (ODL). The solution uses XRP for cross-border value transfer.

In 2020, for instance, there was a spike in the number of transactions within the US-Mexico, US-Philippines, and US-Australia corridors. With partner exchanges like Coins.ph and Bitso in the Philippines and Mexico, people could send funds cheaply and instantaneously.

Under the Trump administration, the traditional money transfer giant, MoneyGram, received Ripple funding in exchange for ODL integration. Note that Ripple bought MoneyGram shares at a premium, causing a rally not only for XRP prices but for the money transfer giant’s shares.

Coupled with the increasing calls for inter-blockchain DeFi and the Flare Network’s support, the XRP prices pumped in Q4 2020. Through the Ethereum-based Flare Network, ordinary users would use XRP coins as collateral to access services such as lending and more in Decentralized Finance (DeFi).

In the run-up to the Flare Network snapshot of XRP balances, the XRP prices rose to around $0.78.

However, an unexpected allegation by the United States Securities and Exchange Commission (SEC) that XRP was security saw prices dump to below $0.20 from over $0.78 in days.

According to the SEC, XRP complies with the Howey Test. This three-step criterion determines whether an asset is a security or a utility. The agency also added that Ripple, Brad Garlinghouse, and Chris Larsen—the CEO and co-founder of Ripple, illegally crowd-funded $1.3 billion by selling securities.

In their assertion, the SEC claims Ripple must comply with their laws like any other stock or bank. This is a significant blow for XRP holders who, technically, find themselves holding potential securities.

Ripple lawyers recently filed a response. They are requesting all information about the SEC classifying Ethereum (ETH) as a utility coin like BTC.

In the background of this news, the XRP price rose and is stable in early 2021.

Beyond the lawsuit, Ripple’s fundamentals are solid. Their inroads in Japan and agitation for more exact laws in the United States—as a San Francisco-based company- show they want to disrupt banking for years to come.

Overly, Ripple wants to transform banking by fronting their superior solutions to clients.

This explains the tremendous success of the XRP coin in 2020 and the years since its launch. For perspective, the XRP market cap is one of the largest, lodged in the top 10.

Therefore, it is only natural for savvy investors and traders to inquire about the project, closely monitoring what analysts think of the project based on their Ripple price forecast for 2021.

A Brief History of Ripple (XRP)

To understand XRP, we have to cycle back to 2012 when it was launched by Jed McCaleb, Arthur Britto, and David Schwartz as OpenCoin. They bought it from a Canadian developer called Ryan Fugger, who had named it Ripplepay.

Ripple is based on Ripplepay’s source code, but the team created the open ledger (XRPL) powering XRP. They pre-mined 100 billion XRP coins, of which Jed McCaleb owns 8 billion. He frequently sells them.

ODL uses XRP, a coin running on the public blockchain, the XRPL. The ledger is open-source and receives funding from Ripple.

Of interest for traders and investors is how well ODL—the solution integrating XRP, will perform. Besides speedy settlement of transactions, ODL eliminates the need for pre-funding accounts in foreign destinations.

The perfect gauge for this is the adoption level by banks. As more banks use ODL, the more there is demand for XRP. The coin acts as a bridge, converting fiat currencies via partner exchanges cheaply.

Compared to SWIFT, the ODL transaction settlement time is at most four seconds.

The question is: Has RippleNet been a success? Supporters would say yes, but with room to grow, there is more. By the end of 2020, over 300 banks connecting to the RippleNet.

One of Ripple’s executive, Asheesh Birla, said the focus in 2021 would be to push for ODL adoption. They will be aggressive in their marketing, hoping to on-board more financial institutions.

Here’s what he said:

“With the cryptocurrency product, you can send to I believe three destinations around the world. We’re expanding that aggressively in 2020 and 2021. We are going to continue to expand ODL, On-Demand Liquidity. I mentioned this is in a few countries as destinations. We want to get global coverage of that where possible by the regulators.”

ODL is the key to XRP’s success, and mass bank adoption will see an exponential expansion in prices. With high trading volumes capping 2020, a surge in XRP prices, and Ripple’s plan, analysts’ price forecast for 2021 is understandably very positive.

There is a pending court case that will likely go to trial. However, XRP and Ripple are among the oldest projects in crypto, and investors keep up on tabs.

Coinbase, Bitstamp, and a few others halted the trading of XRP, but there are more others like Uphold who stood firm.

Even after this minor liquidity disruption, the over 320 unique XRP markets explain the 300 percent increment of trading volumes in Q4 2020.

Investors are unyielding, traders bullish, and Ripple facing off with the might SEC is determined. Will XRP/USD prices rally in 2021?

We gather some of the XRP/USD price predictions from the market as follows:

According to the Rating giant, blockchain standards will improve in 2021. The XRP price is now in the top-10 by market cap, and as per price trends and partnership projections, the XRP price will easily reach $2 by the end of 2021.

The former Goldman Sachs executive says XRP was his first purchase, and prices would rise with the Bitcoin tide. He told PrimeXBT that the XRP price could be ready for a 1,500 percent price increase by the end of 2021, thanks to the rallying Bitcoin price. The 150X surge lifts XRP back to $4.5, a new all-time high.

Basing their XRP/USD price prediction on technical analysis and artificial intelligence, the popular asset prediction site forecasts XRP price to reach$0.411 by the close of the year.

Raoul confident of Ripple, recently explaining that they even have a shot of winning the SEC lawsuit. The reason? Well, Ripple Labs didn’t hold an ICO, unlike Ethereum, and Ripple holding XRP coins doesn’t imply that owners have a right to revenue and other rights. XRP, in his view, is not an investment vehicle, a fact that will pad XRP’s prices, especially if Ripple wins.

Per CryptoBusy, Ripple is a fundamentally solid project explaining why it is a top-10 project. He identifies a discrepancy in SEC’s allegations, adding that Ripple does most of its business outside of the United States. In his view, the Ripple-SEC lawsuit will probably be settled out of court, a net positive for XRP price. Accordingly, the XRP/USD price might close above $1, a psychological resistance in 2021 but with more room to rally to a new all-time high above $3.

YouTuber Craig Percoco compares XRP to the state of Tesla in 2018 when people were dismissing it, shorting the stock. XRP has far more upsides and could reach $1-$2 for the year and $100 in the next few years.

Meanwhile, Make Money Online analyst says XRP can reach at least $100 by the end of 2021. This is simply on the coin’s value proposition and their goal of disrupting banking by creating a DLT-based internet of value. Besides, most XRP holders are in for the long haul and aren’t willing to sell for quick profits.

Like YouTube, Twitter is full of Ripple price forecasts for 2021. There are, nonetheless, diverse opinions of where prices will go in the medium term. We took some of the best.

MagicPoopCannon, a famous crypto technical analyst, thinks the XRP price is ready for an epic explosion and can reach $9 by the end of the year. He says XRP has real utility with people using the technology.

#XRP looks like it's on the verge of an epic explosion. My target for a moonshot rally is $9, where I think we could see a strong pullback. If that happens, I honestly believe XRP could rally upwards of $20, with a final target around $50.

#XRP is in the process of repeating the 2017 fractals. Everything points to a $15 price end of January and close to $100 by end of July 2021. pic.twitter.com/ErFqHHPYgG

From the opinion of analysts across different social platforms, most are bullish on Ripple.

Based on their Ripple price prediction for 2021, most appear confident, saying the blockchain company will against the SEC. If they do, the XRP/USD price will most probably soar above the psychological $1 in a moonshot.

So, is XRP a worthwhile investment? Based on investor and trader sentiment, yes. However, practice caution and do your due diligence before trading or investing.