The Polkadot price, at the time of writing on Dec 31, is trading at around $7.9 after breaking above a key resistance level, breezing past a $2 consolidation, and nearly doubling from December lows of around $4.5.

Fanning bulls is the high participation as signaled by the high trading volumes and the long, conspicuous bull bars suggesting demand in lower time frames.

For what has been an eventful year, the coin is one of the top performers this week, even flipping ADA to sixth with a market capitalization of $7.1 billion.

By surging 11 percent on the last day and adding 63 percent week-to-date.

From the daily chart, the path of least resistance is clear: Northwards.

Buyers have the upper end. As long as prices are trending higher, sustained by determined bulls, every low is a loading opportunity.

In the medium term, traders should be watching the reaction of DOT bull bars from the upper BB, the squeezing of the BB, and whether the $6.1 previous resistance, now support, hold.

Technically, based on the trading range between October and November, the second bull target after prices hit $7 is the 2.168 percent Fibonacci extension level at $10.

Polkadot is an interoperable blockchain with sidechains (parachains) that can scale networks by several folds. It launched in 2020 and has since found immense success.

For instance, on launch data and after re-denomination, the Dot price roared to $49—as per Kraken data, before shrinking to $2.7 in mid-August.

Since then, the recovery has been smooth. After days of consolidation, the breakout above the $2 range in late December may provide hints of what is to come.

So far, developers have been active, contributing code. There are over 500k lines of code on their Rust Language programming source code.

Meanwhile, the Kusama and Polkadot Treasuries have funded 63 projects. It is in addition to the $4.1m granted to 145 proposals done as part of Web3 Foundation’s ongoing grant programs.

This is the future! #Polkadot pic.twitter.com/10SjeS9HSj

Besides, the project is attracting sponsors. The latest to join is Arrington XRP Capital led by Michael Arrington.

Bridging the #Huobi & @Polkadot community
together in promoting Polkadot dev.

In 2021, the CEO of Three Arrows Capital, Su Zhu expects more projects to get funding and launch from within the Polkadot ecosystem.

Things I'm excited about for next yr:

Price-wise, leading analysts are confident 2021 will be the year of DOT. In the immediate term, the coin can rally to $10.

#Polkadot will probably be one of the strongest cryptocurrencies in 2021.

Broke upwards and made an all-time high.

This chart shows the levels to watch for potential dip opportunities before it continues its run towards $10. pic.twitter.com/mioI6wCZca 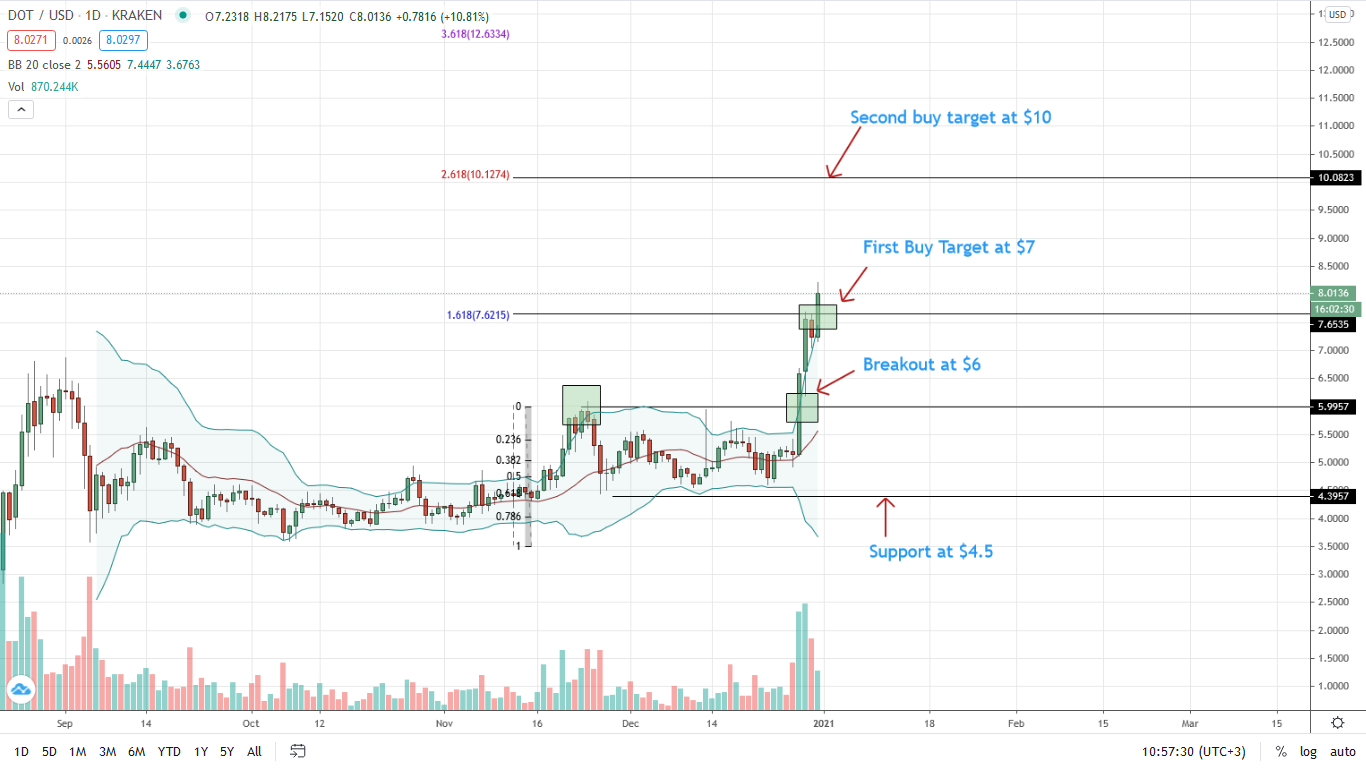 The DOT price is trading within a bullish break-out pattern confirming gains on Dec 28.

Marking the surge is an uptick in trading volumes confirming buyers and demand. With the first target met and candlesticks banding along the upper BB, every low, for buyers can be an opportunity to load up more with the second target at $10.

The targets are based on the October to November 2020 range. It is from here that prices in December oscillated before finding support and reversing from the 61.8 percent Fibonacci retracement level.

If prices contract, the immediate support will be at $6. It is the previous resistance, now support, marking the Nov 2020 high.