Polkadot serves as an interoperable alternative to Ethereum.

Its creators assert that the platform is the home of quality projects.

The base layer is scalable, secure, yet flexible.

Customizable projects—Parachains—can launch with their consensus style of choice and, better yet, their preferred tokenomics to incentivize participation.

That’s why days after announcing their Parachain slot auction—and it will be competitive—DOT prices expanded.

At the time of writing, DOT is firm in the top-10, adding six percent week-to-date.

Traders expect the uptrend to continue in the weeks ahead, throughout Q4 2021 to early 2022, when the first batch of auctions ends.

This fundamental factor alone could pump DOT to new highs, judging from the candlestick arrangement in the daily chart.

Already, there are hints of strength. 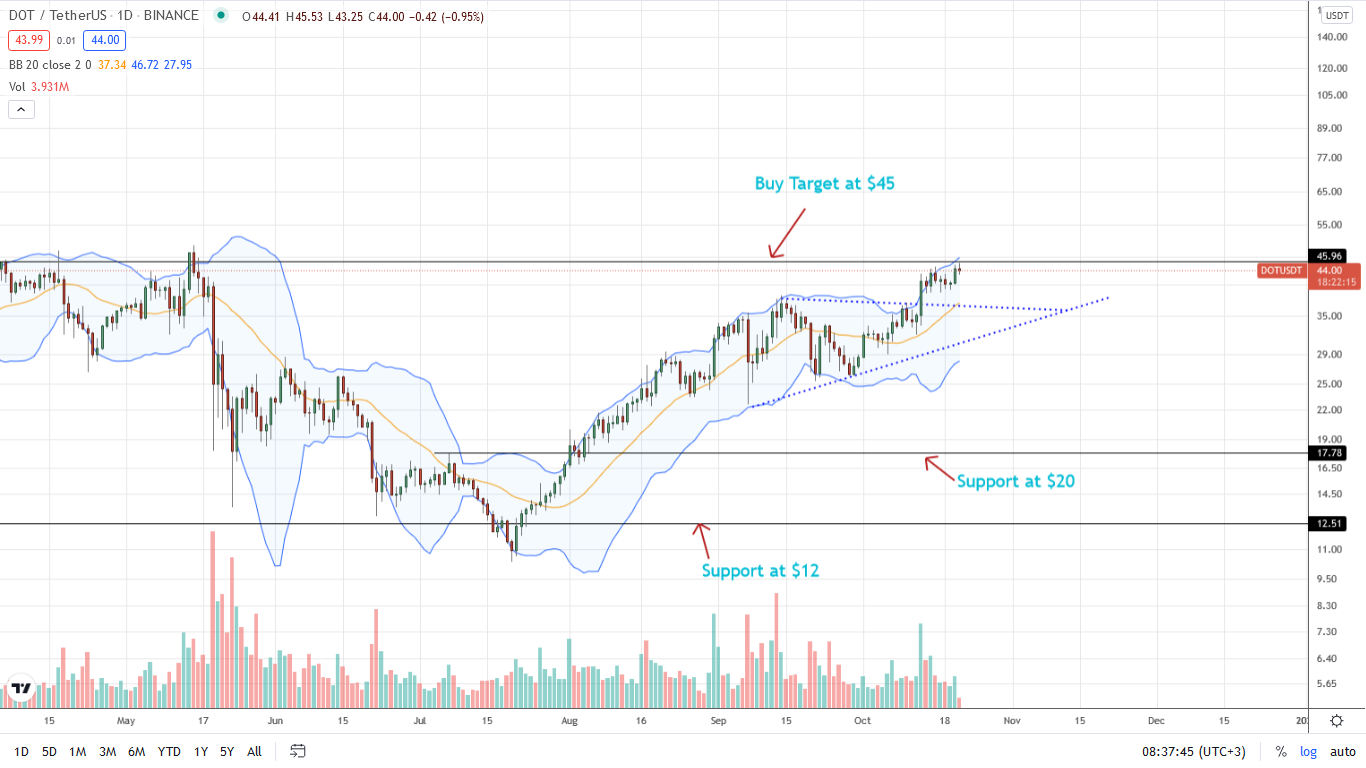 For example, after days of hesitation and sideways movement, the rising tide in the crypto market pumped DOT bulls on October 20. At the time of writing, DOT bulls are on the cusp of breaking into new 2021 highs.

In this new zone of price discovery, the next leg up might see DOT’s valuation expand rapidly, even placing the coin in the top-5.

Should that be the case, DOT could rise more than 55 percent from H2 2021 highs, an unprecedented rally that could boost the project’s position in the space.

On Trading View, one trader notes that the DOT/USDT pair is breaking out above an ascending wedge, a pennant.

Besides, there is a bullish MACD crossover in the bullish territory combined with the EMA 50 acting as support; DOT prices stand to erupt in the upcoming sessions.

Per the analyst’s prediction, DOT prices would likely break above the recent highs to race, reaching $60.

One of the reasons why Polkadot is pumping, the trader relates, is the expansion of Bitcoin.

The positive correlation between BTC and altcoins helps in this cause, fueling the demand that lifts Alts above immediate resistance lines.

Polkadot Prices Look Good, Back to $76?

On Twitter, a trader thinks DOT prices are at a good place.

In a bullish breakout pattern above a key resistance trend line, the trader thinks DOT/USDT prices would blast above the immediate resistance line at $45 to reach $76 in a buy continuation pattern.

As mentioned earlier, $76 flashes with the 1.618 Fibonacci extension line of the 2021 trade range—and is, thus, a vital reaction point.

In a recent Token Metrics interview, Bill Noble thinks there are more upsides for DOT than in Bitcoin.

Accordingly, in his estimation, the coin might print new all-time highs at $80—a Gann resistance level—in the short term once it clears $44.

Bill cites the activation of Parachains and more other projects coming to Polkadot.