In the age of interoperability, Polkadot is a cut above the rest.

The co-founder, who happens to be behind some of Ethereum’s critical differentiators like smart contracts, is bringing forth a solution that will eventually connect most disparate blockchains.

Polkadot has subsequently garnered attention and value, making it one of the most popular coins among traders.

At the time of writing, Polkadot is sinking under the weight of sellers.

Down eight percent on the last trading day, DOT’s trading volumes are also down 31 percent to $1.15 billion.

Even so. It remains in the top 10 of the crypto leader-board, flipping some of the industry’s titans like Bitcoin Cash.

Nonetheless, sustained bear pressure even amid exciting developments, especially planned activation of parachain auction slots projected to be a massive tailwind for the project, may push the coin lower, outside the top-10. Still, reading from the chart, there might be hope for traders. 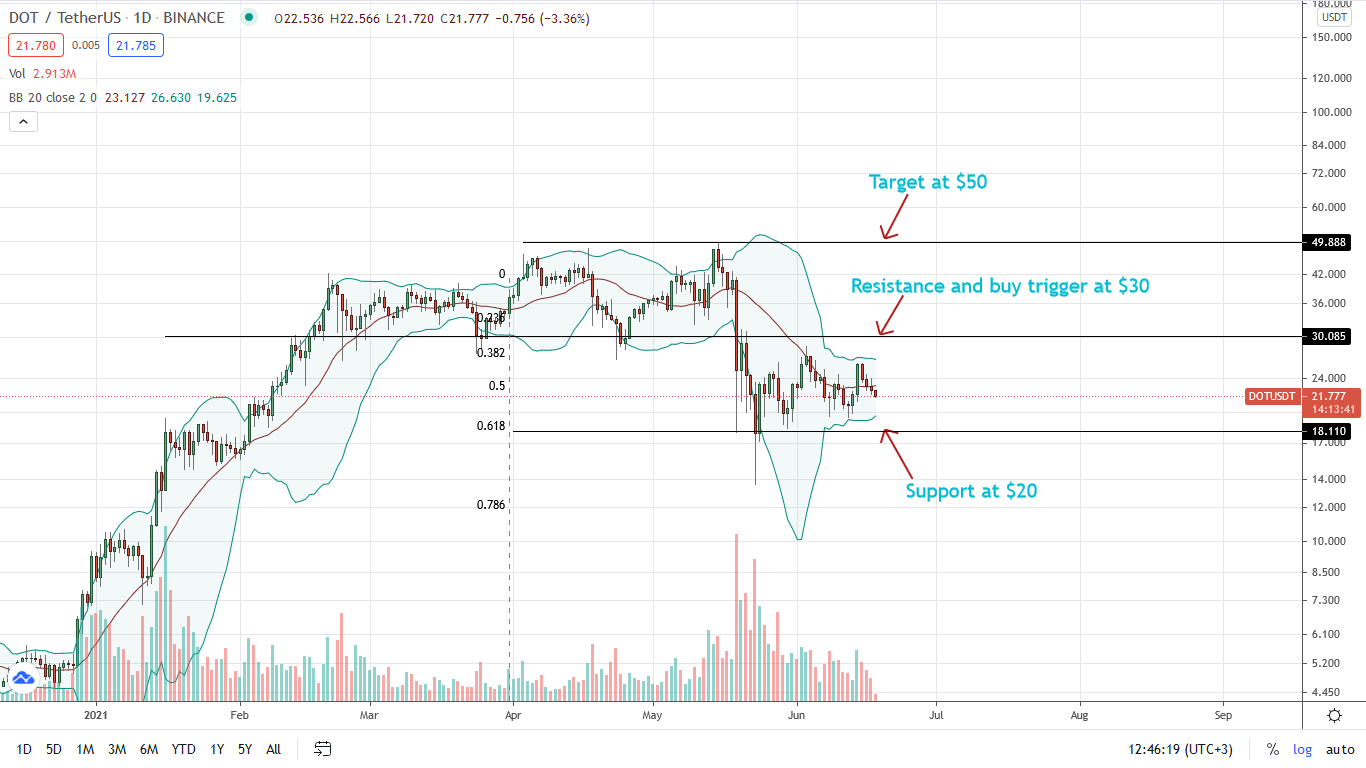 For instance, even with losses, DOT/USDT ranges inside June 14 and May 24 bull bars. Technically, this is a net positive from an Effort-versus-Results point of view.

DOT prices are below the middle BB and discouragingly defined by May 19 bear candlestick from a top-down analysis.

As we advance, it is imperative that bulls clear the immediate liquidation line—the 20-day moving average—and specifically, $26—this week’s highs. This way, DOT bulls stand a chance of forging towards $30 and even $50 in the medium term.

On Trading View, one trader, T_V_TreeTrader, says DOT/USDT prices will pull higher towards $28 after recent corrections.

Based on the 4HR chart, the analyst notes that the coin has broken above a descending wedge, reversing losses and pushing DOT bulls ahead.

Given the state of the market, DOT/USDT prices could race towards $30—the first psychological resistance level–, setting the pace for more gains as read from price action in the 4HR chart.

It is the same position held by another trader, realMarketSurfer, who also took note of the bullish breakout above the bull flag.

Accompanying the up-surge is a build-up of momentum, as the RSI indicator shows. The shift in momentum coupled with favorable candlestick arrangements in a market that many traders expect to recover is perfect fodder for aggressive bulls.

The analyst also identified $30 as the first level of resistance and target for bulls, ramping on the pullback.

Polkadot Rise to $50 will “Take a while”

Over to YouTube, a trader, The Art of Crypto, is trending higher following listing at Coinbase.

However, in the daily chart, DOT has reversed sharply from the 200-day moving average—a key resistance—previous support line.

A conclusive break above this mark—at around $27– may lift DOT higher towards $40– and even $50. Still, the 50 and 100-day moving averages would be the immediate resistance levels.

Furthermore, he observes that “money” is flowing out from DOT. The good news is that Polkadot may find support, but the race to $50 and a new all-time high “would take a while.”

Bitcoin Cash Analysts Rooting for Bulls, A Route back to $800