The central selling point for Polkadot is on true interoperability—a feature sorely missed.

Because of this, it explains why DOT is one of the top performers in the top 10.

Week-to-date, DOT/USDT is up 20 percent, breaking even versus the USD on the last trading day. Polkadot buyers appear determined to absorb all selling pressure.

At the time of writing, DOT prices are back to July 2021 highs.

Considering the upswing of the past two weeks and the swelling confidence across the crypto market during the same periods, the odds of DOT/USDT breaking above this liquidation line at $20 and potentially more than doubling to $50 in the coming sessions remain high.

Technically, the candlestick arrangement in the daily chart favors buyers.

Because of upbeat traders, the underlying momentum is strong. 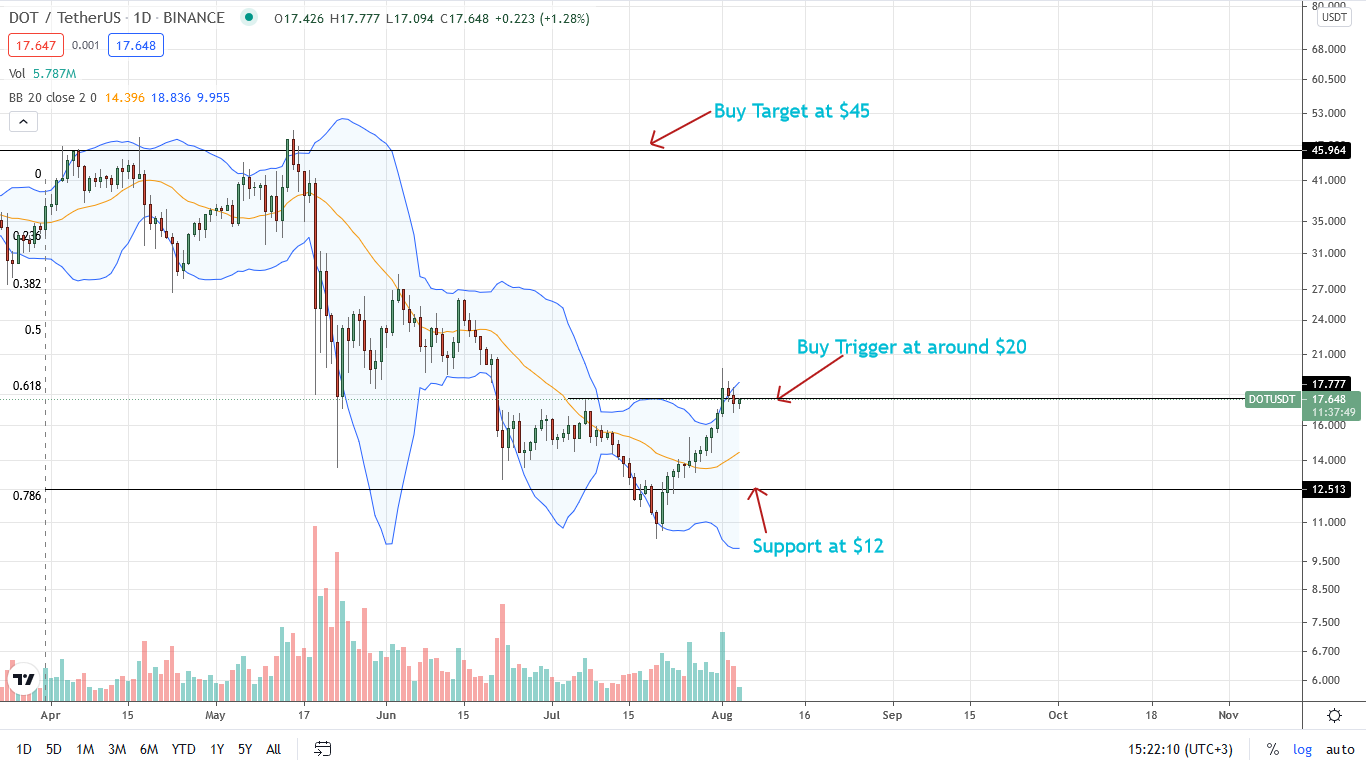 DOT/USDT bull bars align along the upper BB, suggesting an influx of buyers in lower time frames. Besides, there has been a notable spike in trading volumes in the last two weeks.

The double bar bullish reversal pattern at $12 seemed to have triggered demand, paving the way for determined buyers to double down, sensing bottoms.

DOT prices bounced back from the 78.6 percent Fibonacci retracement level of the H1 2021 trade range—a crucial level. If history guides—and the uptrend sustained, DOT prices could expand back to H1 2021 highs of around $45.

On Twitter, one trader is “very bullish” on Polkadot prices.

Very bullish on $DOT #Polkadot
– Broke out of the blue resistance line and has found support
– Hidden bullish divergence on the 4h, looking at the orange lines

Based on the 4HR chart, the analyst said odds of prices breaking above the bull flag in a buy trend continuation pattern remain high.

For instance, the stochastic—a momentum indicator– is oversold and bottoming up. At the same time, there is a bullish divergence between DOT prices and RSI during the same time frame.

Meanwhile, in the daily chart, there is a bullish crossover between the 20 and 50 EMA.

The $16.93 level had acted as a stiff resistance between June 22 to July 8 but the bulls propelled Polkadot (DOT) above it on Aug. 1, which is a positive sign. pic.twitter.com/aVpqN0E7fU

Additionally, the breach above the 50 EMA also put buyers firmly in control in a bullish breakout above July 2021 highs.

While DOT/USDT prices are still stagnant at spot valuations—failing to follow through Aug 1 bull bar, this buy signal could be the base for more upswings in the next few weeks.

Moving Average crossovers often form a core strategy for most traders. Even so, the use of moving averages means the strategy is lagging.

Another trader is also optimistic about Polkadot. He says this is the best time to look at its ecosystem as DOT prices start gaining traction.

He describes Polkadot as a “strong” project. Therefore, at spot prices, after the deep correction of the last two months, offer an excellent opportunity to buy.

As an altcoin, DOT prices and overall performance are indirectly linked with Bitcoin. If Bitcoin reaches an all-time high, the trader accesses that DOT would also likely rally to $50 and further to $100 for a 5X at spot rates.

Ethereum Ready for a Moonshot, ETH/USD Prices Set for $2.9k?