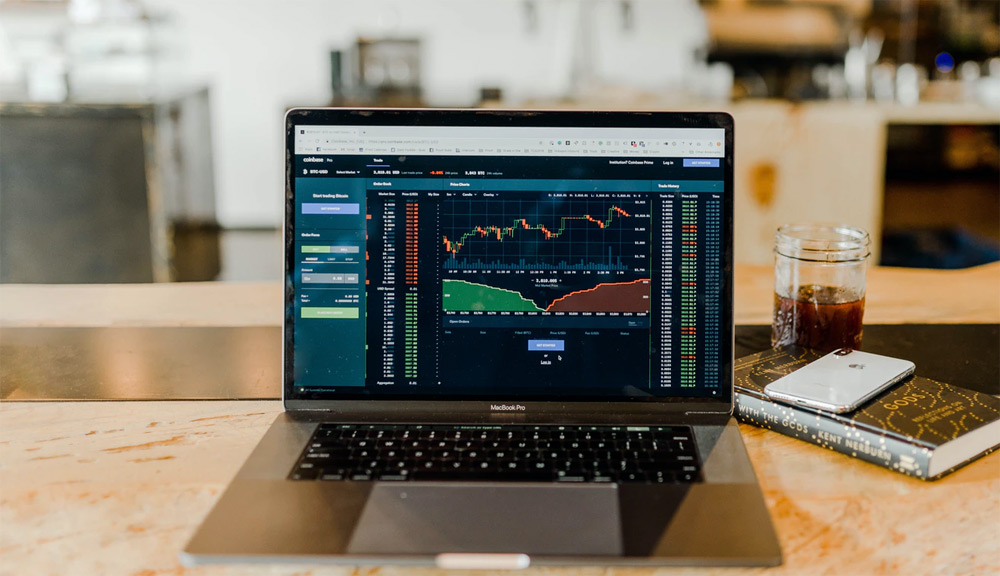 The Litecoin price is at around 2021 highs, defying gravity. Traders are having the time of their life. And why not?

Litecoin has been on a tear.

For traders who love reading correlations, closely and actively tracking relationships between assets, it is clear that Bitcoin and Litecoin are directly coupled.

Bitcoin silver stands to gain provided BTC is blasting above resistances—like it has been the case in the past few months.

At over $330 a pop, the LTC price is up an impressive 7X in the last year of trading and 46 percent week-to-date.

What’s piquing interest is the emergence of DOGE as a Top-5 contender. The “joke” crypto rise has come as a blessing for Litecoin miners.

It doesn't matter if you like #Dogecoin or not.

It's good for the King of Scrypt, #Litecoin – So merging mining with dogecoin would make both litecoin/dogecoin almost impossible to 51%.

As you would probably know, Litecoin is a Scrypt heavy-weight, just like Bitcoin leads in the SHA-256 encryption technique.

The fact that $LTC miners make more money merge-mining $DOGE instead of $LTC is hilarious to me pic.twitter.com/peAC8q83KU

Talking of prices, there could be more upsides for LTC.

Technical analysts on Trading View are confident that the LTC/USD buy trend is just getting started.

While some traders play cautious, some are already placing targets at more than 2X spot rates.

For instance, MikesJakub expects LTC to reach anywhere between $700 and $1k this cycle. 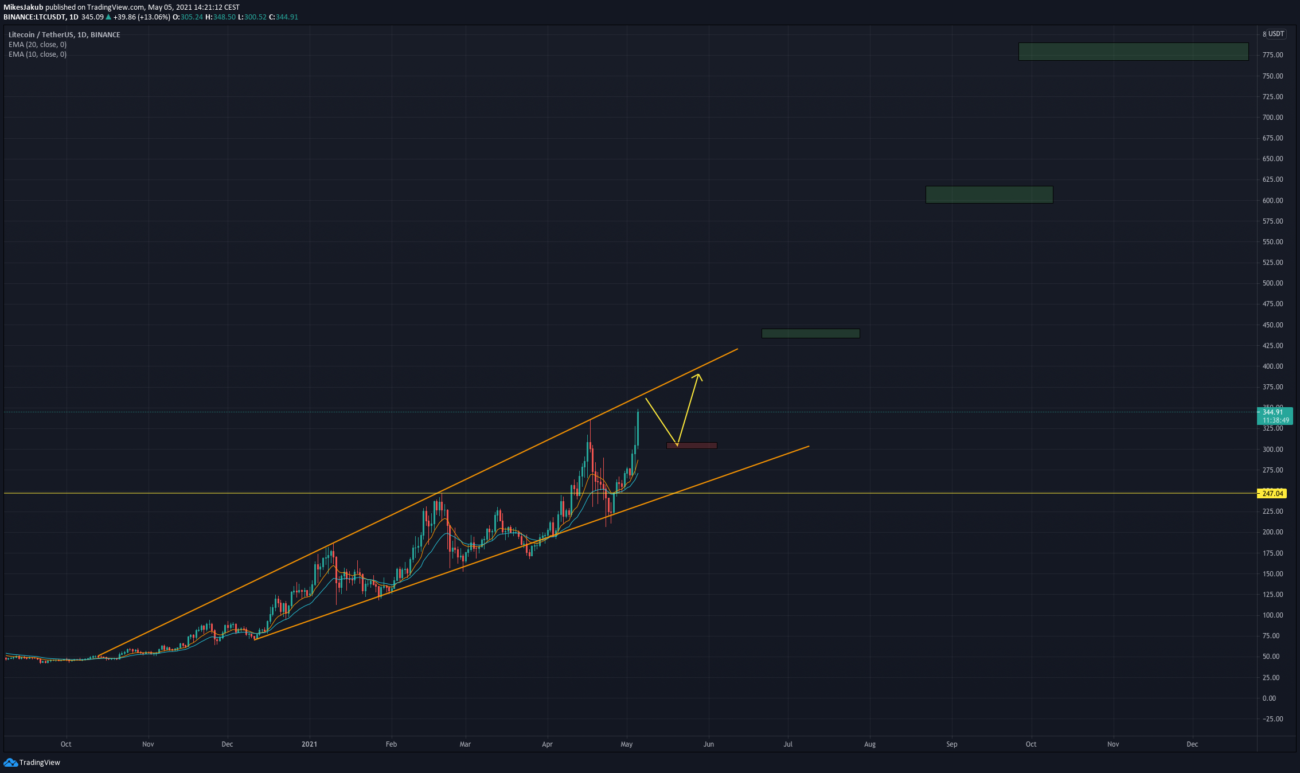 He draws several comparisons between the 2021 Bull Run and that of 2017.

In both cases, LTC/USD prices easily blasted above sell walls in unexpected rapidity.

From cyclical bottoms of 2019-2020, the LTC price has added over 12X in just over 415 days. Notably, LTC performed incredibly well versus BTC.

At spot rates, holding just 5 LTC equals around 0.1 BTC. However, in the “medium cap” altcoin season, LTC will likely outperform BTC in the coming few months, a prognosis that anchors his confidence.

If things pan out as expected, he maintains that the LTC is on the road to $700—or more than double from spot levels.

Although LTC/USD may pull back from the ascending channel’s visible resistance trend line, HODLing could turn out to be massively profitable.

Before LTC goes for bears’ jugular, swing traders can set their medium-term targets between $450 and $475. At least, this is the price target set by one Rocky88888888888 on Trading View. 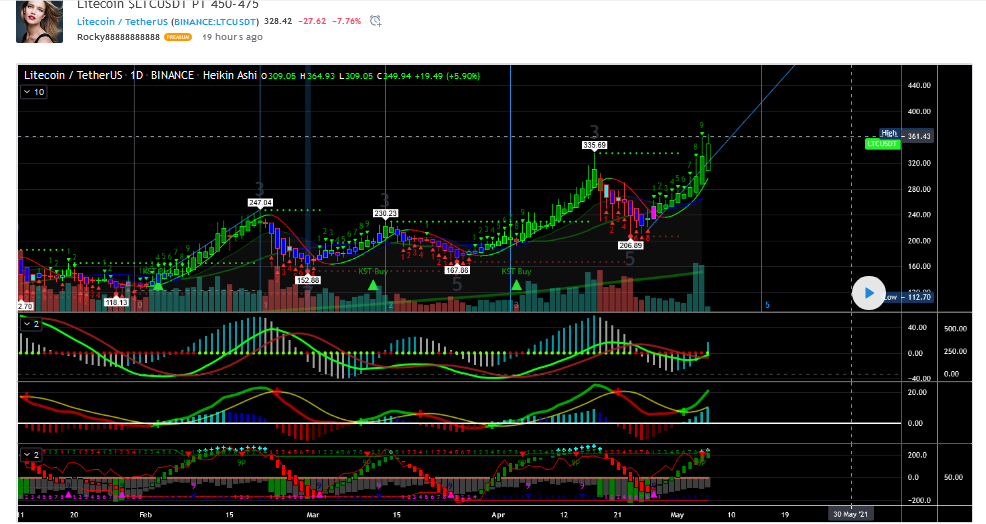 Based on price action on the daily chart, the technical analyst is convinced the next feasible target is $450.

Most of her indicators are bottoming up from the oversold territories suggesting a possible recovery and higher highs going forward.

If this is the case, and the LTC/USD price finds momentum from spot rates, bulls would take charge and thrust the coin comprehensively above April highs to new 2021 highs.

Once Litecoin buyers breach $340, another trader on Trading View predicts the LTC/USDT price to soar to $470 in the medium term.

The analyst, wilson1stop, clearly marks off April 2021 highs—identifying the level as a notable sell wall.

If buyers succeed, then odds of another lift-off towards $470 would be inevitable. His Take Profit is the 1.618 Fibonacci extension level of the March to April trade range.

Everything You Need to Know About Cryptocurrency Merged Mining

The Bitcoin Battle: There is a “Death Cross,” but BTC/USD Bulls Expect $87.5k

Is THETA a Good Investment?

Is Chiliz a Good Investment?

Solana Bulls Pumped, SOL/USDT Could Break Above $50 for a Leg Up to $60

Is BakerySwap (BAKE) a Good Investment?

Is NEO a Good Investment?