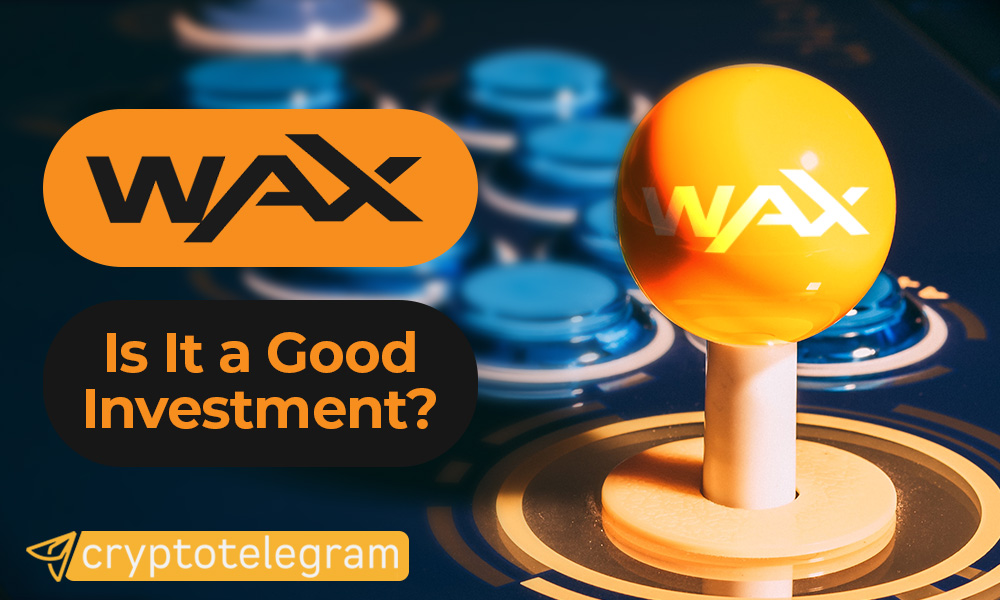 According to numerous crypto experts, WAX is a good investment and a very promising cryptocurrency that can soon become one of the leading projects in the blockchain ecosystem.

Not only is WAX a highly profitable and complex DeFi ecosystem, but it is also a very undervalued coin, which means that the WAX price can skyrocket at any moment.

But what exactly is the reason why so many analysts consider WAX a good investment to make in the current day?

WAX (WAXP) is a unique DeFi platform launched in 2017 with the intention of making processing and storing blockchain transactions more efficient and secure than ever before. WAX is a complex ecosystem consisting of multiple tokens which together build a powerful and profitable platform:

WAXP – WAXP is the main digital asset of WAX. WAXP is a good investment even for people who don’t plan to use other features and tokens of the WAX ecosystem.

WAXE – WAXP tokens can easily be converted into WAXE thanks to the WAXP-to-Ethereum bridge built into the WAX platform. WAXE is an ERC-20, which means that it can be staked on Ethereum-based DeFi platforms or traded on Ethereum DEXs (decentralized exchanges).

WAXG – WAXG is the governance token of the WAX platform. WAXG tokens are automatically distributed to all WAXP holders, and they can be used to vote on all important future developments of the WAX ecosystem.

Currently, WAX is being developed with a heavy focus on NFTs (Non-Fungible Tokens). The innovative architecture of the WAX ecosystem allows it to be a massively effective and easy-to-use environment for creating, collecting, and trading digital collectibles and virtual rarities.

Why Is WAX a Good Investment?

The unique multi-token design of the WAX platform is one of the main reasons why blockchain experts are convinced that WAX is a good investment. Thanks to the fact that WAX consists of many different token variations, it is compatible with a large number of blockchains.

WAXP, the main token of the WAX ecosystem, is based on EOS and fully compatible with it. Since it can be easily and immediately swapped for the ETH-based WAXE, the WAX platform is also compatible with Ethereum, and it can be considered as a bridge between these two different blockchains.

Another reason why WAX is a good investment according to many specialists is the fact that it’s one of the most profitable DeFi projects in the ecosystem. Since WAXP can be effortlessly swapped into WAXE and staked on the Ethereum-blockchain, it provides much higher flexibility and revenue potential than other EOS-based projects.

Finally, many crypto enthusiasts think that WAX is a good investment simply because it is still an undervalued, hidden gem. WAXP tokens can be purchased at an affordable price, and because of the strong technologic fundamentals of the project, the WAX coin price is expected to grow considerably in the near future.

WAX is considered a good investment due to the fact that many blockchain analysts expect it to become one of the most prominent and popular NFT-focused platforms in the crypto ecosystem. For example, the NFT expert Parachain Joey calls WAX “the Bitcoin of the NFT world”, and expects giants such as Microsoft and Marvel to adopt WAX on a mass scale.

NFTs are really starting to get noticed in the space. So my prediction is that $waxp will have the hugest upside. $waxp is the $btc in the NFT world. Heavy hitters like Microsoft and Marvel are using wax. 600k cloud wallet users. Bullish!!!

Many experts point to the fact that investing in NFT-oriented blockchains can be a much better option than simply collecting Non-Fungible Tokens. Kevin Lambert, a veteran of the gaming industry with 25+ years of experience, is convinced that WAX is a good investment because it’s one of the “strongest players in the NFT scene”.

NFT chains (not assets) have a good chance to go parabolic in the next few months. Strongest players in this scene are $WAXP (Topps, Capcom, Atari, etc…) and $FLOW (CryptoKitties, NBA TopShot, UFC)

A similar sentiment is shared by the popular Youtube channel Retail Underground. According to Retail Underground, WAX is a good investment and can soon become the best NFT-related cryptocurrency on the market. Retail Underground also predicts that the WAX price can reach $3 or more in the foreseeable future.

CryptoGlobal100 is another channel that posted an enthusiastic WAX price prediction. The channel claims that the recent WAX listing on Binance can give the coin a massive pump, and that the WAX price can soon surpass $1.

It’s not surprising that the long-term WAX price predictions are also very bullish. Coinskid, a well-respected crypto price forecast service, has published an analysis claiming that the WAX price might be growing at a rate of 124% per year in the upcoming years, which means that WAX can soon be worth almost $2.

What Can You Do With the WAX Coin?

The WAX coin (WAXP) can be used to purchase a variety of different NFT assets powered by the WAX blockchain. WAXP can also be swapped for the Ethereum-based WAXE token which can be staked on the ETH blockchain in order to generate passive income.

Can You Sell WAXP?

WAXP can be easily bought and sold on a variety of major exchanges, including Binance, Huobi Global, KuCoin, Bittrex, and many more. However, the WAX coin has not been listed on Coinbase yet.

Will WAXP Go Up?

Most analysts and experts predict that the WAX coin (WAXP) price will continue to appreciate in the foreseeable future. WAXP price predictions for 2021, 2022, 2023, and beyond are looking very bullish.

Is WAX a Good Investment?

According to numerous crypto enthusiasts, WAX is a good investment to make. The project is built on strong technologic fundamentals and taps into one of the most promising niches in the blockchain ecosystem, which is the NFT market.

WAX is one of the most promising projects on the market. Due to its unique multi-token design, it is highly flexible and compatible with various different blockchains such as EOS and Ethereum. Since it can be staked on the ETH blockchain, WAX is also highly profitable and can be used to generate passive income.

But the main reason why so many experts think that WAX is a good investment is the fact that it might soon become one of the most important NFT-related projects in the ecosystem. If that were to happen, the WAX price would certainly keep rising in the foreseeable future.

Is The Sandbox (SAND) a Good Investment?