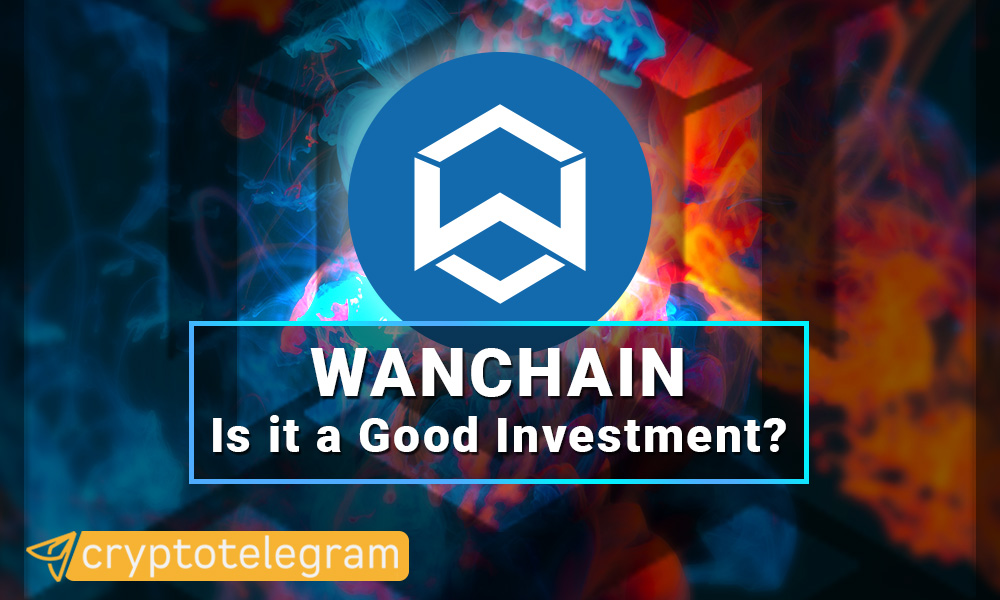 There is another blockchain that can host smart contracts built using Solidity. That blockchain is called Wanchain. If you thought only Ethereum has the ability to build and host smart contracts using Solidity then you were wrong. It turns out Wanchain is just as capable of doing that and much more. That is why we are looking at why investors could be looking to invest in this project. Also, it is worth knowing if it is a good investment.

Now, there are various functionalities that Wanchain has that can contribute significantly to improving its value in the market and therefore its price and ROI. The basic functionality is the ability to host DApps, create smart contracts, and mint non-fungible/fungible tokens. Additionally, the blockchain supports decentralized cross-chain, and ring signature-based private transactions.

Introducing Wanchain: The Blockchain Network for the Financial Industry

Wanchain has a target and that is the financial industry. It aims to displace the legacy banking systems worldwide from payments to investment, banking, etc, and introduce a blockchain-based solution. The blockchain is built with a cross-chain feature that is capable of facilitating the hosting of DApps and the transfer of assets.

So, what Wanchain is trying to do is to be the sustainable and decentralized alternative to traditional banking. How? By providing means of OTC funds transfers while eliminating the intermediaries in the forms of banks, exchanges, traditional payment platforms, etc. There are also other financial tools like investment tools, payment, and much more. It is aiming to be the complete package of financial instruments.

Talking of interoperability, Wanchain is arguably the first interoperable network. By prioritizing interoperability via the development of bridges that are entirely decentralized, Wanchain is hoping to boost the adoption of the blockchain solution. These bridges can link many of the isolated blockchains in the crypto sector. This is powered by the cross-chain architecture of the Wanchain, which allows developers to create decentralized apps with cross-chain abilities that could change the face of Defi in the future.

The protocol has been developing this cross-chain functionality since 2017, and early this year, the world’s first decentralized BTC-ETH direct bridge was released. The protocol has been able to build decentralized bridges linking blockchains like EOSIO, XRP Ledger, Ethereum, Wanchain, Bitcoin, and the Binance Smart Chain with other blockchains like Polkadot. Wanchain keeps building bridges that connect all the isolated blockchains from around the world.

What Is Unique About the Protocol?

In most cases, third parties are used for cross-chain transactions. However, with Wanchain that is different. It is unique in the way it is decentralized using threshold secret-sharing tech and multi-party computing to handle accounts independently. Wanchain boasts of three main cross-chain features. The first one is the registration module, followed by the cross-chain transaction data transmission module and the transaction status query module. These three features are employed from the start to the finish of a transaction connection.

Another unique aspect of the Wanchain is its Wanchain’s Storeman node system that uses the combination of atomic swaps, decentralized account management, secure multiparty computation, and threshold secret sharing to provide cross-chain solutions.

The key is to provide a means of free flow of assets across different chains without a centralized body handling the procedure. To achieve that, Wanchain uses its network of Storeman Nodes that combine to handle the transfer of data and assets across chains. The Storeman Nodes do not have direct control or custody over the transferred data and assets.

In the world of Wanchain, different blockchain assets can interact and connect easily inside Defi DApps built on the Wanchain. Once users are done using their assets on the Defi DApps, they can withdraw them back to their original chain or transfer them to another chain to be used in another DApp.

Additionally, the free flow of data will be done securely without any controlling centralized body. Thereby, enabling potent use cases for financial apps where events are interlinked from one chain to another. For instance, users can use their holdings on a particular blockchain as collateral for generating a loan of tokenized EUR on Ethereum. The whole procedure will be done and handled in the Wanchain network using the Storeman Nodes. 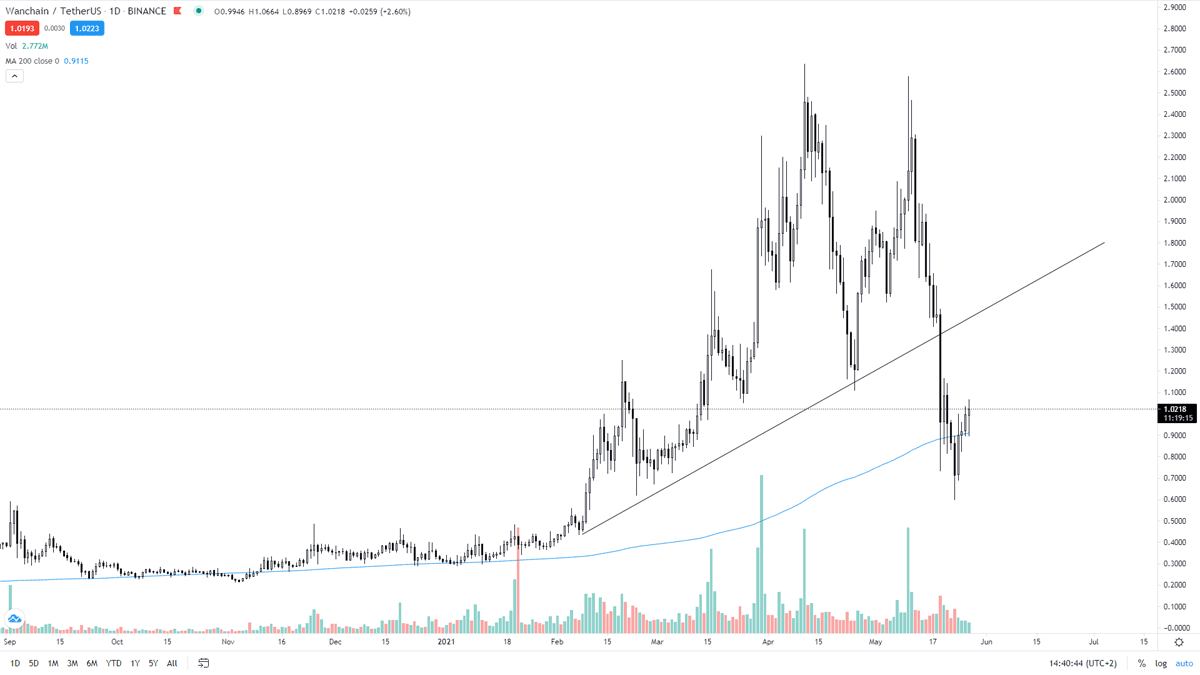 Initially, the token for Wanchain was an ERC-20 token called Wancoins before it changed to WAN after the protocol migrated to its blockchain in Jan. 2018. WAN functions include making payments and the governance process. The protocol mainnet was launched in Jan. 2018 and version 2.0 followed later in June before version 3.0 was released in Dec. 2018. Now the protocol is at version 5.0 as of May 21, 2021.

About 107.1 million tokens were sold during the ICO, and more than 120,000 worth of ETH was raised. The tokens sold are about 51% of the total supply and 60% of the funds raised went to development and research while another 10% was used for marketing, daily operations, community development, and infrastructure.

The token has a total supply of 210 Million tokens and a circulating supply of 169,028,581.17 WAN as of May 20, 2021. Another 10% of the token were dedicated to rewards and airdrops while 39% was allocated for the project’s founders. WAN has similar functions to GAS on the NEO blockchain, it is the fuel for tokenized transactions on the Wanchain blockchain and the security deposits for cross-chain transactions.

How Secure Is the Wanchain Network?

To secure its network, Wanchain utilizes the MPoS (Modified Proof of Stake) consensus algorithm. Three nodes carry out verification in order to maintain the whole blockchain. This splits the transaction fees that are paid to the protocol.

When you carry out cross-chain transactions, the vouchers, which are one of the three verification nodes, secure and hold the security deposits. In return, they provide proof of the original account and Wanchain account. For instance, when you deposit ETH, you get WAN at the current exchange rate, then the vouchers save the WAN and ETH blockchain addresses to store the transaction.

Wanchain Price Prediction: Is It a Good Investment?

Since Jack Lu founded Wanchain, the protocol has taken steady strides in the market reaching as high as $9 in 2018. Undeniably, this token has lots of potentials. However, can those potentials translate to good ROI for investors? Investors need to know that their investment in a certain token can bring forth fruits. There are many ways to know that and one of them is analyzing the price prediction of the token, the opinion of the crypto community, and the general market indicators.

Here are some Wanchain price predictions for you to feast your eyes on. Price predictions are one of the ways you can tell which direction a token is going to take in the market and you will do well to look at various predictions before deciding. According to Walletinvestor, Wan is a good long-term investment that has the potential to give you a +98.51% earning in a year. The site is predicting the WAN token to reach $2.116 in a year. By 2026, the WAN token could be worth $4.7 that is +344.84% earning potential for five years.

Another prediction website Tradingbeasts also holds that the token will increase in value reaching as high as $1.3 by December this year. The token is expected to continue rising and by December 2024; it could reach as high as $2.3. Digitalcoin is predicting the WAN token to hit $1.95 in a year to give you nearly double the amount at which it is being sold presently. After five years, the token could be worth $4.13. All these prediction points at a steady climb up the ladder for the WAN token.

How is the token faring among the crypto community? Let’s check what the crypto Twitter community has to say about the WAN token. Twitter user MegaWhale believes the WAN token will break its resistance and head towards $2.54 in the short term.

I think we will break upward out the wedge and head to $2.54 (short term) – although the market can change so it’s hard to be sure, I prefer to analyse and asses as the price changes to get more accurate predictions (:

But yes 10x is definitely possible

Another Twitter user The Wasper held a prediction poll for the WAN token in which most partakers believe the most likely price for WAN is between $1 and $5. It looks like users also hold the opinion that WAN will increase steadily in the market. This can be taken as a good show of confidence in the WAN token.

Another YouTuber the Crypto Kingdom also believes that the WAN token could retest its ATH by the end of the year or later. He believes the token could go higher as NFTs become more popular in the future. You can watch his full video here:

This is very likely to happen given that the WAN token reached $2.2 back in April. Also, going by the various predictions that we have seen so far. Several predictions are pointing at the possibility of the token reaching $2 this year. This is a positive sign for the token on its quest up the market. The more aware users become of the Wanchain, the higher the rate of adoption, which could boost its market price faster than initially predicted.

No, it won’t reach $5 anytime soon. Going by the current market conditions with the bears dominant in the market presently, that is unlikely to happen. According to several predictions we have examined, $5 is not a realistic target for the WAN token.

Can WAN Token Crash in the Future?

The team behind the project has done well by following their roadmap and securing key partnerships that are likely to ensure the protocol’s future is secured. This should put the idea of the protocol crashing to bed.

WAN: Is It a Scam Token?

No, there is nothing to suggest that Wanchain is a scam. It is a well-established blockchain that has been able to offer real value to its users. Recently it was able to help XRP cross into the DeFi world with its cross-chain bridges.

How to Get the WAN Token?

You can get WAN on several popular exchanges like Huobi, Binance, Bitrue, KuCoin, etc. There are several trading pairs to go with the WAN token such as XRP, BTC, ETH, among others. Also, there is the WAN wallet that the dev team is working on making it more like other wallets so you can store and manage other cryptos.

Is Wanchain a Good Investment? – Conclusion

For a blockchain that has the goal of decentralizing the financial sector via cross-chain solutions. So far, the Wanchain has been able to provide the right environment for DApps developers to create various blockchain solutions such as lending and borrowing, financing and investing; exchanges and even yield farming services on its platform. The Wanchain team has been able to show that they can make the project work as it looks to incorporate legacy banking systems. Also, the team is working relentlessly to draw developers and businesses to its flourishing DApps community.

There are many investors’ confidence boosters that can be found in and around the project. The project still has many potentials to deliver upon and if it can successfully deliver on most of them, then the project can boom in the market. However, right now it is a steady rise for the Wanchain protocol.

Is NEO a Good Investment?

Is Enjin a Good Investment?