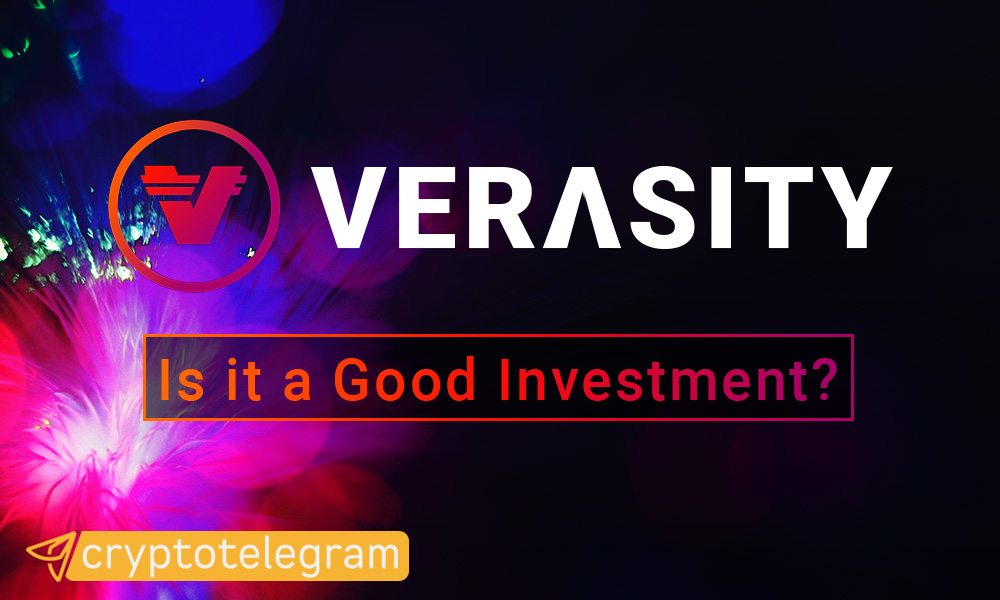 When the price of Bitcoin and other most popular cryptocurrencies falls down, investors start to look for undervalued gems with smaller market capitalization. Verasity might not be as popular as Bitcoin or Ethereum yet, but its price has been performing superbly over the past few months. But what is Verasity really, and does it truly have the potential to become one of the largest altcoins on the market?

Verasity (VRA) is an innovative blockchain protocol and product layer platform designed to fulfill the needs of the video entertainment industry in general, and esports specifically. The main goal of Verasity is increasing the revenue of content creators and video publishers while also allowing their viewers to earn cryptocurrency simply by watching videos online.

The most unique aspect of Verasity is its utilization of the patented Proof of View protocol (PoV) blockchain layer protocol. The core idea of PoV is simple: VRA tokens are minted each time when a viewer watches a video.

To make sure that the system is not abused, Verasity includes many sophisticated mechanisms which guarantee that only organic views will be rewarded: playing videos on loop or having multiple videos opened in different tabs will not generate VRA tokens.

In order to create an ecosystem beneficial for all parties involved, both content creators and their viewers are rewarded. The VRA tokens earned by producing or watching videos can be converted to other cryptocurrencies such as BTC or ETH, or used to pay for goods or services directly on the websites of Verasity’s partners.

Currently, the Verasity ecosystem includes Esportsfightclub.com, focused exclusively on esports, and Verasity.tv, which is a general platform for all types of videos. But using these websites is not necessary to earn Verasity tokens – thanks to the integrated Verasity SDK, videos on popular platforms such as Youtube, Twitch, and Vimeo can also generate VRA.

Although Verasity is a project that has been in development since 2019, for a long time the VRA price remained at a very low level below $0.001. It wasn’t until February 2021 when the VRA price finally started erupting.

Verasity was steadily accumulating a growing user base over the years, so it was just a matter of time until the VRA valuation began to appreciate. Currently, the Verasity esports platform has almost 10 million users.

According to estimates, the global esports viewership has already surpassed 0.5 billion yearly viewers, and the entire gaming market is worth over $120 Billion. It’s obvious that esports is still largely an untapped market for blockchain-based platforms, so Verasity still has a lot of room for growth.

When analyzing if Verasity is a good investment, it’s also important to note that the VRA token is still only available on exchanges such as OKEx, KuCoin and HitBTC. Verasity is not yet listed on Binance and Coinbase, and when that finally happens, the VRA price will very likely skyrocket.

According to the Crypto Community, Verasity Is a Very Good Investment

The crypto community is unanimous: Veracity is not only a good investment, it’s actually one of the most undervalued gems and might massively increase in price very soon. But although the general outlook for Verasity is very bullish, the precise VRA price forecasts vary a lot.

According to a poll made by the Twitter profile Crypto Polls and News, most of the respondents are convinced that the Veracity token price will surpass $1 by the end of the year. Only a very small number of people think that VRA won’t reach more than $0.10.

What do you think will be the peak price of $VRA during this bull run?

In another survey, created by the user Cryptoist, the responses were even more bullish. Most of the people who took part in the poll are certain that the VRA price will surpass $1 in 2021, and over 30% of the surveyed believe that Veracity will even trade for more than $2.

what’s your price prediction for $vra one year from today

However, some members of the Twitter crypto community are even more optimistic. The user going by the name Jean-Pierre believes that the VRA price will reach $3.25 by the end of the year, and that Veracity will be worth around $1.75 in the first half of 2021.

Realistic price prediction for $VRA is ~$1.75 by July 4th. You heard it here first. Get ready for 🎇🎆. This #alt is getting sent.

Not only the Twitter crypto community but analysts and experts as well are very bullish about the incredible potential of Verasity. When it comes to specific numbers, most analysts seem to be convinced that $1 is a realistic goal for the VRA price to reach by the end of the year.

Technical analyst FlameseN Crypto is one of the Youtube experts who share the $1 VRA price prediction. According to him, chart analysis clearly shows that the Verasity price is about to erupt, as the project is greatly undervalued at the moment given its solid technical fundamentals and huge market potential.

Another channel that shares the $1 Verasity price forecast is Unreal Investments. The channel cites multiple real-life use cases of the VRA token as the number one reason why the Verasity token is likely to massively appreciate in value in the near future.

Youtube analyst going by the name Moon Boy is yet another researcher who gives $1 as his VRA price prediction. His main reason for that is the fact that Verasity is still listed only on a very small number of exchanges – when it starts being offered on Binance or Coinbase, the VRA price can rapidly increase.

Most analysts and experts agree that the VRA token price will almost certainly surpass the $1 price level by the end of 2021. Some members of the crypto community are even convinced that Verasity will trade for $2, $3, or more before the year ends.

Where Can I Buy Verasity?

Verasity tokens can be purchased directly on the project’s official website. VRA tokens are also available on some centralized exchanges such as KuCoin, OKEx, and Bittrex, as well as on the decentralized exchange Uniswap. Verasity is currently not listed on Binance or Coinbase.

Is Verasity a Good Investment?

All things considered, Verasity seems to be not only a good investment but also one of the most undervalued cryptocurrency tokens on the market. Since esports is such a big global industry, and Verasity is the only project with patented technology combining esports and blockchain, the VRA price will almost certainly grow, and the $1 VRA price prediction for 2021 looks very realistic.

Is WIN a Good Investment?

Is FLOW a Good Investment?