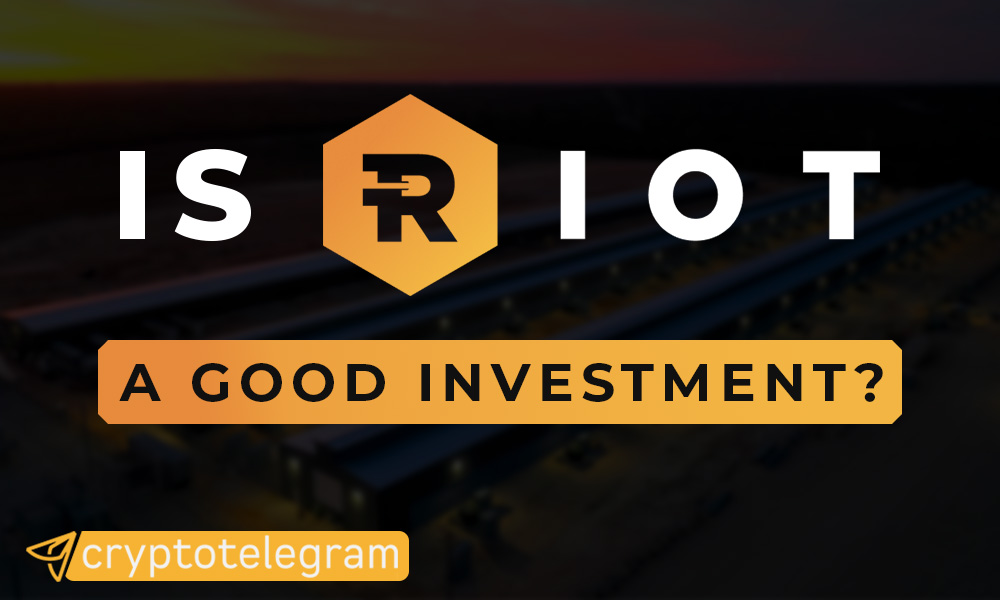 As the crypto sector gradually grows bigger, analysts expect RIOT to be an outstanding stock for the foreseeable future. Companies like MicroStrategy and Tesla may take all the headlines on crypto investments, but other industry leaders like Riot Blockchain have a fundamental role as well. Let’s explore whether RIOT is still a good investment.

What is Riot Blockchain?

Many crypto enthusiasts got to know of this company in 2017. However, this was not the date this company actually launched.

What was Riot Before? Well, 2017 was only a realignment of business. That was when Riot Blockchain changed its name to fit its new business focus. From 2003 till then, this company was called Biotpix, focusing on medical and veterinary drugs. However, Biotpix did not find much success competing against pharmaceutical powerhouses. When blockchain finance began to take off, the management team decided to pivot and explore the new opportunity.

Therefore, to answer how long Riot Blockchain has been around, one probably ought to focus on the years of actual blockchain involvement. After all, this company has attained more success in the past four years than it ever did during its previous business model.

Investors took this new approach in stride. In the subsequent weeks, RIOT stock had appreciated from less than $10 to over $30. Riot Blockchain explored several aspects of crypto trading and investments for the next three years. It was not until 2020 that the company decided to go big on Bitcoin mining. Incidentally, Bitcoin and the crypto markets were on the cusp of a massive rally, eventually quadrupling in price by early 2021.

What does Riot Blockchain do?

Its investments in Bitcoin mining have drawn the attention of crypto investors. Riot Blockchain is one of the largest crypto miners whose stock is listed and its operations regulated. With the exit of Chinese miners after the mining ban in June 2021, institutional miners like Riot Blockchain continued to expand aggressively to fill the void that these miners had left.

Riot Blockchain’s expansion has been at a historic clip. By mid-2021, this company had total outstanding purchase orders of over 58,500 miners. Each ASIC rig costs a few thousand dollars, meaning that Riot Blockchain spent tens of billions of dollars on equipment alone in the past few months. Nonetheless, this is a viable investment given the exponential Bitcoin prices in 2021.
Riot Blockchain currently holds close to 4,000 Bitcoin, worth over 200 million dollars. This company, therefore, is fast becoming one of the largest Bitcoin holders in the world. Recently, Riot Blockchain expanded its facilities into Texas, a state gaining credence with miners due to its cheap electricity and deregulated grid. In the past year alone, the company has mined almost 3,000 BTC, a capacity set to grow as more ASIC miners come to life.

Riot blockchain is not relenting in its expansion drive. The company is looking to add to its mining arsenal continually and will have more than 90,000 rigs by the end of 2022. That number is awe-inspiring and should increase hash rate capacity to over 8.6 EH/s. The company is seeking to optimize its power sourcing to ensure that electricity sourcing is as cheap and as sustainable as possible.

Not everyone is comfortable with the volatility of cryptocurrencies. The highly speculative nature of cryptocurrencies is a draw for many traders but keeps other investments at bay. For those researching how to invest in the blockchain without buying Bitcoin, Riot Blockchain offers the perfect alternative.

RIOT offers an indirect channel of gaining exposure to Bitcoin. Their stock is now mostly dependent on the fortunes of their Bitcoin mining operation. When a person purchases this stock, they don’t own the asset or worry about mining logistics. You only get exposure to this market and benefit from upsides, just like those who own crypto.

Investors seeking exposure to Bitcoin mining can long Riot Blockchain stocks in anticipation of future rises. There are other ways for those seeking to know how to invest in Riot Blockchain. Such is the beauty of a stock listed on a popular index like NASDAQ, on which RIOT is available.

Accordingly, RIOT is like a derivative product for people seeking to manage risk while indirectly getting valuable exposure to crypto in a regulated environment.

How to Invest In Riot Blockchain

Investing in Riot Blockchain stock is pretty straightforward for those with a rudimentary understanding of financial markets. Today, stock brokerage platforms avail these opportunities to your smartphone, making market analysis more precise and more exciting than ever before. RIOT enjoys relatively strong liquidity and stability, useful for more conservative investors.

Some will find reasons not to invest in Riot Blockchain. This attitude is more solidified in decentralization adherents who believe that too much delegation relinquishes their control. Therefore, for such persons, holding or mining Bitcoin is preferable. However, these activities are not a logistical bed of roses, and one must always be ready to take the full reins. Mining Bitcoin requires a stable supply of cheap electricity and the requisite equipment.

RIOT at specific times in the past year grew faster than most cryptocurrencies. Nonetheless, the essence of this stock is a mainstream company that can provide exposure to Bitcoin without all of the immediate risk.

Riot Blockchain is currently primarily focused on Bitcoin mining. The company has previously considered other investments. As crypto continues to grow bigger, the Securities and Exchange Commission (SEC) will undoubtedly cast an ever-more watchful eye on this industry. It will be fascinating to know how Riot Blockchain will fare with any new regulatory developments. 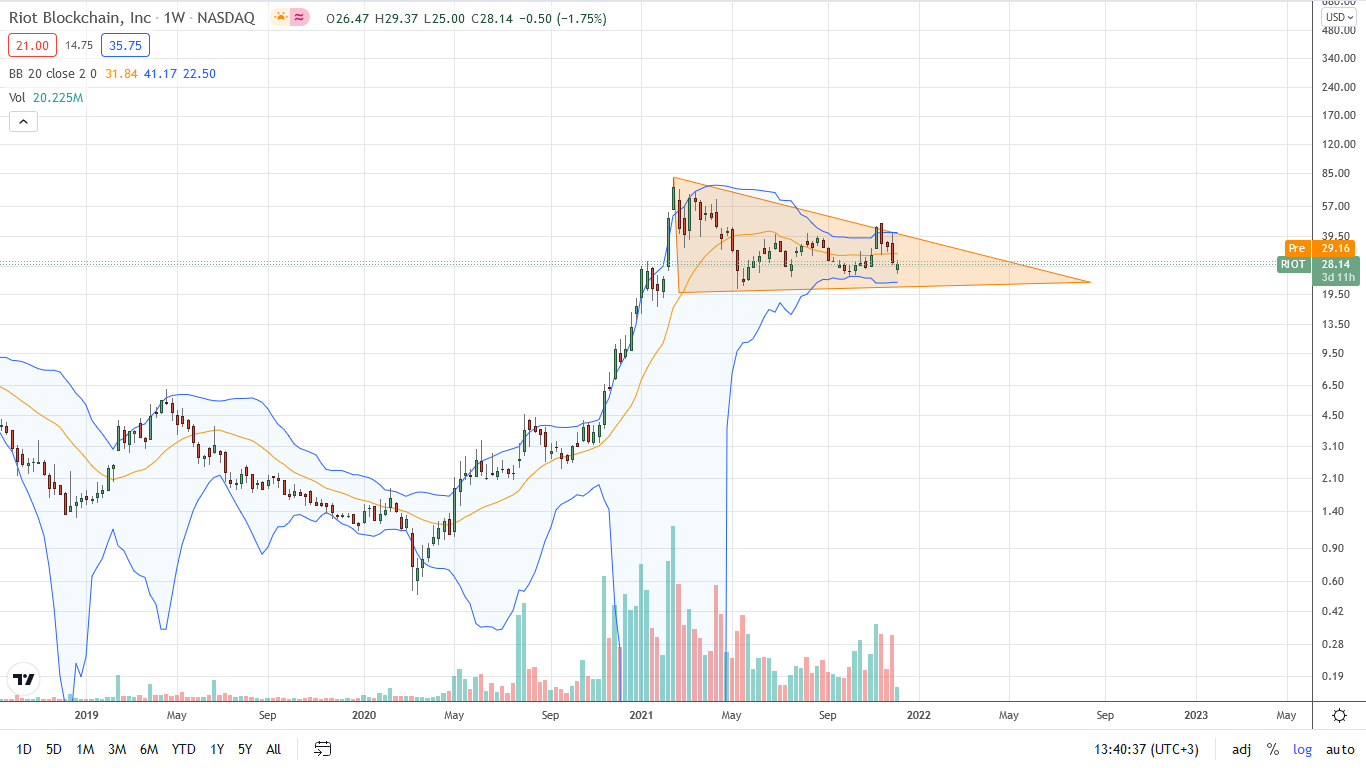 At press time, RIOT stock is just below $30 inside a pennant. This mark is relatively modest given the company’s potential and existing asset base. Nonetheless, it would be unreasonable to expect rapid upswings because this company has a longer-term approach.

2021 has been decent in terms of revenue. At a time when the company had high overhead costs, this appreciation is impressive. Bitcoin may hit occasional blips, but its general trajectory is to break all-time highs when everyone thinks it is done.

Therefore, RIOT is poised to benefit from revenue from its miners and any subsequent rally in Bitcoin prices. Stock prices could begin to go toward the $40 mark early next year, depending on Riot blockchain earnings. Still, making a definitive Riot Blockchain price prediction is tricky, given the nature of this market.

Naturally, one should be wary of a company’s growth forecasts. This skepticism comes with the territory in crypto circles. However, Riot Blockchain appears to be backing its talk with investment commitment and willingness to play by the rules of regulated markets.

Is Riot Blockchain a Good Buy?

Riot Blockchain is one of the most important companies in the blockchain space. This company provides a direct channel for institutional scale capital to pour into Bitcoin mining. Like every facet of crypto, there is a significant amount of risk in betting on this stock considering the volatile nature of the market. Nonetheless, investing in RIOT still offers a semblance of stability relative to holding actual cryptocurrency units.

Riot Blockchain has witnessed tremendous expansion in its Bitcoin mining operation. This company’s story is the story of millions who found a different purpose with the emergence of cryptocurrency and the blockchain. Presently, RIOT stock may not reflect the potential of this output yet, but the results in the next few months should speak volumes. Therefore, for those looking to invest in RIOT, it will be fascinating to watch how high Riot blockchain stock can go.

Is HUT 8 Stock a Good Investment?