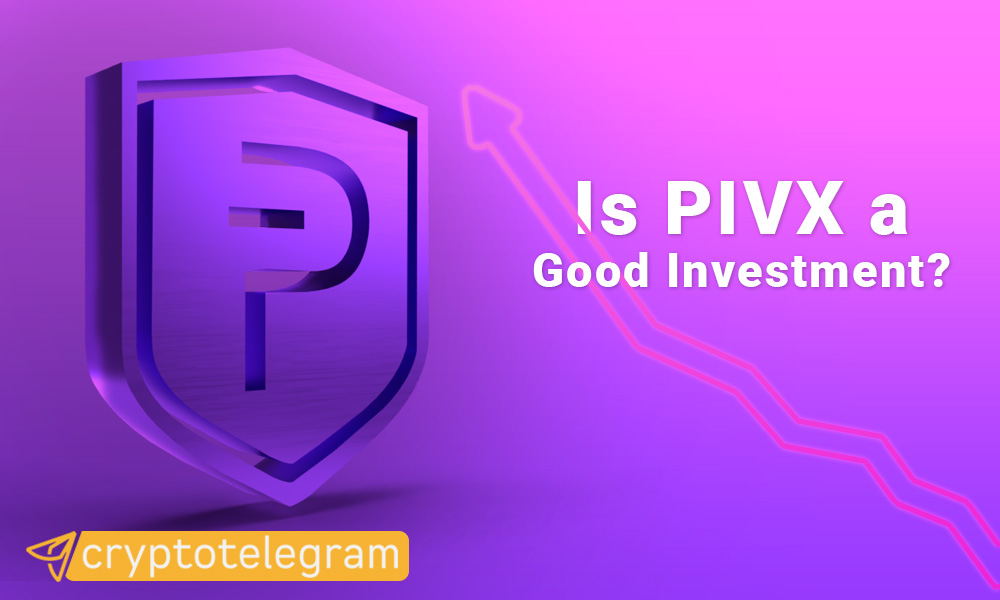 PIVX stands for Private Instant Verified Transactions (X for Transaction).  It is a Project which talks about freedom, decentralization, and privacy. The goal of the platform is to develop decentralized open-source privacy-focused cryptocurrency with an instant transaction timeframe. This was made possible through the hard work and dedication of developers of the currency.

Although the transaction speed is not the best, however, it is one of the quickest we have seen amongst all other cryptocurrencies.

In this article, we will look into whether PIVX is going to be a good investment in the year and beyond. Understanding when to invest and whether a coin will be a profitable investment is very crucial in the cryptocurrency industry. The aim of this is to give you a general view of the cryptocurrency and guide you towards any investment decision. Let’s get started.

What is PIVX Cryptocurrency?

The project was designed and tested using advanced cryptography protocols to provide better user financial Data protection. We can say that PIVX entails financial Data Protection. The project is majorly a cryptocurrency but is also linked with various other projects. The project aims to create a globally accepted decentralized online digital currency based on the PIVX manifesto’s objectives, which is “Privacy is non-negotiable.”

The PIVX, a DAO, uses a decentralized network of masternodes that permit users to run various apps and services, treasury management, and community governance. The platform has a built-in governance mechanism that grants masternode owners access to vote for or against any submitted proposal.

PIV is the governance token of PIVX platform and uses a proof of Stake (PoS) mechanism, and it is built on top of the Zerocoin protocol. The token is used to earn rewards for contributing to the PIVX network. Users can earn rewards through masternodes and staking.

One of the things that makes the project different is that it is a DAO that is self-funded and community-driven. Also, the project has the capacity to endlessly self-fund development and other PIVX network supporting activities through monthly treasury payouts, which are focused on successfully voted community proposals.

Furthermore, PIVX burns 100% of all transactions. For users who wish to participate on the network, the platform uses a tier two-layer to its network, deploying masternodes to help users participate in the governance. Users only require 10,000 PIVs to run a masternode, while users can stake 1 PIV for user data protection. It is an excellent project with a nice vision of protecting people’s data, which is something that has drawn worldwide criticism for years.

The Beginning of PIVX

Every project has a beginning. PIVX is a privacy-centric PoS cryptocurrency forked from Dash. If you are acquainted with Dash, you will know that it is also a fork of Bitcoin, which wants to be faster and more privacy orientated. PIVX was announced on bitcointalk.org in November 2015. From the rumors, it was said that a small group of Dash developers fell out of love with the direction the cryptocurrency was heading into and decided to develop their own crypto. It was previously called Darknet before rebranding to PIVX.

The group comprises three individuals (Coin Server, s3v3nh4cks, and Stakebox). But during that period, James Burden (AKA s3v3nh4cks) became the founder and one of the project’s leading developers. Burden has over 20 years of experience in working as a hardware engineer and has been actively involved in cryptocurrency since 2012. He left the project in April 2019 after announcing that he will leave a year prior to his leaving.

That being said, none of the initial founders of the project has been active since 2018. The development since 2018 has been headed by three core blockchain developers, namely; Fuzzbawls, Furzy, and Random Zebra. They have over 20 years of experience in blockchain development. With their combined effort, PIVX has become one of the most actively developed blockchain projects, breaking into the top ten, according to Cryptomiso and Messari. The community members have been overseeing the rest of the PIVX ecosystem, such as marketing, web development, business development, and social media. Most of these members have been fully active in the platform since it was launched.

How Does PIVX Work?

First of all, let’s look at the common features of the PIVX cryptocurrency.

PIVX platform operations do not differ much from DASH. The crypto uses a masternode for a couple of operations. The masternode plays a significant role in the approval and validation of transactions besides securing private details. The masternode also gives users voting right. However, the platform said that users would have permission to decide on proposals in the future. The QT wallet is setting up the masternode, and they are also responsible for the valuable contributions to the network, which results in rewards for mining participation.

There is also another alternative way of contributing to the PIVX wallet. That is, a user can use the PoS 3.0 embedded in the wallet for verification of blocks, and users will be rewarded with minted coins. It isn’t easy to control because more than half of the network is enhanced by each participating node. This makes the network highly secure and difficult to attack.

On the issue of transaction fees, the website revealed that its network fees are 40x lower than Bitcoin. While they stated a transaction speed of 70 transactions per second, Doreain said that TPS could go as high as 1000 using the SwiftxX payment protocol.

The mining of the cryptocurrency is done at pivx.cryptopool.io. It is a place where users have the options on the configurations for mining in the PIVX mining pool.

On the issue of mining the cryptocurrency, PIVX uses a proof of stake consensus mechanism, which is made up of Masternodes and validators.

The work of the masternode is to vote on development proposals brought before the community and validate a transaction on the blockchain with a minimum of single confirmation, which can happen off-chain through the SwiftX payment protocol. For users to run a masternode, they will need to stake 10,000 PIVX, and each masternode gets 1 vote, and it is not fully involved in the mining of PIVX tokens.

The mining for PIVX is solely the validators’ job, which has the opportunity to generate a block proportional to the amount of PIVX they have staked. It needs approximately 500 PIVX to generate a single block in 1 month time period.

The PIVX was launched on 30th January 2016 as Darknet. There was no Initial Coin Offering (ICO) for the project. Instead, 60,000 PIVX were pre-mined to permit for 6 masternodes to operate the initial network.

However, as the months went by and the PIVX community started to grow to a bigger size and become self-sustaining, those 60,000 coins were burned.

The PIVX’s supply increases by approximately 2.6 million every year. It started the year with more than 60 million in circulating supply and has been projected to reach 312 million after 100 years from launch. The PIVX average block mining time is 1 minute, making it a lot faster than both BTC and DASH.

Where Can I Buy PIVX Cryptocurrency?

Several cryptocurrency exchanges are trading the PIVX token. The PIVX coin is listed for trading on various trading exchanges globally and is paired with major cryptos such as BTC, ETH, BNB, KRW, and USDT. This allows users of the platform to access or obtain the PIVX token using their crypto holdings, thus, bypassing the lengthy process in KYC.

The top exchanges trading PIVX are Binance, Bithumb, Kucoin, Folgory, and Bittrex. There is still more online that you can check out.

To get the PIVX tokens, you need to sign up to the Binance cryptocurrency platform or any other exchange, locate trading and purchase any cryptocurrency that is paired with PIVX. Then, trade the token for PIVX, such as BTC/PIVX. However, you might need to set up some security authentication measures like Know Your Customers (KYC), etc.  But if you already have an account with an exchange, you only login and purchase the paired crypto and trade it for the PIVX coin.

Should I Buy PIVX Now?

Whether it is safe to invest in this cryptocurrency will depend on a lot of factors such as its benefits and future price forecasts. The project comes with increased privacy with zPOS. It is also decentralized, which is another turning point that will drive investors to the platform because they know that their identity is secured. The platform rewards users who are staking on the PIVX network via transaction fees. And the most unique is its high transaction speed, low transaction costs, and high level of scalability.

But the question is, “Can these benefits lead to more investment in the platform and increase the value of the token? Well, let’s not forget that it is not entirely private or anonymous due to the IPs not being anonymous, meaning that the user’s identity may not be entirely protected. Also, it could face stiff competition from the likes of other top privacy-centric cryptocurrencies like Monero.

However, putting all these into consideration, we believe that PIVX can still be a profitable investment option and very safe to invest both now and in the long term. The tokens price broke into the $1 projection in February this year. Users attributed such to the bullish run in the cryptocurrency space. However, if you invest now, your investment will likely increase in the future. The ongoing surge in the value of cryptocurrencies could play a massive role in the token’s future value.

Another reason the PIVX token value could rise in the year is that it provides 100% anonymity which is what the majority of people need to make private transactions and which has been a major hindrance of other cryptocurrencies.

In other to further prove our point, we look into the future price forecast of PIVX from crypto price prediction platforms.

According to Tradingbeasts, PIVX will trade at an average price of $2.13 by the end of the year. The platform used their in-house algorithm in their forecast. Their prediction is bullish for the long and short term.

Another platform, Digitalcoinprice, projects that the PIVX price will reach $2.39 before the end of the year. They are also bullish like Tradingbeasts. In 5 years, it would exceed $6, according to the website data.

Also, Coinarbitragebot estimates that the tokens price could trade at $2.54 by the end of the year and could exceed $15 in three years.

These PIVX price predictions show that it is safe to invest in the PIVX coin now. 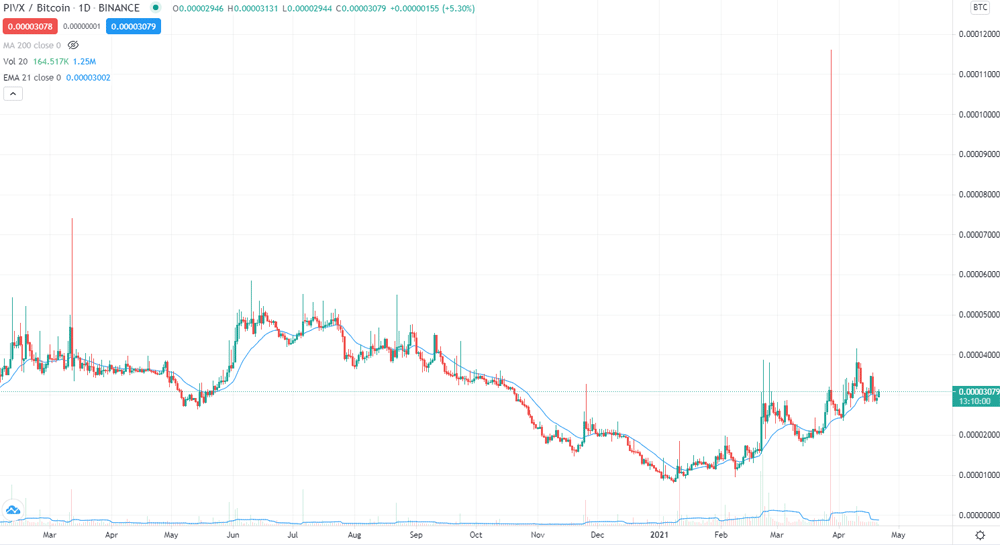 Conclusion – Is PIVX a Good Investment?

PIVX cryptocurrency is a good privacy coin aiming to be an easy-to-use digital cash replacement. Although there have been some barriers surrounding the implementation of the privacy technology, the community has been proactive, engaged, and optimistic about the project. The project is doing great in the market with high trading volume and support from various cryptocurrency exchanges and looks likely to have a bright future.

It is worthy to note that the privacy from the Zerocoin implementation, faster and cheap transaction fees (made possible with SwiftX), and staking (return on investment ROI) all sum up the coin’s ongoing popularity. The project’s goal makes it worthy of investing in. That is because it seeks to solve one of the major challenges that users face online, which is user data privacy protection.

Although there are still other crypto projects with similar goals, the PIVX ecosystem comes up with some unique values with an advanced PoS algorithm and the decentralized community-guided governance model. The structure and the organization of the project show that they are moving in the right direction.

In summary, the PIVX token is worthy of both short – and long-term investment. The values are capable of surging in the future. But in your personal opinion, what do you think about the token. Let us know below.

Bitcoin Price Uptrend is Valid, Will BTC/USD Rebound Back to $60k