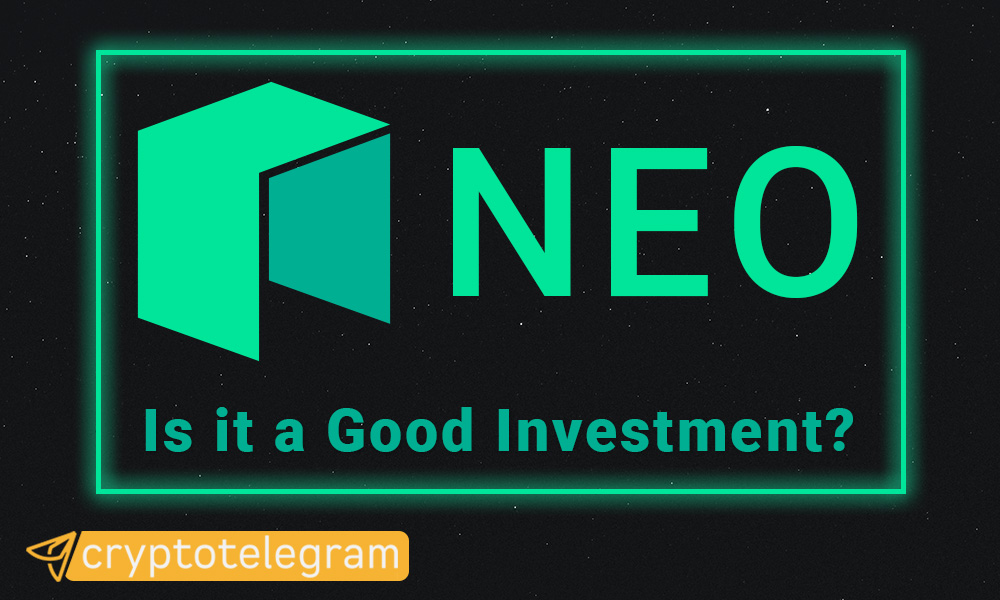 There is Ethereum and there is NEO, which many have dubbed China’s answer to Vitalik’s project. The NEO protocol outlines a lot of exciting ideas, innovations, and technicality. Just like Ethereum, the protocol can be used to host decentralized apps, smart contracts, and much more. All these features have put the NEO project at the forefront of investors’ thoughts especially in Asia. The NEO protocol has a strong community backing that is focused on making the project a viable alternative to Ethereum and other similar blockchain networks.

As such, can we say NEO is a good investment? The potentials that NEO protocol holds could be a good reason for investors to wanna take a dunk. However, careful examination is needed to be sure which direction the token is going to take. This will have a considerable effect on investors’ portfolios should they include the token.

Explaining NEO – How Good Of an Investment Can It Be?

Let’s break down the NEO protocol. The protocol started as Antshares and it was co-founded by Erik Zhan and Da Hongfei in 2014. The name changed to NEO during the ICO craze of 2017. As you know, NEO is a blockchain network with its native coin and it supports the creation of smart contracts and digital assets. The goal of the protocol is to bring automation to the management of digital assets via smart contracts. The end goal is to create a smart economy based on the decentralized nature of the blockchain.

The native token is called NEO and the token holders can earn on their holdings. The earnings is another token called GAS, which is the utility token that is used to:

NEO employs the dual token system, which differentiates the network usage from the governance process, as such providing a way of paying transaction fees while buying tokens. This way, token holders can participate in the NEO network without diminishing their stake. The GAS token also performs the function of operating and storing tokens and smart contracts to preserve node resources.

A Look Back Into Its History

It was also meant to change the face of migration and interoperability between private and public blockchain and bring it to the next level. This is meant to propel AntShares to the forefront of the market and make it stand out.

It was in 2017 that the project metamorphosed into NEO to give it a new image. However, the roadmap for the project remains clear.

The protocol also remains one of the few blockchain projects to enjoy support from the skeptical Chinese government as well as other businesses in China. The evolution of the protocol has earned its support from even companies like Microsoft China.

Why Is NEO Different?

There are several problems in the crypto market that NEO is aiming to tackle. The protocol wants to be the flexible option to the Ethereum network. So, it embraces a principle that assesses designs based on multivariate spectrum, which allows the protocol to realign its market strategy appropriately.

To break that down, it means that the developers on NEO can judge the level of centralization or decentralization that is suitable for each project based on each use case. At the same time, they decide on other key areas like the off-chain and on-chain governance processes. As such, NEO has more use case possibilities for wide-range adoption in both public and private industries.

NEO Token- Is It Worth It?

The total supply of NEO is 100 million and it was issued in two sections. The first section involved 50 million tokens that were shared among NEO backers accordingly during the crowdfunding event. The other 50 million tokens will be allocated to the NEO council and it is meant to take care of long-term maintenance, development, and operation of the NEO protocol.  The other token, GAS, in the NEO ecosystem has already been mentioned earlier in the article.

GAS is charged for transactions on the NEO network and it is generated with every newly mined block. GAS started at zero supply and it is expected to reach its total capacity of 100 million in 22 years given the rate at which new blocks are generated. Each year, about 2 million blocks are created and at the start, the GAS generation is 8 GAS for each block. This will be reduced every year by 1 GAS after 2 million blocks. This will continue until we reach 1 GAS for each block from the initial 8 GAS per block. It will stay like this for around 22 years. By the time we will reach 44 million blocks then GAS generation will be at the maximum of 100 million. At this point, there won’t be any new GAS generation from new blocks.

So, that means that in the first year of launch, 16% of the GAS total supply was generated and 52% followed over the first four years. In the first 12 years, about 80% will have been generated. GAS tokens that are generated are shared accordingly based on the NEO retention ratio of the holders.

NEO Price Prediction- Is It a Valuable Investment? 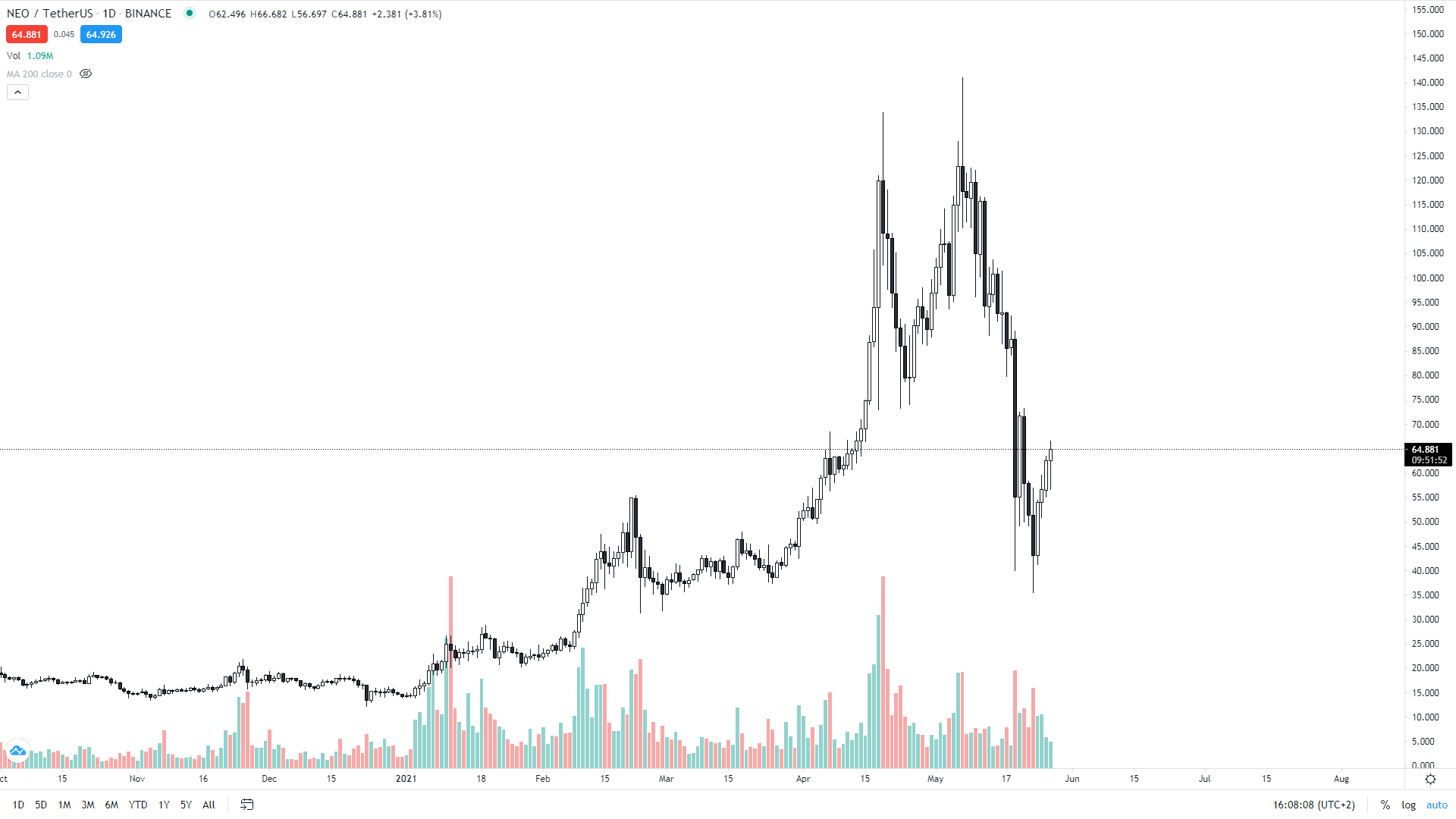 The rise of the Chinese Ethereum has been quite a journey since it was launched. For a token that started at around less than a dollar to today’s value of $90 as of May 17, 2021. That is a remarkable return for those that were patient enough. Mind you, the token had reached an all-time high of $187.4 as of January 15, 2018, and that is just almost two years after it was valued at around $0.3. From the Investors’ point of view, this token could be regarded as good enough to be considered based on historical data. However, historical data alone is not enough to judge a good investment.

Investors will need to also look at the price predictions, roadmap, and any major announcement made recently or is coming up. All these can help tell which direction the token is going in the future.

Let’s look at some of the price predictions that we have. According to Walletinvestor, NEO can give you an earning potential of +26.49% in a year as the price is predicted to reach around $114.47 in a year. The price could reach as high as $235.19 in five years by 2026. That will put the token comfortability among tokens that could guarantee good ROI for investors’ portfolios.

Notwithstanding, it is good to take your prediction from multiple sources for the sake of comparative analysis. It ensures the picture is very clear and you have a good idea of that particular token trajectory. So, we have another prediction from Longforecast and it is pointing at a steady rise of the token’s price followed by a drop in price in the future. The site is predicting the token to reach $108 by December 2021. That price increase is expected to continue into 2022, which could see the token reach as high as $137 by July. However, from there onwards, it could steadily decline all through to 2025.

According to Digitalcoin, the price is predicted to keep increasing over the coming years. In a year, the price of the token could reach $175.71. Going further, the token could increase to $198.53 after two years and $327.04 after five years.

Let’s head to crypto Twitter for their view on the price of the NEO token. It appears not much is being said on its price prediction on Twitter but we manage to catch one or two predictions there. Twitter user Mr Nas drops his forecast for 2022/2023 and he is predicting the NEO token to reach $300. He believes the token will rise and that we can see from his prediction.

Another user Moneyforjam is predicting the token to reach $209 by September 2021 or by the end of the current bull run in the market.

Also, we take a look at the predictions coming from the YouTube crypto community. YouTuber Crypto Kingdom believes that NEO will continue to witness steady growth as the token has good potential for growth. However, he doesn’t think the cryptocurrency can reach $500. You can watch his full briefings below:

Another YouTuber Skinny Moon Hunter holds that NEO will continue to rise steadily. He believes that from the trading pattern, NEO could be on a nice impulsive wave towards the upside. You can watch his full analysis below:

Going by the fact that NEO has previously reached ATH of $187.4 in the past then there is a possibility for NEO to reach $200 in the future. However, that may not happen in 2021 going by most of the predictions that we have seen so far. If it keeps up its current trajectory then we could see $200 happen in a timeframe of 3 to 5 years. As Digitalcoin puts it, NEO could reach $200 as early as 2023.

Yes, there is a possibility that NEO will surpass its previous ATH. Going by the prediction by Digitalcoin, NEO could reach $213 by 2028 putting the token conveniently past its previous ATH.

Is NEO Going to Crash?

Not many tokens can boast of being in the good books of the Chinese government that is known for its tough stance on crypto matters. NEO is one of the few tokens that can boast of that. As such, it has garner loyal followership that should see it sustain its momentum. That makes the idea of crashing very unlikely.

Is NEO a Legit Project or Scam?

No, it is not a scam project. For a token that has been around since 2016, that is long enough for it to have been exposed if it was a scam token. It would probably have died off since then. However, that is not the case. Instead, the token has established itself firmly in the crypto market.

How to Get the NEO Token?

The token is quite popular, which means you are most likely to find it listed on major trading platforms like Binance, FTX, KuCoin, CoinTiger, Huobi Global, Poloniex, OKEx, etc. However, you are not going to find it on Coinbase. There are several trading pairs available for the NEO token such as BTC, BUSD, USDT, TRY, BNB, ETH, among others.

So, there are many platforms available for investors to dig into the NEO potential.

Is NEO a Good Investment? – Conclusion

One thing about the NEO protocol is that it is quite popular in the Asian market and that gives it a significant boost in claiming a good portion of the market. Also, the team behind the protocol is constantly working on improving it. The upcoming release of the N3 upgrade is a good example of the continuous work being done by the dev. team. So, talking of one of the top platforms for DApps development, NEO is certain to feature.

There is something about NEO, which has caught the attention of the Chinese government. Given the stance of China on cryptocurrency, NEO has surprisingly been given special treatment. Additionally, it enjoys patronage from big companies like Microsoft China and Alibaba. This is a favorable factor for the price and performance of the NEO token in the market. Something that investors are certain to find interesting.

Another important aspect of NEO that gives it a good stand in the market is that it is much easier to create smart contracts on the protocol than Ethereum. Why? The platform supports common programming languages like C++, Java, among others compared to Ethereum that requires that you learn Solidity before building smart contracts on its network. This means NEO is open to more developers and that gives it the chance to create more value for its token in the market.

To round things up, crypto investment is highly rewarding and risky. So, due diligence is required when investing.

Is LUNA a Good Investment?