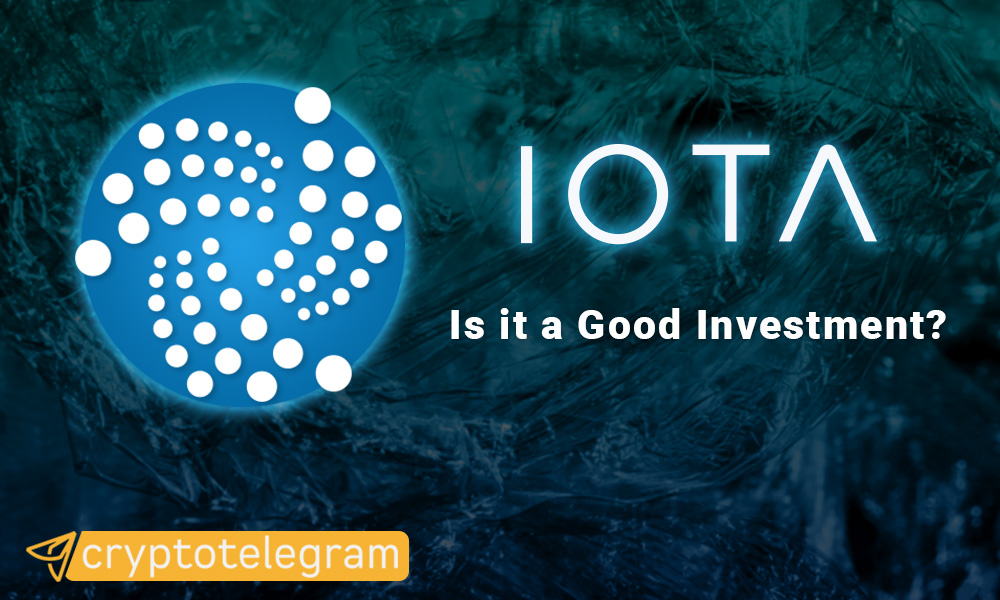 There is virtually a cryptocurrency for every sector you look at these days. We have seen cryptos targeting the supply chain, real estate, etc. What about a cryptocurrency that is targeted at the Internet of Things (IoT)? That is what IOTA is; the protocol was built in 2015 with IoT in mind. Popular examples of IoT include smart home assistants like Echo, autonomous cars, smart lights, among others. So, IoTs are simply machines with the ability to communicate with one another via the internet and sensors. The goal of IOTA is to make this communication more efficient and secure.

Naturally, this is certain to interest investors looking for where to put their money. At the same time, investors will also want to know if IOTA is a good investment. This can be determined by the value the project creates and what it offers. At the same time, other market factors come into play in influencing the value and price of the project’s token. Where does this crypto stand in the market and what does it offer investors seeking to invest in the token? Most importantly, is it a good investment? We are about to find out.

There is something unique about the offering of IOTA. It is not dependent on blockchain for its activities. Rather, it depends on several IoT apps for its functions. This way, the protocol can provide scalability on another level to what we have in the market at the moment. This also presents limitless use cases for the protocol.

It is interesting to know that the protocol’s co-founders’ original intention for it was to be an IoT hardware chip manufacturer, and that is actually how they started. The protocol is able to execute transactions between devices and machines as well as record them inside the IoT network. They saw the potential of this ecosystem and decided to change their aim and extend their reach into the decentralized ecosystem of IoT. With IOTA, developers can establish different kinds of use cases and features of IoT. As such, it helps to boost the adoption rate of IoT technology.

Whereas cryptocurrencies like Ethereum use blockchain technology for transactions where miners are expected to verify them, IOTA uses something different, something called Tangle or known technically as Directed Acyclic Graph (DAG). What this mechanism does is eliminate the need for a miner. Instead, replacing that role with a chief coordinator which, in turn, helps lower the cost of transactions to the barest minimum. That is why the protocol is among the cheapest in terms of transaction fees.

Unlike blockchains that need more assets and are resource hungry, the Tangle is the opposite of that. The use of the Tangle mechanism results in improved adaptability and a faster and more secure network.

IOTA: What Makes It a Good Investment?

What is it about IOTA that could make it worth the trouble for an investor? The answer could lie in the sector that IOTA is designed for to flourish. That is the IoT industry. IOTA is a token built to serve as the pillar of IoT. IoT is gaining relevance quickly in the world market and one thing about them is that they create many useful data that remains mostly untapped. This is what IOTA is looking to solve through its feeless crypto network, which is capable of working on even the more modest IoT devices.

One thing about other blockchain networks is that they were not built with the IoT in mind making them ill-equipped to use or combine with the technology. The infamous scalability issue of Bitcoin and the likes means it will be difficult to use them for IoT. The scalability problem also makes tiny fraction transactions difficult to make due to huge network fees. That is why IOTA is built to provide scalability, a fast transaction process, and the ability to make microtransactions easily.

The Features That Make IOTA Unique

The IOTA protocol has two features that give it uniqueness, which is something that investors could find interesting. The first one is Tangle, which we have made mention of already. This feature is why IOTA can provide almost limitless scaling while removing the presence of miners in the transaction process. How so?

On the IOTA network, every transaction has to process two more before being accepted on the protocol. The power needed for the Proof of Work here is very low to the extent that just any capable device will do so. As such, the presence of a miner to maintain network integrity is not needed. As a result, removing the mining fees.

When it comes to scaling, Tangle has a way it gets by that other blockchains can’t. During blockchain transactions, they are all processed together in a group. However, this becomes an issue when there are many transactions yet to be processed. So, when these transactions are unable to fill into the current block then they won’t be processed until the next block. That is not the case for Tangle as it processes every transaction separately. Each transaction has to process two other transactions whether indirectly or directly. This way Tangle can host limitless devices.

The second unique feature about IOTA is quantum-proof. This feature allows IOTA to use a hash-based signature instead of elliptic curve cryptography. This is faster and makes the process of verification and signing simple. Both features are built into IOTA to make it distinctively tailored for IoT devices.

IoT Is The Future: Why IOTA Can Also Be The Future

Reports have it that the IoT network has about 20.4 billion devices worldwide and the revenue this sector is raking in stands around an impressive $212B. It is also predicted to experience more glaring growth in revenue in the future. This gives you an idea of the potential that is available for tapping if cryptocurrency is brought into play in the IoT ecosystem. This is something IOTA is looking to provide as we can see the potential the protocol has for many use cases in the IoT network.

For you to know how much potential is there in the IoT ecosystem especially in terms of revenue. You just need to look at the past growth. In the first quarter of 2019, it was reported that Amazon sold more than 100M Alexa-connected devices. The market is now filled with an infinite number of smart devices that users can choose from. This makes this a fertile ground for IOTA to thrive.

On the part of IOTA, it is hoping to solve some of the obvious problems found in the blockchain and IoT industry. For starters, IOTA offers another option apart from the blockchain network that hosts DApps programming.

IOTA Price Prediction: Is It a Worthy Investment? 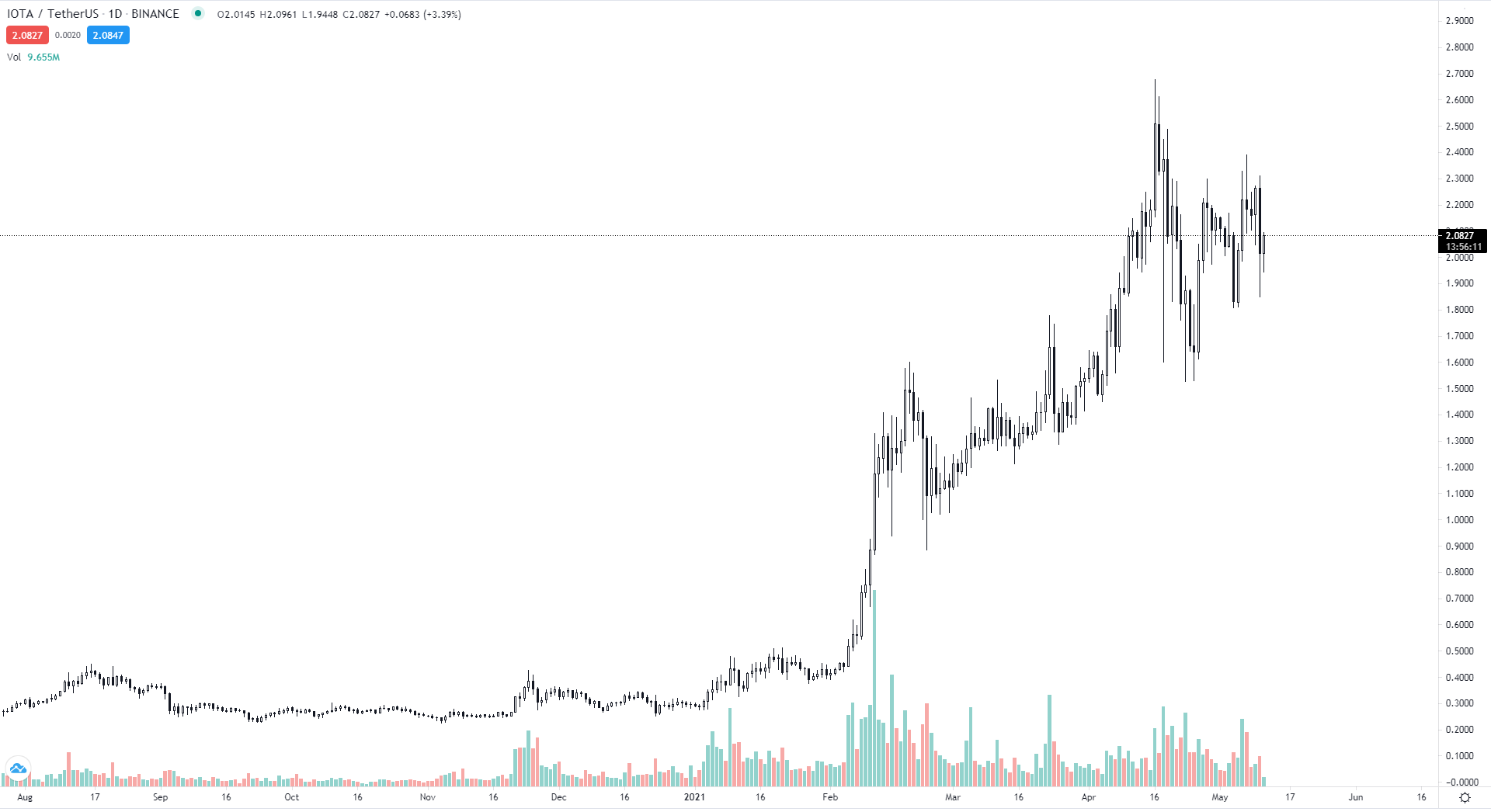 IOTA has delivered some serious numbers in terms of ROI since its ICO. We are looking at 9000% ROI for investors who bought early during its ICO. Its native token MIOTA is on a steady move back up the chain after a decline in price in the past. The long-term future of the token is inescapably tied to the future of IoT. So, provided the IoT industry continues to grow then there will continue to be many use cases for the protocol. That means it will be able to continue providing value and as a result, continue to grow the price of its token. This is good, especially for long-term investors. According to Coinmarketcap, this token is ranked among the top 30 coins in the world right now. It has a maximum supply of 2,779,530,283 MIOTA tokens and a circulating supply of 2,779,530,283 MIOTA tokens. It is currently trading at the price of $2.19.

Let’s look at the experts’ opinions concerning the token’s growth. Let’s see if there are indicators that the token is on a good run and will continue on it. According to Walletinvestor, the market indicator over the past 30 days suggests that the coin is on a bullish run. They are predicting the token to continue increasing in price. In a year, we could see the token reach a height of $2.7. In the next five years that could increase to reach as high as $5.138.

The view of crypto twitter on the token is generally optimistic. Twitter user IOTABIAN believes IOTA could reach as high as 5,72$ in 2021 and by 2023 we could see IOTA reach the $7 mark.

Let’s see what is being said about the token on YouTube. YouTube crypto analyst MattyG believes that IOTA is about to break out and could head towards $4 once it does. He is predicting the toke to hit at least $3.32 by the end of May. You can watch more of his briefings here:

Another YouTuber SkinnyMoonHunter believes that IOTA will continue its uptrend and remain bullish in the market. He believes trading should be done with caution as its price could fall a bit before shooting back up. Watch the full video below:

It won’t cross the $10 mark anytime soon as most of the predictions show that it will be below that in the next five years. However, Coinswitch is predicting it could cross the $10 mark by 2030, which is about 9 years from now. Nevertheless, several factors could play out and hasten the realization of a $10 IOTA token. For example, a major breakthrough in the IoT industry could boost the adoption rate of IOTA and that could jack up the price faster.

That is unlikely for the foreseeable future as most of the predictions that we have are not pointing at any possibility for that to happen.

Can IOTA Ever Crash?

It does not look likely as the token has a very strong use case as it targets the IoT industry. Given that it ranks number 35 on coinmarketcap, it shows that it has a strong following in the market. That should be able to keep it afloat as long as it continues to deliver on its goals.

Is IOTA a Scam Project?

The token has strong backing in the market and it is listed on several reputable exchanges around the world. If it is a scam token, it will have been taken down from most of these exchanges since.

No, IOTA is not dead.

Numbers don’t lie. IOTA is in the top-30 most valuable crypto projects in the world. The IOTA Foundation continues to build, attracting high-profile partners from different sectors, primarily industrial, across the globe.

Besides, as IOTA builds to eliminate the central Coordinator and give control to the community, ensuring complete decentralization, IOTA was one of the top-performing crypto assets in the first half of 2021.

How To Get The IOTA Token?

The MIOTA token is tradable on several popular exchanges like OKEx, Binance, and Bitfinex. There are various trading pairs available such as BTC/MIOTA, ETH/MIOTA, etc.

Is IOTA a Good Investment? – Conclusion

The IOTA protocol offers something refreshing to what we have in the blockchain sector. The breakdown of the protocol shows a deviation from the norms of the decentralized industry. Also, IOTA is considered arguably the first IoT-centered cryptocurrency and given the positive adoption rate of IoT devices. This bodes well for the future of the protocol.

So, it is certainly a project bound to interest investors, and the fact that the token is ranked number 30 on Coinmarketcap means that there is something good about the token.  Alternatively, it means that the developers behind the protocol are doing something good with the project that is keeping users interested. The market indicators look good at the moment to suggest that IOTA could be a good investment. So, it’s worth keeping an eye on this one as you scout for portfolio-worthy tokens.

Is SOL a Good Investment?

How and Where You Can Get Interest on Stablecoins?