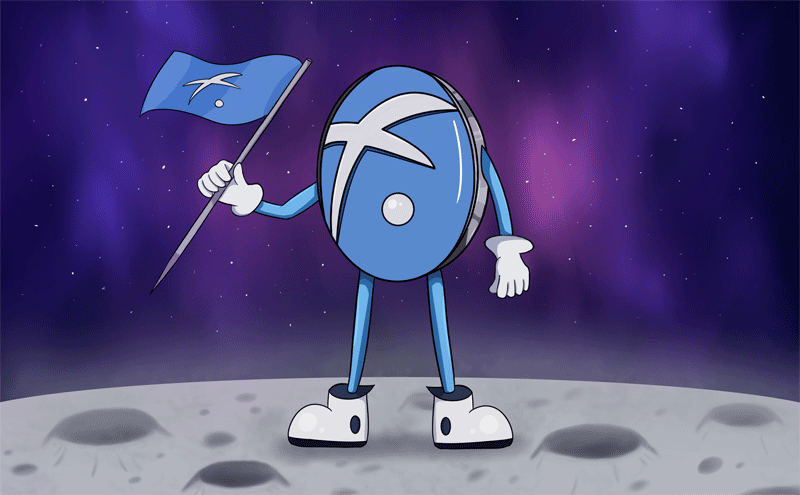 If you ever conducted your due diligence and researched the leading interoperability solutions you have probably heard about Fusion. In that case, the very first things that you have learned about the project might have caused you to ask yourself if Fusion is a good investment. After all, the Fusion network is one of the top 10 active networks in the entire blockchain industry.

In this article, we will divulge the intricacies of Fusion and how it helps connect financial on-chain networks. As we have seen in 2020, decentralized finance is the future and this cross-chain protocol might as well help bring massive adoption. On that account, we will explain exactly what Fusion is and how it can help the industry, as well as what makes it a good investment.

The History of Fusion and What It Is

Fusion arrived in December 2017 with the release of its whitepaper. The whitepaper shed light on how blockchain technology can help with the new world of ‘cryptofinance.’ We might as well say that the whitepaper released three years ago is a precursor to what we know today as decentralized finance or DeFi.

At the time, Fusion set the very same goals that it has today, scalability, interoperability, and inclusivity. It was finally time to restructure the industry into a form that enables massive adoption levels and Fusion was there to pave the way.

The Fusion Foundation was founded by Dejun Qian (DJ Qian), the CEO of BitSE, a blockchain incubator that led to the creation of VeChain and QTUM. After releasing the whitepaper and envisioning the future of blockchain finance, Qian announced the Fusion (FSN) ICO which ended on February 11, 2018, and gathered $42 million. From that moment, the project was ready to provide a platform that would solve the fundamental problems of blockchain technology. 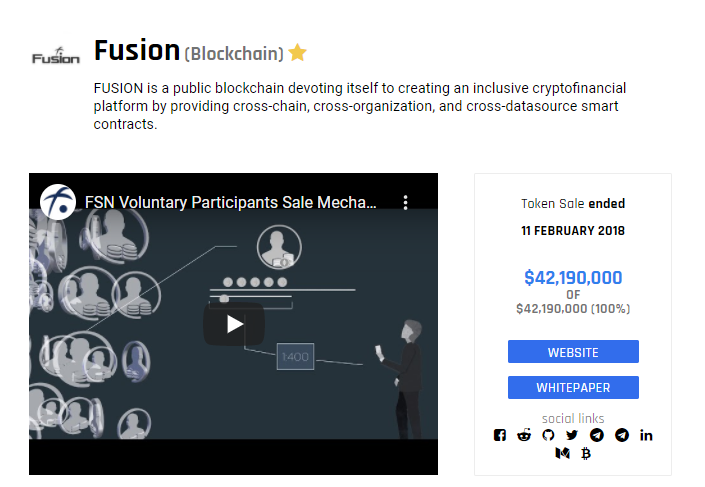 Years later, the interoperability solution became one of the most popular and advanced blockchain networks in the entire industry. As of October 2020, Fusion is ranked as the 10th most active network. So how come have the developers achieved this much progress in only two and a half years after the ICO? 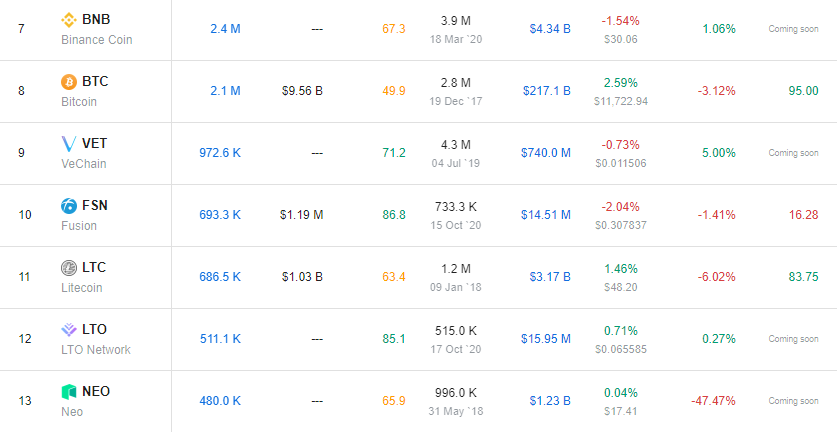 Simply put, decentralization is what made Fusion such a popular option for blockchain-based finance. To even surface on the market a protocol must lower centralization as much as possible. And to compete with the rest of DeFi, such a protocol is absolutely required to be always 100% decentralized. In the end, what is the point of developing a blockchain project if you are still resuming the traditional line of thinking that you require an intermediary?

Not only did the Fusion team bring a viable solution, but they also brought together a developer community that continues to implement the protocol’s features into dApps. Early on, the team figured out that a community of loyal and honest developers is the key to creating a healthy ecosystem. By doing so, they turned the project completely open-source. They have also fostered a FOSC (Fusion Open-Source Community) of more than 500 individuals. This group is filled with developers, translators, designers, marketing experts, and other diverse roles.

The Fusion team still plays the most important role in the project’s development. Nevertheless, the FOSC still plays a significant part in the Fusion Network by bridging the gap between developers and users and making the protocol more accessible. An interoperability protocol is only as good as its adoption rate, and to achieve that the community must integrate Fusion’s solutions into dApps, exchanges, wallets, and all kinds of blockchain projects.

Aside from the cross-chain protocol, there is also an FSN token. Not only does it make Fusion sustainable, but it also helps other users access the full suite that the project offers as well. Therefore, FSN contains both speculative and utility values. To ensure proper levels of decentralization, the team went as far as to ensure that the token is evenly distributed to avoid any potential manipulation.

What Fusion Brings to the Blockchain Industry

But aside from the little details that we have now learned, what are the specific technologies that Fusion brought to the blockchain industry? Developers should prepare for an enjoyable section as we will present the most important features that Fusion implemented.

Distributed Control Rights Management (DCRM) is the most important technology that the team developed. It makes the core of Fusion’s interoperability. Patented, DCRM works as a decentralized custodian that distributes private keys on multiple nodes via the help of sharding. It is easy to take control or manage someone’s assets if the individual’s private key is kept in a single centralized database. Especially if it does not have any serious form of protection. To truly safeguard assets, DCRM divides, encrypts, and relays the pieces of a private key to multiple nodes on a blockchain network. 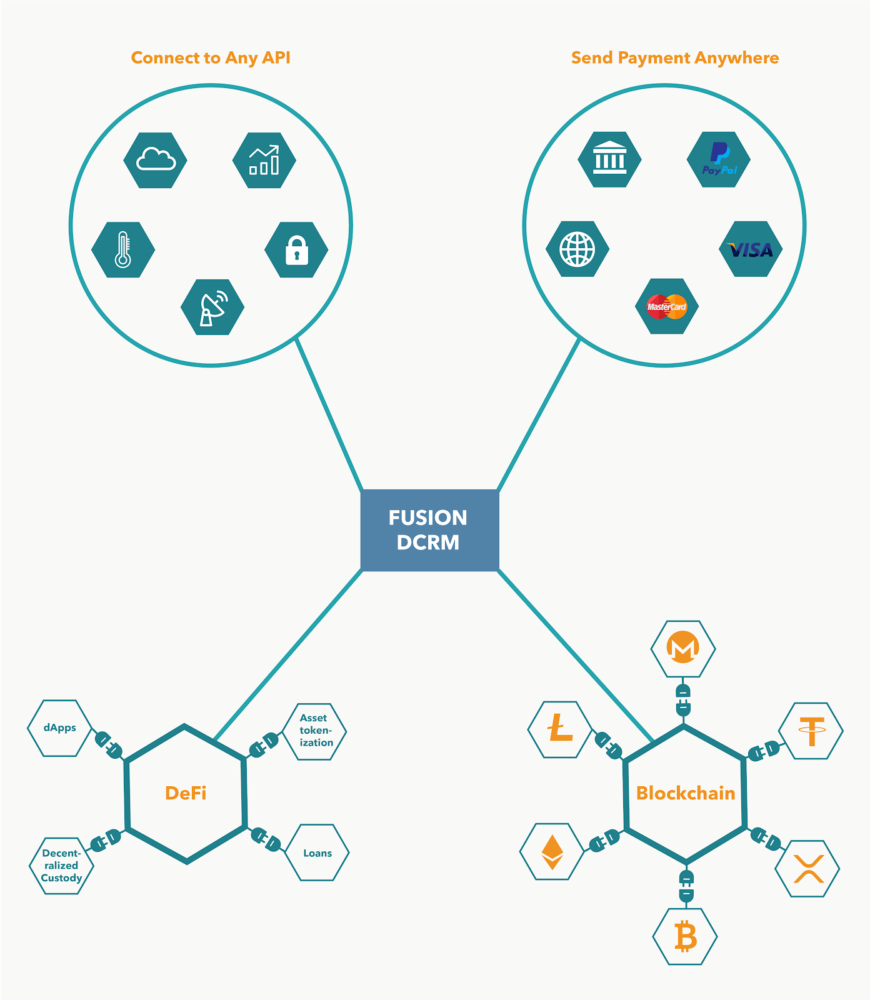 Fusion developed DCRM for more than a year. Now, it is an even better option compared to atomic swaps. Moreover, DCRM technology is also better than systems such as sharded key storage schemes and safer than multi-signature schemes. DCRM distributes private keys upon generation and they are at no point revealed from the time they are created to the moment they are stored.

By doing so, the protocol ensures the ultimate safety of storing digital assets.

DCRM has multiple use cases for storing cryptocurrencies. For example, exchanges, wallet providers, and custodians can utilize DCRM as an extremely secure hot wallet solution. The technology can even be adopted in the cases of non-custodial solutions such as DeFi.

Users have access to a radically different key recovery system through DCRM. The system gives an individual only 2 out of the 3 key shards. The provider receives the third shard. Additionally, the user is required to use the two key shards he has to sign all transactions. By creating such a system Fusion ensured an economically viable and secured multi-sig solution. It also represents a great option for key recovery. For example, the individual can keep one shard and use it with the provider to sign transactions while utilizing his second key chard for restoring wallets or creating more keys.

Anyone can download the DCRM SDK (Software Development Kit), join any online blockchain network, and momentarily start building with Fusion. It is really that simple to engage with the protocol and feature it into other platforms with the help of its inherent decentralized and blockchain-agnostic nature.

Apart from custodian services, is there anything else that Fusion can do? Actually, there are a lot of use cases in which the protocol can be implemented. The team seeks to enable users to extract the time-value of their assets. We can do that starting from the everyday things in our lives to complex financial instruments.

For example, an artist and music producer can utilize Fusion to digitalize his music. He does so by creating a supply of time-locked tokens. The artist can sell these tokens to listeners, who can spend them to listen to a song for a limited time. You can even achieve this by giving the rights of a song or album to a massive streaming platform like Spotify so that a user monetizes his creative flow.

As we mentioned, you could even adopt the Fusion network for complex financial instruments and assets. For example, an individual could digitalize a building and implement it as collateral for bonds. Or perhaps, a home-owner can rent his house by digitalizing keys. He has the ability to turn them into smart locks that determine the time a person can use the house for. This would completely remove the act of physical key delivery or booking platforms.

Users can even implement the concept of time-locked tokens by managing foreign exchange risk or receiving cash in advance on future revenues. The truth is, developers and users alike can adopt Fusion for any sort of activity or object that has financial value. It only takes a vibrant imagination to figure out where time-locked tokens or DCRM custody have potential. Once you figure that out, you will realize that the sky is the limit.

Is Fusion a Good Investment?

After all the new information you have just absorbed, it is finally time to ask the big question. Is Fusion a good investment? Based on the previous sections, it is easy to conclude that the FSN token is indeed a great investment. By investing in FSN, you are investing in the tenth most active blockchain network in the world.

With the token, you have access to the entire suite of technologies and features that the Fusion Network offers. Moreover, it also helps you interact with other networks and build dApps and DeFi-based solutions.

At the time of writing, Coingecko ranks FSN at 275th place on its leaderboard, showing that it only costs $0.3. For a project of this magnitude and activity, the price is relatively cheap. But paired with the right tools, you can make the investment decision of a lifetime.

For example, FSN holders can participate in the DeFi market by providing liquidity to yield farming platforms. One such platform is Anyswap, a decentralized exchange (DEX) entirely based on the Fusion Network. There, you can join various liquidity pools and start earning cryptocurrencies right away. But to participate, you must provide liquidity through the FSN token. By doing so, you have the chance to mint 6 different cryptocurrencies. 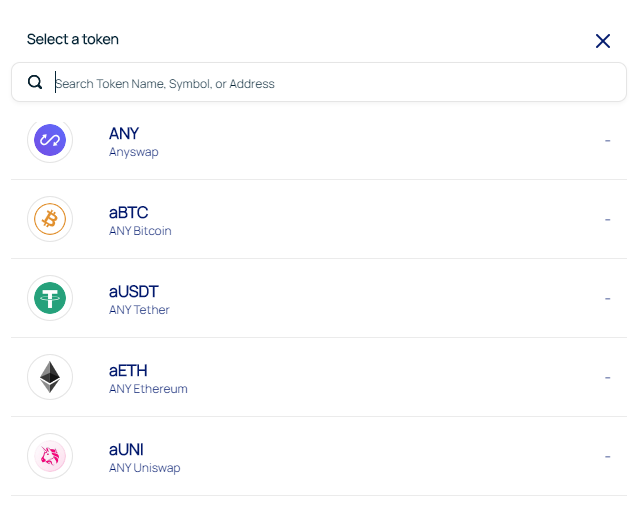 First, you can use FSN to earn more FSN if you are bullish on the future of the network. Otherwise, you can mint ANY, BTC, USDT, ETH, and even UNI. In the future, the Anyswap team plans to add two more LPs, XRP and LTC.

Note that ANY is the governance token of the Anyswap DEX. By owning the token, you can vote to add new liquidity pools and implement changes to the exchange. You can even earn passive income through it. The holders of this token earn around 9900 ANY on average per day. You might even be amazed to hear about the returns that Anyswap rewards users with. For example, you can earn a 927% APY return on all APY pools or 159% on non-APY pools. Therefore, it does not matter whether you own either ANY or FSN. Both tokens guarantee a steady and rewarding stream of passive income.

Speculative wise, the FSN token is a great investment as well. If we see Fusion become the leading interoperability solution, used by all blockchain projects to connect to each other, the value of FSN would explode. After all, interoperability and scalability are the two biggest problems modern blockchain networks have. In this case, Fusion provides a solution to both problems. With the help of the native Ticketed Proof of Stake (TPoS) consensus model, the network can support up to 3000 transactions per second. On average, block times would take only 15 seconds.

After more than two years of development, the Fusion Network finally became a leading product in the niche of interoperability solutions. In October 2020, Fusion reached the 10th place as one of the most active blockchain networks in the industry. With proven interoperability and scalability metrics, it is only a matter of time before the relatively unknown project becomes a necessity for all other networks.

Massive blockchain adoption is only a couple of years away. To reach that, we require complex and functional solutions to one of the biggest problems in the industry. Thankfully, both developers and users can rely on what the Fusion team successfully developed in the past few years.

Disclaimer: The information in this article is for educational purposes only. Please do not treat it as investment advice. Do your own research.

Is Polkadot (DOT) A Good Investment?