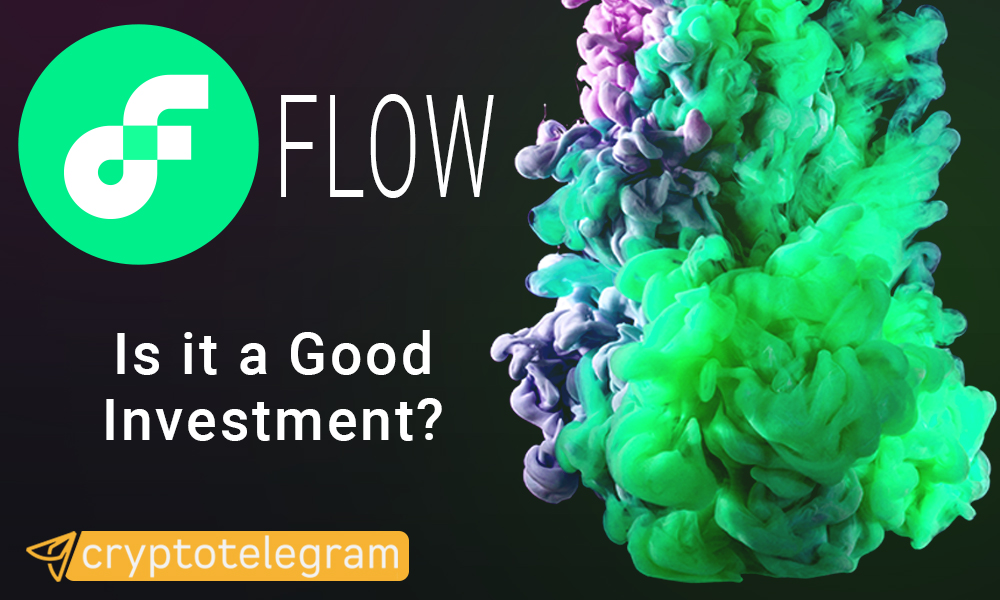 Flow cryptocurrency is one of the crypto projects that are making waves in the crypto space.  It was developed by Dapper Labs, the same people that also created the popular CryptoKitties in 2017.

This cryptocurrency, which was designed to become the pillar for the next generation of dApps and games, has grown in popularity in early 2021, and this is why many wonder if Flow is a good investment in the years ahead.

According to the team behind the project, the cryptocurrency was built to become the foundation of digital assets and Non-Fungible Tokens. It tackles the major issues faced in the cryptocurrency ecosystem, like the issue of scalability without sharding.

Also, it utilizes a unique architecture that permits it to deliver massive improvements in speed and throughput while preserving a developer-friendly ACID-compliant environment.

While the platform aims to become the foundation of the next-generation digital assets, it also created a feature that will allow developers to build new, unique and massive crypto-enabled businesses and dApps.

The Flow application grants users access to full control over their data, enabling them to create Non-Fungible Tokens that can be traded on the open markets across the globe.

The various features in the app have led to series of speculation about the future of this cryptocurrency. While some people believe that the Flow value will increase in the long term, some still see the coin as upcoming crypto to watch out for in the year. In this article, we look at Flow and see if it is a worthy investment in the year.

What is Flow Cryptocurrency?

Flow is a fast decentralized and developer-friendly blockchain designed as a foundation for a new generation of games, apps, and the digital assets that power them. Flow is a layer one blockchain previously developed by a team that has consistently delivered excellent consumer blockchain experiences.

Flow was created in such a way that smart contracts can be gathered in the same way that Lego blocks are snapped. It was designed to empower developers to build thriving crypto and crypto-enabled businesses. Users can create new kinds of digital assets tradable on open markets, accessible from anywhere across the world. There are four pillars that make Flow unique among existing blockchains. They are

As mentioned earlier, Flow hails from Dapper Labs, which wishes to solve the blockchain congestion problem by building one primed for games and other interactive experiences. Dapper is now using Flow for all of its own projects, including NBA Top Shot. However, it is open to other developers as well.

How Is Flow Different From Other Blockchains?

The Flow was mainly developed as a backup to games and consumer applications on day one, with the throughput necessary to scale to millions of active users. These aims led to several significant technical innovations such as;

Furthermore, the Flow network also unveiled a series of important design choices that improve the blockchain’s usability, not just for developers but also for the consumer. These new design features include upgradeable smart contracts, human readability security, and many more.

However, the protocol itself is secured by a variant of the Proof of Stake (PoS) consensus algorithm HotStuff that VMware Research originally developed.

The summary of these approaches is that it allows for transactions processed in the blockchain to have a full ACID guarantee. Thus, this makes it easier for developers in the Flow network to reuse any other developers’ code safely. This is one of the unique things that makes Flow different from other blockchains.

FLOW – The Native Currency for the Flow Network 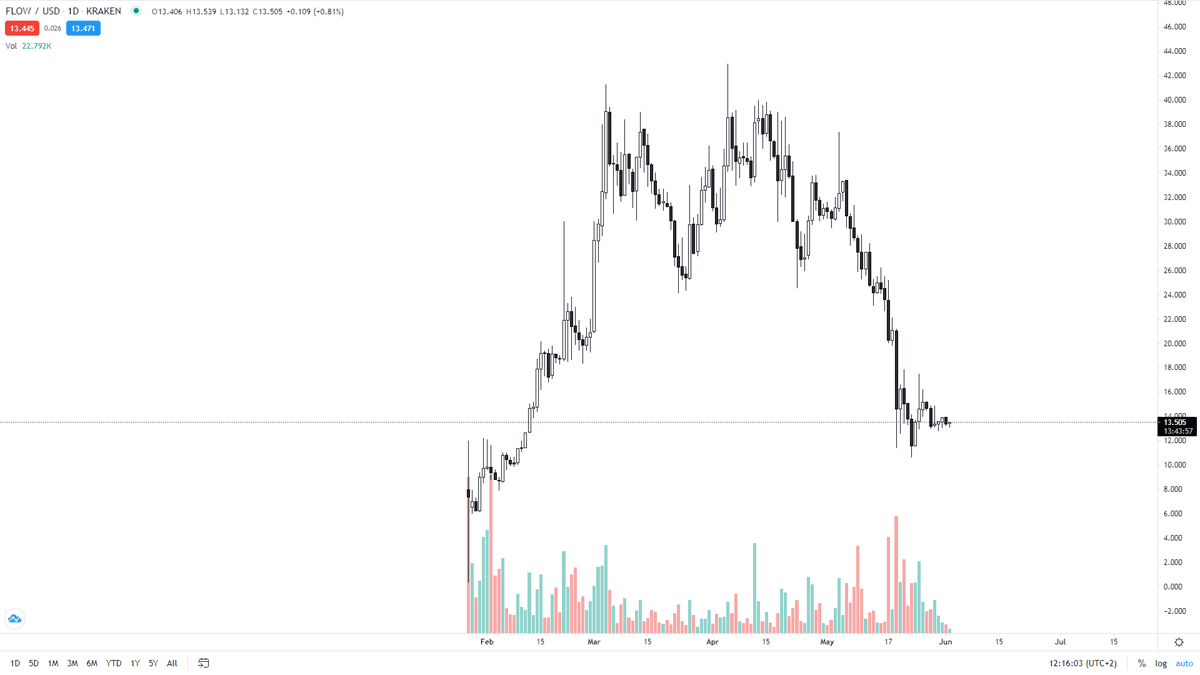 FLOW is the native governance token for the Flow blockchain network, a significant keystone for a new, inclusive, and borderless digital economy. FLOW token can be seen as the fuel that powers the network. FLOW is the currency needed for the network and all the applications on top of it to function.

The coin was designed as a payment method as well as a long-term reserve asset for the entire Flow economy. The token is used by developers, validators to participate in the FLOW network.

Also, users are rewarded with the token when they participate in the network. The token is also used to pay for fees and to participate in future protocol governance. It is used for paying transactions on the network, and it is also a token for account storage deposits.

The FLOW token is an ERC 20 token in the Ethereum Mainnet network. The Flow token was launched as part of the community coin sale on Coinlist from September to October 2020. During the launch, the token was sold for $0.10 each. A Dutch auction on October 6 increased the token value to $0.38 per token. When everything is added together, we see that over $19.5 million was raised from the token sale.

The idea of Flow is straightforward as they proposed multi-node architecture that follows traditional blockchain where all transaction performs on the chain.

So, with this new infrastructure, Flow would be able to execute a high number of transactions at a low cost with a share execution mechanism. This single feature is capable of drawing the attention of users and traders to the platform.

On Twitter, a user Cryptos Defi is of the opinion that the FLOW coin price could reach $125 by the end of the year. And it could also increase to $250 before the end of 2022. While we could not establish the basis used for his prediction, we could admit that the user’s prediction is highly bullish.

My price prediction for $Flow @flow_blockchain :

From the voting so far, we could see that over 46% percent agreed that the coin’s value would reach $120, while 26% thinks that it could get to $250 in the year. That’s another bullish FLOW price prediction in the year.

Moving forward, Gaurav  Tripathi thinks that FLOW is one of the undervalued gems. Gaurav believes that the coin could trade between $40 to $60 before the end of the year. He made this known in a post on his Twitter account in March this year.

Having looked into what these crypto traders and experts have to say, let’s do a quick dive into the opinion of crypto price forecast platforms and see if their views are the same or different.

Digitalcoinprice, a reputable crypto forecast platform, thinks that Flow coins price might likely reach $39 before the end of the year. The experts on the website used the historical price data and their in-house price prediction algorithm in their forecast. They see the coin as a profitable long- and short-term investment.

Another website, Coinarbitragebot, is optimistic about the value of the coin reaching a $30 target before the year ends, while it could get to $203 in the next 3 years. The website considered the Flow coin’s historical price data in their forecast. It is another website that is highly bullish in the short and long run.

Going further, the cryptocurrencypriceprediction website estimates the Flow coin value to reach $157 in the year. They went further to project the price to exceed $1000 in the next 5 years.

The price prognosis above suggests that the Flow coin could be a good investment in the short and long run.

Where Do I Buy FLOW Token?

Unlike popular cryptocurrencies like BTC, ETH, Flow is not all that famous yet. However, there are many exchanges where you can buy, sell or trade the FLOW token. Below is the list of top exchanges for the trading of Flow cryptocurrency; Binance, Huobi Global, OKEx, FTX, Upbit, and MXC.COM.

Also, the Flow token can be traded against fiat currencies such as the US dollar and the Euro. Cryptocurrencies like BTC and ETH and stable coins like; BUSD, Tether (USDT), and USD Coin (USDC). It can be bought and sold on both spot and derivatives markets.

What Are Dapper Labs?

Dapper Labs is the creator of CryptoKitties, NBA Top Shot, and the new Flow blockchain. The company was unveiled in February 2018 with the goal of bringing about a more open and inclusive digital world, starting with games and entertainment.

The company saw that the impact of cryptocurrency goes way beyond currency, and they built Flow to support the new generation of consumer apps, games, etc. The applications developed on Flow are crypto-enabled.

That is, they can support scarce digital assets and peer-to-peer trading, smart contracts and efficient global marketplaces, decentralized governance, user-controlled identity, privacy, and open platforms that work as digital public goods – that’s to say, software’s that can outlast its creators.

Dapper is the first blockchain interface that uses smart contract technology in the browser to give users full control over their crypto assets. According to the developers, the Dapper was built to make it easy to use blockchain safely.

Dapper was designed to make it easy for everyone to own, trade, and play with NFTs and cryptocurrencies. For example, instead of storing the private keys that have full control over your cryptocurrencies and collectibles on your device (which can be lost) or on cooperate servers (where they can be hacked), Dapper keeps everything safe in a secure smart contract on the blockchain.

The smart contract gives you complete control but automates as much security as possible to keep you safe. You can see it as a guardian of your private keys. So, this gives Dapper a limited set of powers on your behalf to reset your password if forgotten, recover your account if your device is lost, flag suspicious requests for further action, and pay gas fees for you.

Is Flow a Good Investment?

Flow could be considered an excellent long-term investment if you look into the unique features of the platform and the opinion of crypto experts. The project is moving in the right direction with an amazing team that has a nice vision.

When Flow took their blockchain into a beta Mainnet in September 2020, it went live with the first partner – NBA Top Shot. What started with few users skyrocketed to over 100, 000 users, which are most of the people behind the platform’s growing popularity.

NBA Top Shot mints these moments, which are short clips of most of the NBA best moments. The platform users can buy, sell, trade, and collect these Moments. It is mainly the buying and selling of these Moments that arose much more interest in the platform and its unique Non-fungible tokens.

Earlier in the year, that’s January 15 precisely, a purchase of a Ja Morant highlight for $35,000 (a record) created a massive buzz about the platform on Twitter and other social media platforms.

With the way the platform is moving, there is no doubt that more and more people will become interested in the Flow ecosystem. As the Flow network grows, so will the FLOW token grow, making it a profitable investment.

Flow is a project that can get worldwide attention from both blockchain developers and investors. The project is backed by a strong team of successful blockchain developer teams, which comprises of co-founder and founder of CryptoKitties along with Flow and NBA Top Shot.

The project seems to have completed most of its objectives, like; providing a blockchain with higher throughput and a unique safety for its smart contracts through lack of sharding. So, we could say that the team is successful so far.

Even the token itself is not left behind from the surge. The FLOW token has been as successful as the NBA Top Shot project – growing from less than $10 in the first few weeks of the year to more than $20. These are an indication of how popular and profitable the network might become in the long run.

While most of its popularity might be linked to the rising demand and popularity of NFTs, we are hoping that the project will grow further before the year ends.

If this article were helpful, drop your comment below.

Is Verasity (VRA) a Good Investment?

Is LUNA a Good Investment?