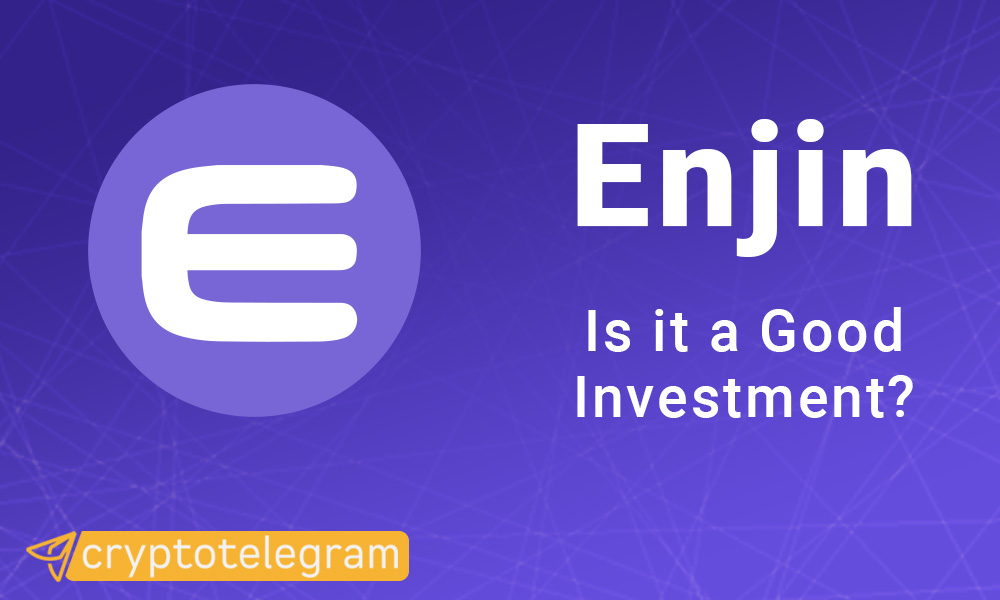 The Enjin cryptocurrency project has been growing rapidly since the beginning of the year. The platform supports over 300,000 gaming communities with 19 million registered gamers.

Since the launch of Enjin in 2009, it has allowed gamers to build websites for clans and guides, create forums, etc. The platform has added new features and innovative ideas, leading to questions on whether Enjin is a good investment?

Enjin is a mobile blockchain wallet that is very essential for the safety and security of cryptocurrency assets. The network’s security is highly impenetrable, and it was designed specifically for the traders to enjoy its feature-packed services.

In this article, we are going to look into the Enjin cryptocurrency and its features. Additionally, we will see if the coin is worth investing in the year and beyond.

With the rising number of coins and the increasing number of investments in the crypto space, it is imperative to understudy these coins and know the ones that have the capacity of ushering a high return on investment. Let’s get started.

What is Enjin Coin?

Enjin coin is a project of Enjin, a firm that supplies an ecosystem of interconnected, blockchain-based game products. The significant product of the firm is the Enjin network, a social gaming website that allows users to build websites and clans and host virtual item stores.

The core aim of ENJ is to make it easy for people, businesses, and brands to use non-fungible tokens (NFTs). And those NFTs can be traded, swapped, and integrated across platforms with the capacity to create entirely new in-app economies.

Enjin is also used to directly back the value of NFTs minted within the Enjin ecosystem.

Furthermore, the ENJ allows game developers to tokenize in-game items on the Ethereum blockchain. To achieve that, it makes used of ENJ coin, an ERC 20 token, to support the digital assets that are issued using its platform. What this simply means is that items can be bought, sold, and traded with real-world value.

The assets which are minted within the Enjin platform contain ENJ, a minting resource that is locked inside NFTs and removed from circulation.

There are loads of benefits that come with minting blockchain assets with ENJ. It gives room for transparency and scarcity, gives them instant liquidity, is anti-inflationary, and provides utility in games and apps, etc.

Since this project is an ERC 20 token, it means that it doesn’t benefit the blockchain also, but also benefits the smart contracts.

Another benefit that is being promoted by the team is that by bringing gaming on the blockchain, they will also help gamers to avoid the significant high levels of fraud which is prevalent in the transfer of virtual goods.

Enjin – the Next-generation NFTs for Everyone

If you have been following the crypto market, you will discover that NFTs have exploded onto the scene in 2021, with many crypto traders getting involved in the market.

NFTs are unique, digital tokens that run on a smart contract on Ethereum and other blockchains. They can be used for asset distribution and verification of authenticity through the blockchain.

The Enjin project is growing every day. More than 50 companies have joined JumpNet, Enjins cryptocollectibles platform.

And when it comes to NFTs, the organization is popularly known for helping Microsoft with its Microsoft AZURE Heroes, which was launched before the NFT popularity skyrocketed.

Jumpnet is a blockchain developed to host non-fungible tokens or NFTs developed for Ethereum’s ERC – 1155 standard.

This means that it is capable of carrying out transactions without depending on Ethereum’s high transaction fees and mining limitations.

Through the reduction of its reliance on Ethereum mining, the platform also limits the ecological impact. Information from Enjin shows that this method uses 99% less power consumption than Ethereum.

Barely two weeks after it was launched, more than 50 firms launched non-fungible tokens or cryptocollectibles. Among the notable partners that launched are Microsoft, Binance, and OKEx.

Enjin started as an NFT issuance platform in 2017 with a significant focus on gaming. A year later, the firm developed the ERC -1155 token standard, which has the ability to support both the crypto tokens and non-fungible tokens in one smart contract.

Meanwhile, the Enjin team announced on March 31 that it was developing a new blockchain protocol Efinity on the Polkadot blockchain network and raised $18.9 million in a private token sale.

While Ethereum is the most popular public blockchain, when it comes to NFTs, Enjin is really making headway while proving that it is not going to be a push-over project.

The Enjin Coin had the highest market cap of all NFTs towards the end of March this year. This shows that the platform could become the most sort after in the future.

How much will the Enjin coin be worth?

The Enjin platform is already making waves in the cryptocurrency market. We estimate the gaming industry to evolve with blockchain technology, and several Japanese industries have already started investing in Enjin coin.

Even at that, we look into the opinion of crypto experts and various crypto forecast platforms to get their idea about the future of the Enjin coin.

According to a Twitter user, Kerem, the ENJ coin price will reach $2 before the end of the year. We believe the Twitter user based his opinion on the historical price data of the coin and the importance of the gaming industry, and the unique features that the platform is unveiling.

Also, according to NFT Jeremy, the user thinks that ENJ price could surge to $10 in the year.

The Twitter user analyzed the prospects of the coin hitting $10 in his YouTube channel. From the channel, we could see that the user based his opinion on the various innovations going on in the network.

Another Twitter user who is optimistic about the value of the coin rising is cryptohunter, who believes that the coin’s value could reach $10 in the year.

Moving further, we look into the opinion of various crypto price prediction websites. According to Coinpedia, ENJ’s price could reach $8. The platform thinks that the coin could get to that if the community concentrates on reducing the transaction fees.

Digitalcoinprice, another crypto coin forecast platform, thinks that the Enjin coin could reach $3.63 before the end of the year and could exceed $10 in the long term.

Also, Tradingbeasts thinks that it could trade above $2 before the end of the year. The platform focused on the historical price data on their prediction.

There are still numerous platforms and individuals who believe that the coin has a bright future. Most of the crypto enthusiasts could be seen on Twitter or YouTube.

So far, with what we have seen, it is safe to say that majority sees the coin trading above $1 in the year.

The cryptocurrency market is highly volatile. It is one of the limiting factors that is hindering investors and institutions from investing fully in cryptocurrency.

However, we are optimistic that ENJ’s price could reach $10 in the long term. Currently, we are in the digital age where various technological innovations are being unveiled daily.

The gaming industry is highly developing. And considering the visions of the Enjin coin developers, the platform is capable of growing in the future. So, the ENJ coin price could reach $10 in the future.

According to Cryptocurrencypriceprediction platform, one of the top crypto forecast websites, ENJ coin price could trade above $100 in the next five years.

Although no one can accurately predict the future, with the explosions of NFTs, and the fast-rising of the Enjin market cap, nothing is impossible.

We could see Enjin coin price exploding in the future, maybe in 3- or 5-years’ time. But we are optimistic that the coins price will rise.

Where can I buy Enjin?

Although the Enjin coin is not as popular as the top coins like BTC, ETH, however, there are a host of cryptocurrency exchanges where you can buy and trade the coin.

Below is the list of exchanges where you can buy Enjin coin with a credit card, debit card, or Bitcoin. They include; Binance, OKEx, Upbit, ZG.com, Gate.io, WazirX, and FTX.

Among them, Binance is the best as it offers lower exchange fees than competing exchanges, and the increased liquidity allows you to buy and sell quickly to take advantage of market-moving news.

Is it a Good Idea to Invest in Enjin Coin Now?

Enjin platform has entered into various partnerships, which is capable of skyrocketing the value of the coin. If the coin becomes the Ethereum of the NFTs (that’s an increase in popularity), we expect a massive rise in value. The platform has already launched Efinity on Polkadot. Either way, gas fees will no longer be an issue.

Also, gamers have been touted to become one of the main catalysts to push the crypto mainstream. Imagine a situation where you develop a game and are able to sell it directly to your e-wallet or a situation where you can use your Enjin coin to order for an uber or pay for an airline ticket.

One of the popular Quora users, Marius Kramer, predicts the coin to hit a market cap of $500 billion. So far, it is above $1.5 billion. You might see it as an insane prediction, but a $50 billion market cap with a top 10 position in Coinmarketcap is highly possible soon.

The Enjin platform has also entered into numerous partnerships, which could see the platform’s popularity going high in the future. For instance, Enjin entered into a partnership with LABS Group, the first full-end Real Estate focused investment ecosystem.

The partnership will make real estate more accessible to everyone. That’s because LABS Group will fractionalize real estate assets as NFTs for as little as $100.

In summary, Enjin coin could be a good investment due to the great features in the platform and the various innovations going on in the network.

The Enjin Coin is looking to benefit from the $17 billion virtual goods market. By placing game assets on the blockchain, they hope to prevent fraud in the industry, which is believed to affect roughly 80 percent of all transactions. That would be a huge boost in the gaming industry and gamers.

So, with the vast customer base that the platform has so far, the coin should be able to reach large-scale adoption fairly quickly.

So far, the team is on the right course in meeting up with the project road map goals, and they will also need to work harder to convince investors and users to trade the cryptocurrency.

We believe that the launch of the Efinity blockchain protocol on the Polkadot blockchain network will help to protect the platform in the right direction.

If this article was helpful, drop your comment below.

Is BakerySwap (BAKE) a Good Investment?