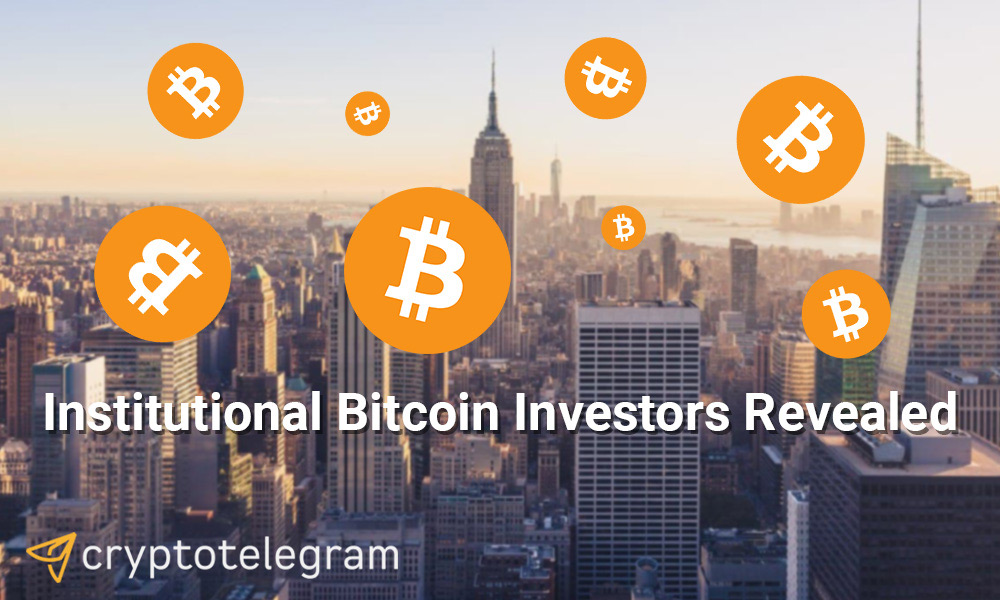 The bygone year might be remembered as pivotal in the history of bitcoin’s adoption. The massive bull run at the end of 2020 gave the BTC price momentum needed to reach a new spectacular all-time high of almost $42,000. However, the most important development to happen in the crypto ecosystem in the past year might not have been related to the growth of price, but rather to a change of mentality – and specifically, to the change in the way huge institutional investors perceive bitcoin.

The first significant institutional purchase of BTC that caught all the attention of crypto enthusiasts happened in August 2020. An American business intelligence and analytics company MicroStrategy Incorporated announced that it has concluded a purchase of Bitcoins worth $250 million at the time.

The purchase wasn’t the biggest recorded transfer of BTC in history, as amounts as big as $1 billion worth of BTC were previously transferred, usually between crypto exchanges’ internal storages or between anonymous addresses. However, MicroStrategy’s transaction was much more significant, as it was the first truly massive BTC purchase made by a renowned, publicly-traded institutional investor.

MicroStrategy’s CEO Michael J. Saylor was very vocal about the acquisition in the media. He explained the reasons for the investment by saying that he believes bitcoin to be much superior to cash and that MicroStrategy “has made bitcoin the principal holding in its treasury reserve strategy”.

Just one month later, in September 2020, MicroStrategy has further expanded its bitcoin position by buying an additional $175 million worth of BTC. Currently, MicroStrategy owns 70,470 BTC, valued at $2,459,839,914 with today’s prices, making it by far the biggest bitcoin holder among publicly traded institutions.

MicroStrategy has purchased approximately 2,574 bitcoins for $50.0 million in cash in accordance with its Treasury Reserve Policy, at an average price of approximately $19,427 per bitcoin. We now hold approximately 40,824 bitcoins.https://t.co/nwZcM9zAXZ

As of now, 19 publicly traded institutions own bitcoin. Many of them acquired BTC earlier than MicroStrategy, some of them like Coin Citadel Incorporated even as early as September 2014. Most of the publicly traded companies however only own relatively small amounts of less than 1000 BTC, which explains the tremendous impact that the purchase of over 70,000 BTC by MicroStrategy had on the entire crypto ecosystem.

It would be impossible to discuss institutional investments in bitcoin without mentioning Grayscale Bitcoin Investment Trust (GBTC). GBTC, a subdivision of digital currency investment company Grayscale Investments, is currently by far the biggest institutional owner of bitcoin, owning 572,644 BTC worth $19,988,825,993 with today’s prices.

To put Grayscale’s massive BTC position in perspective, let’s just say that GBTC owns almost 3% of all existing Bitcoins and over 50% of the Bitcoins owned by institutional investors. Grayscale also holds more Bitcoins than any of the biggest crypto exchanges with the single exception of Coinbase, which currently owns 870,000 BTC.

Grayscale Bitcoin Trust remains one of the favourite ways of investing in BTC for financial institutions such as banks and hedge funds, as well as for accredited individual investors willing to put a significant amount of money into bitcoin. By investing in bitcoin through Grayscale, institutions are able to benefit from the appreciating value of the most popular digital currency without having to go through the trouble of actually purchasing and storing BTC by themselves.

According to JPMorgan experts, the impact Grayscale has on the Bitcoin adoption is unprecedented, because GBTC allows the investors to open bitcoin positions in a regulated and controlled way of purchasing publicly-traded security, which alleviates the volatility-related risks of buying BTC on the spot market or of investing in bitcoin derivatives. Because of that, Grayscale is expanding rapidly, and only in the final quarter of 2020 has seen an inflow of institutional investments worth $2 billion.

For many years bitcoin enthusiasts have been comparing BTC to gold, claiming that the cryptocurrency can be a much more functional store of value than the precious metal that has been investors’ favourite for decades. But only with the rise of bitcoin ETFs (exchange-traded funds) institutional investors finally have a way to invest in BTC in a way similar to how they are used to invest in gold.

The impact of ETFs on the entire bitcoin ecosystem cannot be underestimated. The massive success of Grayscale has not gone unnoticed by the experts, and JPMorgan strategists claim that the rapid expansion of funds such as Grayscale Bitcoin Investment Trust signalizes that “the adoption of bitcoin by institutional investors has only begun”.

01/15/21 UPDATE: Net Assets Under Management, Holdings per Share, and Market Price per Share for our Investment Products.

One of the most recent events in the world of institutional investments in bitcoin happened at the very beginning of the new year. On the first day of trading in 2021, XBT Provider, part of the Stockholm-based group CoinShares, has registered a record-breaking volume with over $202 million worth of XBT being traded in just one day.

XBT is an ETN (exchange-traded note) provided by CoinShares, essentially being a bitcoin certificate that allows institutions such as banks or hedge funds to invest in BTC in a way similar to buying traditional financial products like stocks or bonds. By trading XBT instead of actually purchasing BTC, institutional investors can benefit from bitcoin without having to concern themselves with issues such as storing cryptocurrency.

Aside from the record-breaking single-day volume of XBT, CoinShares was also expanding its bitcoin position over the past year. CoinShares / XBT Provider currently owns 69,730 BTC worth $2,434,009,326, making the European-based company the third-largest institutional bitcoin holder, right after Grayscale and MicroStrategy.

The CEO of Coinshares Jean-Marie Mognetti believes that the rapid expansion of exchange-traded bitcoin products was caused by a profound narrative shift regarding BTC which started to be expressed by financial institutions in the second half of 2020. Mognetti has stated that “Investors used to consider it a risk to allocate to bitcoin. Now it’s a risk not to allocate to bitcoin”.

"Investors used to consider it a risk to allocate to Bitcoin. Now it’s a risk not to allocate" says our CEO Jean-Marie Mognetti

We are excited to see our @XBTProvider line of ETPs reach record trading volume of $200M and record AUM of $3.5B (as of today)https://t.co/A1n8ZSnRQT

Other providers of bitcoin ETNs similar to XBT have also registered record trading volumes at the same time as Coinshares. The German company ETC Group Bitcoin ETP noted a record-breaking $100 million single-day volume of their exchange-trading note BTCE, pointing to a very significant trend of institutions such as banks and investment funds being positive about opening bitcoin positions with instruments like XBT or BTCE instead of directly purchasing BTC in the traditional way.

An institutional investment in bitcoin that needs special attention is the purchase of $100 million worth of BTC by the Massachusetts Mutual Life Insurance Company. This particular purchase is very significant not as much because of its volume, but because of the renown and prestige of the institution that made the investment.

MassMutual has purchased $100 million in Bitcoin for its general investment fund, the latest mainstream firm to dabble in digit assets. https://t.co/zGXliuwqL1

Massachusetts Mutual Life Insurance Company, better known as MassMutual, is one of the largest and most respected insurance firms in the United States. The company has a rich history spanning almost 170 years and is listed as one of the 100 largest corporations in the US.

MassMutual acquired 5,510 BTC in December. Instead of directly purchasing bitcoin, the insurance giant decided to relegate all the technical aspects involved in the custody of the digital currency by investing in BTC through the Stone Ridge Holdings Group.

MassMutual’s investment, even though smaller than the purchases made by MicroStrategy or Grayscale, can be considered a breakthrough event in the history of bitcoin adoption. It signifies the first time when a major insurance firm decided to invest in BTC. If other insurance companies decide to follow MassMutual’s steps and allocate even a small fraction of their funds into bitcoin, the impact on the BTC price would be tremendous.

MicroStrategy, Grayscale, and CoinShares are the largest institutional owners of bitcoin, and the massive purchases of BTC conducted by these companies were widely reported in the crypto news outlets. Because of that, other institutional investors purchasing huge quantities of bitcoin in 2020 were given less publicity and the fact that four other institutions bought over 10,000 BTC each went largely unnoticed.

The fourth-largest institutional bitcoin owner is the London-based Ruffer Investment Company, which in November invested in 45,000 BTC worth almost $745,000,000 at the time. It’s worth noting that although this number seems colossal, it constitutes only 2.5% of the firm’s total portfolio, proving that institutions allocating even a small fraction of their funds to BTC can have a tremendous impact on the crypto ecosystem as a whole.

Ruffer Investment Company sold some of their gold position to buy Bitcoin.

They called it a defensive move.

One of the first big purchases of BTC made in the past year was the acquisition of 14,651 BTC by the American asset management company Galaxy Digital Holdings. In July, at the time of the purchase, these Bitcoins were valued at $134,000,000, and with today’s prices, they are worth $625,473,868. As of now, Galaxy Digital is the only publicly-traded company other than MicroStrategy to hold more than 10,000 BTC. Aside from bitcoin, Galaxy Digital also owns much smaller amounts of ETH as well as the stablecoins USDC and Tether.

The only two other institutional investors to hold over 10,000 BTC are Canadian companies 3iQ The Bitcoin Fund and CI Galaxy Bitcoin Fund. 3iQ purchased 16,454 BTC in April, while CI Galaxy bought 15,750 BTC in June.

The Impact and Future of Institutional Investments in Bitcoin

Institutional investments in BTC aren’t simply standard bitcoin purchases, just on a bigger scale. Because of the specific characteristics of financial institutions opening bitcoin positions, they have a distinct and positive effect on the crypto ecosystem as a whole.

When individuals buy bitcoin, they often do so with the intent of speculation and hoping for a short-term financial gain. Depending on the price movements, they are prone to selling their BTC often, whether to scrape the profit when the price is high or to mitigate losses when the market is bearish.

When institutions buy bitcoin, on the other hand, they do so motivated by long-term investment plants. Hedge funds and other financial institutions purchase bitcoin to put it in a cold storage in their treasury reserves, and they are unlikely to sell their BTC in the near future regardless of what the current sentiments on the market are.

Because of this, institutional investments in BTC have a decidedly positive effect on the bitcoin price. Since financial institutions acquire large amounts of bitcoin and hoard it for a long time, the liquid supply of circulating BTC is diminishing, which combined with the increasing demand causes the bitcoin price to rise. According to a recent study, due to a growing rate of institutional purchases, the current amount of Bitcoins in actual circulation may be as low as 4.2 million BTC.

The massive influx of institutional funds into bitcoin has undeniably been the most important development to happen in the crypto ecosystem in 2020. But the trend of financial institutions opening bitcoin positions seems to only be starting to gain momentum, as the noteworthy purchases of BTC by institutional investors keep happening more often and are becoming increasingly bigger.

The last year will be remembered as the year in which bitcoin’s adoption by major financial institutions started, but 2021 may very well be the year in which this adoption becomes widespread. Since bitcoin’s supply is strictly limited, more institutions investing in bitcoin out of the fear of missing out will likely cause the BTC price to skyrocket.

Will SIL Be Yearn Founder Andre Cronje’s Next Golden Project?