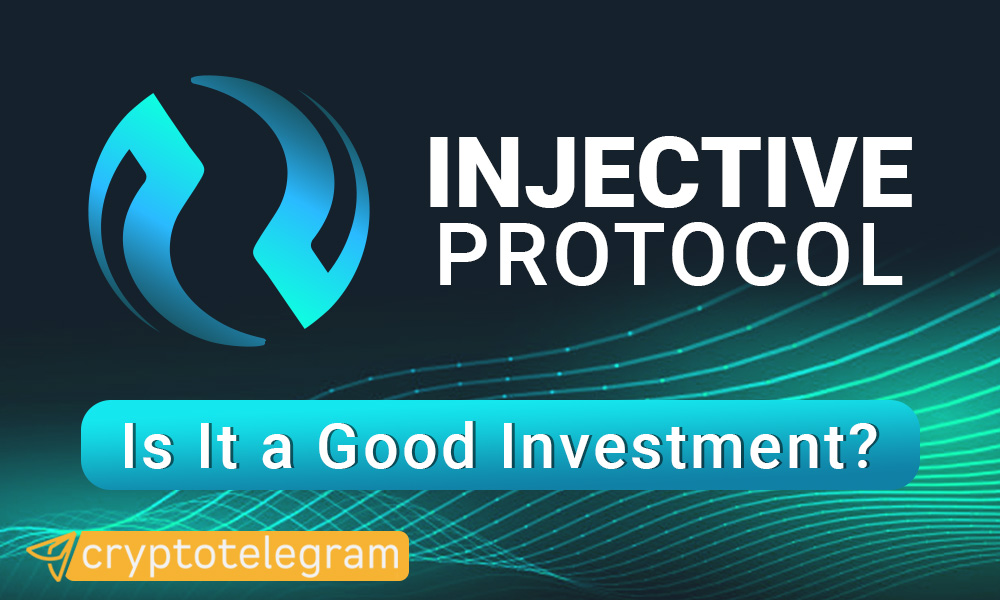 So many blockchain protocols have been created and many more are still being created just as many more will be created in the future. However, not all leave a mark as some just fizzle out. There is a protocol capable of leaving its mark on the crypto industry and it is called Injective Protocol (INJ).

The Injective Protocol is targeting the decentralized exchange sector of the crypto industry and it is aiming to do things differently from other DEXs out there. Having been in development since 2018, the project has seen experienced hands handle its development. So, what does this mean for the Injective network price and how will it add value to the DEX sector? We will examine the protocol to find out.

INJ is a fully decentralized derivatives exchange seeking to be the bridge between a centralized exchange (CEX) and decentralized exchange (DEX), and at the same time introducing the ever-growing DeFi along the way. Although DEXs have been seen as the ideal solution to the regulatory and security issues plaguing CEXs, implementing DEXs has seen its share of problems too. That is something the Injective Protocol is hoping to correct.

INJ: The Bridge Between CEX and DEX

The protocol is hosted on the Injective chain, which hosts a fully decentralized order book and uses features from the Ethereum Virtual Machine. There is a link to the Ethereum network via a bi-directional token bridge. The protocol identifies as a layer-2 decentralized exchange, the first of its kind, that brings the full potential of borderless DeFi and decentralized derivative to the fore. The Injective blockchain is operated as a Cosmos SDK module designed using Ethermint, which is the Ethereum Virtual Machine on Tendermint. The protocol carries out cross-chain derivatives transactions using a Tendermint-based PoS across many layer-1 blockchains like Ethereum, Cosmos, etc. Furthermore, the Injective network prevents front running using Verifiable Delay Function (VDFs) and is also collision-resistant.

The Brain Driving the Protocol

The company that founded the Injective Protocol is called Injective Labs and it’s co-founded by Eric Chen alongside Albert Chon. Both of them have deep experience that spans several years. Eric Chen started his professional career in 2014 working as a research fellow at Desay Sv Automotive before becoming an analyst at AXA Advisors. He co-founded the Injective project in 2018 after leaving Innovating Capital as a researcher in 2017.

His partner Albert Chon started his professional career as a full-stack engineer in 2017 working for Linc Global. He moved to Amazon in 2018 as a software development engineer in early 2018 before moving to co-found the Injective Protocol.

The Injective Protocol covers many aspects of crypto trading from DeFi, swaps, spot trading, futures, and perpetual swaps. Its native token, which is INJ serves several functions that are highlighted below:

The protocol itself serves the following key functions:

How Does Injective Protocol Work?

The Injective network is known as the first project to receive backing from Binance Labs and be listed on Binance Launchpad. Its governance is community-driven where all proposed changes will go through voting in the DAO structure. To incentivize liquidity mining, there are rewards for members of the community who participate in liquidity mining programs inbuilt into the protocol.

They are 0x based and provide full decentralization as well as making transactions more efficient. The orders on the order books can enable side-chain relays as settlement is done on-chain. Also, the order books are hosted on nodes that are censorship-resistant.

This component of the Injective Protocol blocks the possibility of front-running occurring on the order books. Front-running is the use of bots to observe the order books and having the bots copy the bids of real traders to jump the queue. This can result in increased unfilled orders for real traders causing frustration and their exodus from the protocol.

To transfer assets from the Ethereum chain to the Injective chain and back then a token bridge is needed to facilitate the transfer. The token bridge is built within the “peg zones” in the Cosmos network.

This component on the Injective chain is where smart contracts built on Ethereum can be executed. This allows the developers to build decentralized applications based on the Ethereum chain and use it in a more scalable ecosystem based on the Proof-of-Stake mechanism.

The Unique Injective Protocol That Wants to Change the World

The protocol has the goal of providing solutions plaguing the financial world using the decentralized nature of blockchain. The Injective network will give users the chance to partake in a truly decentralized DeFi ecosystem, in which they are empowered to bring new ideas to the table and make changes to the existing ones.

So, irrespective of your investment scale, whether big or small, the protocol welcomes you in, giving everyone a level playing field to participate in the trading of a diverse range of assets. It brings innovative ideas to decentralized trading and exchanges. All transaction fees are paid with the INJ coin, which allows the protocol to keep on functioning.

The INJ token rapid rise through the ranks continued through February seeing a price as high as $17. The INJ coin dipped in March and the early part of April and at the height of the bullish market, the INJ coin reached its all-time high of $25.01 on April 30, 2021. The token dipped again before rising to reach $24 on May 12, 2021, then dropping in value afterward. The Token has dropped to its current price of $7.10 as of July 15, 2021.

Going by the prognosis of the prediction experts here, the INJ token is predicted to be a profitable investment delivering earning potential of +187.47% in just one year with the price expected to reach $20.67. – Wallet Investor

According to the site’s deep learning-based algorithm, the INJ coin can be a good addition to an investor’s portfolio as the Injective network price is expected to reach $31.44 after one year and give you an earning potential of 322.84%. – GOV Capital

Using an algorithm based on historical data, the site is predicting the Injective Protocol price prediction to reach $12.16 in a year. That is almost twice the current price. – Digital Coin

Going by our analysis of the Injective Protocol, the INJ crypto is expected to reach a price of $23.3 to give investors a +223.9% return on their investments. – Cointobuy 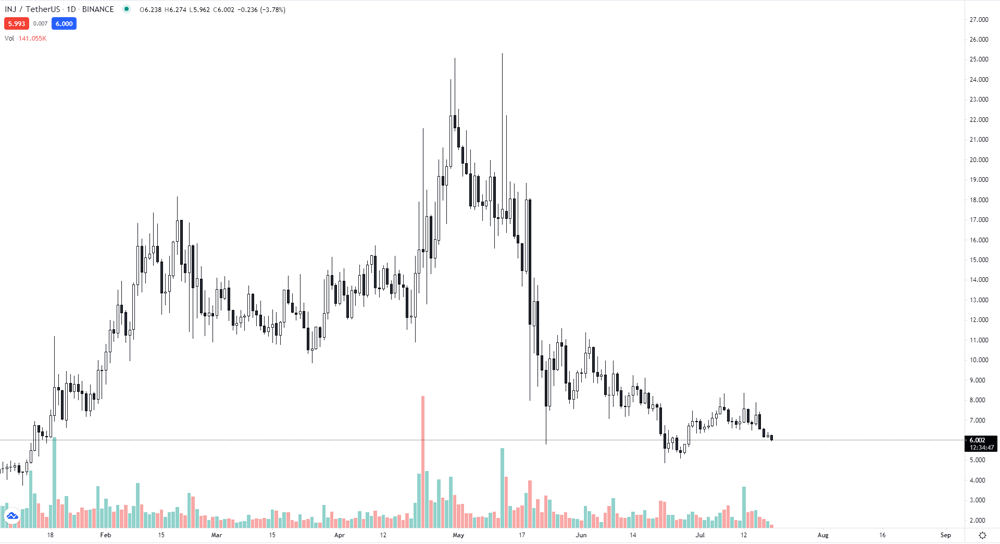 Going through the historical data of the Injective token, we can see that it has steadily maintained the upward climb even with the market ups and downs. The token has had a strong performance and that is mostly the case for tokens that constantly deliver value to users on its network. Also, all the predictions that we have shown indicate that the INJ coin will continue its strong performance in years to come. For example, Digital Coin price is predicting the INJ crypto to close out 2021 with a price of $10.27 while another site, GOV Capital, expected the INJ network price to reach $70.79.

The year started bullish for the crypto market and this certainly helped push up the price of several cryptos and that is evident with the Injective Protocol as it reached its ATH price in April. The market has since cooled off a bit as the bears have come out to play. However, the token is still expected to end the year strongly and closeout at $19.19 according to GOV Capital. Wallet Investor is also predicting the INJ coin to reach $19 at the end of the year.

The upward movement of the INJ crypto is not expected to reverse course in 2023 as several predictions have it. Wallet Investor is predicting the INJ token to reach as high as $45 at the end of 2023. GOV Capital is expecting the coin to cross the $50 by the end of 2023 and the Digital Coin price with its conservative prediction is putting the token in the region of $17.5 by December 2023.

If the token continues its momentum, then you can expect a more positive price for the Injective Protocol price prediction. As Digital Coin price puts the coin will reach the $20 mark by 2024. However, sites like Wallet Investor are more optimistic with their prediction putting the token very close to $60 at $59.67 while GOV Capital is predicting the coin to cross the $80 mark in 2024.

Where Can You Get an Injective Token?

The token is on several notable exchanges including centralized and decentralized exchanges. You will find it on Binance, Uniswap, Bilaxy, Houbi Global, etc. Binance hosts the highest trading volume for the INJ coin.

Will Injective Protocol Be Listed on Coinbase?

INJ crypto is currently not listed on Coinbase.

Which Wallet Supports the Injective Protocol?

Injective Protocol (INJ) is supported by several wallets such as Trust wallet, Atomic Wallet, Ledger, Trezor, and exchanges inbuilt wallet (though not recommended).

Is Injective Protocol an ERC 20 Token?

The INJ token was initially an ERC 20 token, however, the protocol has launched its native token. You can swap the old ERC 20 token for the new INJ tokens using the Peggy Bridge.

How Does the Injective Peggy Bridge Work?

Peggy bridge allows the Injective network to support the trustless, bi-directional token bridge where users can instantly swap the ERC 20 token for Cosmos-native tokens and also swap it the other way round.

The protocol burns about 60% of revenues generated from trading fees, which the protocol claims are more than most exchanges do.

Ethereum Hammered, But One ETH Bull Is Defiant, Says Elites Are Playing the Fear Game