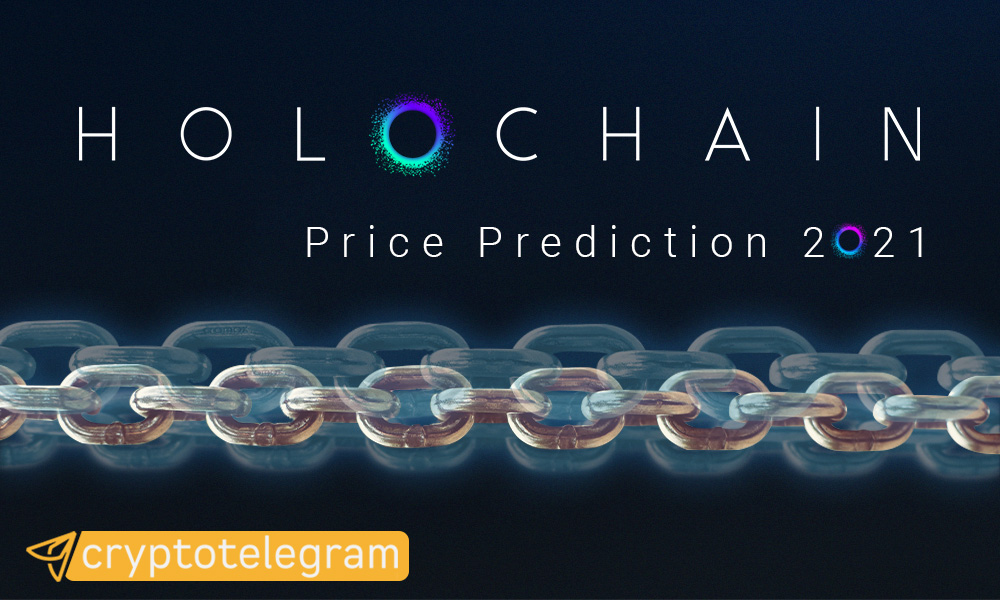 What if you could connect and still control the type and amount of information you wish to share out. That is what Holochain is aiming to build, creating a foundational tech that allows this to happen by establishing a platform (HOT) that serves as a bridge between the traditional internet and Holochain users.

This is something that will make investors casting a glance at Holochain with the potential service offerings that it looks to provide. When investors cast their glance, they are bound to want to read and observe the price movement of Holochain.

Given that, Holochain is witnessing a better adoption level and gaining more applications known as Holochain apps (hApps). This is surely going to put the chain on the mind of users and investors alike, making it something worthy of consideration in the market.

The Holochain has position itself as a cheaper option to several prominent blockchains like bitcoin while maintaining a high level of efficiency by significantly bringing down the running and upfront cost. Moreover, they introduced immediate finalization of transactions without the need for conventional consensus algorithms. This is achievable due to the introduction of Holochain’s distributed hash table (DHT). The rise in its popularity has positively affected the price of the Holo token (HOT) pushing it to new highs in recent times.

One major noticeable with Holochain is the change to an agent-centric kind of system from the traditional data-centric blockchain that we are used to. Holochain brushes off the idea of the global consensus. Instead embracing an agent system that has every agent holding a private fork, which is managed and stored on the blockchain with a DHT in a limited way.

Choosing this method helps overcome scalability problems, a perennial adversary for blockchain solutions. At the same time, enabling hApps built on the Holochain to achieve more with less compared to blockchains.

Now, Holochain itself is an open-source system on which you can build P2P dApps. In simple terms, Holochain eliminates the middle man as there are no web servers or companies in the middle of the equation. Instead, the apps run directly on the user’s device. Installing apps with Holochain gets you a private and public key that enables the user to sign documents via your own private key. It allows you to send confidential messages between parties, then allows you to address data stored in shared storage space. The hApps are installed on your device directly, and that eliminates the need to be connected to the internet to access information.

Holochain and Blockchain: The Differences

The way blockchain work is by keeping data on a distributed network through cryptographic hashes. A global consensus is formed for the verification of data and every node in the network holds a total copy of the blockchain network. This is one of the main selling points of blockchain technology.

There are weaknesses to it though. One of those weaknesses is the scalability that comes with the necessity to use every node on the network for verification of the whole chain. That means that an increase in the amount of data being processed on the blockchain leads to gradually restrictive transaction throughput. As such, users will experience increased gas fees on the network and a longer transaction process.

Holochain is built differently in the sense that the network itself is designed in a manner similar to the building of Hologram. Hologram requires the creation of a coherent 3-D pattern through precise light beam interaction. Something similar is what we have in the Holochain system, creating a coherent system via the interaction of individual components.

The Role of Holo

Holochain uses Holo as the link between Holochain and the traditional internet. With Holo, virtually everybody can become a Holo Host by utilizing the Holo hosting box via the Holo Host app. The app runs on your computers in the background and allows you to monetize excess computational power and space by earning HoloFuel.

That means as a Holo host, you get Holofuel for the spared computational power and space and that gives room for users to host hApps and data. As Holo Host, you can choose which Holochain apps you want to host, the fees they carry for the hosting, and the priority list of apps.

As we know by now Holochain also has the ability to provide an environment where developers can create and host hApps. hApps can be developed by utilizing open-source preset modules that can be sourced from utility classes and libraries found on Github. Various tools are available to use for developers including the likes of Zome Explorer Tool, Rust Holochain Development kit, Holochain RAD Tools phase 2, HoloJS Wrapper, etc.

As a non-developer, you can host hApps via HoloHost software or Holoport hardware extension by sharing your excess computational power. This allows you to earn money. So, you are still able to benefit from the Holochain even as a non-developer.

In general, it is the way it distributes computational resources and the easy development that position Holochain as an appealing substitute platform for the development of apps.

The ICO was held in 2018 and about $20M was raised, which has been redistributed into developing and researching the Holochain architecture. An updated roadmap was released this year in February, which contains the timeline of the release of the protocol mainnet and when the 1:1 transfer of HOT tokens to the HoloFuel token will take place. From this updated roadmap, it is expected that the third phase (Alpha/Beta launch of Holo suite of apps) will hold by the end of the first quarter of 2021. All these exciting releases have recently spiked the price of the token.

Holo Ecosystem: Is it Centralized or Decentralized?

The Holochain ecosystem is built to be a fully distributed protocol, which is self-sustainable. The development team knows the importance of slowly moving from centralization to decentralization for wider market adoption of its chain to occur. The lack of familiarity and understanding of decentralized technology by users used to centralization requires that these users be slowly introduced to decentralization.

That is what Holo is meant to do. To serve as the bridge that slowly brings users over from a centralized ecosystem to the decentralized Holochain ecosystem. So, Holo is the link between the two opposite worlds and as such the dev. The team knows that some part of the Holo ecosystem has to be centralized for the sake of familiarity. Prepping the users for a completely new system. This gradual introduction stands to benefit the users as they can feel the best of both worlds.

Recently, HOT has been doing well in the market and the price is showing lots of positive movement in the market. We look at some of the Holochain price forecast 2021 that we have and we see where they stand concerning the HOT token.

Early this year in January, HOT was trading at about $0.0006 before embarking on a bullish run that saw it rise in the market. Analysts here are predicting the price to continue to grow in the coming months due to Holochain introducing its own unique technology. They are projecting the token to reach something around $0.0015 by November and $0.0016 by 2021 end. Now considering that HOT is currently selling for $0.008001 as of March 20, 2021, we can say the token has even surpassed what was predicted here.

Analysts here see HOT as the token that will be doing well in the future. Here they also predicted the token reaching $0.001 in 2021 and that has already been surpassed by the token.

By combing historical data, linear and polynomial regressions, the analysts here point at a steady increase in price from the current position. They project the price to reach as high as $0.0123872 with an average price of $0.0099097. That is like a 16.78 % change in price.

We head to Digitalcoin to know the prediction they have for us and it is also encouraging. Based on their predicted data, they don’t see the HOT token going down as the price is expected to make an upward movement. They are predicting the token to reach as high as $0.01178772 in 2021.

Youtubers and Their HOT Price Forecasts for 2021

Going by what YouTubers are saying about Holochain price prediction for 2021, we have gathered some of their predictions. YouTuber crypto profit is predicting the token to reach around $0.006 and $0.007 in March 2021. Once it stabilizes on that range then there could be a big increase around the corner. You can watch the full briefings below:

Another YouTuber Sheriff Network is predicting the Holochain to go as high as $1.2 as the adoption rate of the token is growing in the market. Technical analysis shows that the HOT token is capable of reaching a $13B market cap, which will be a major boost in the price for the token in the market. you can watch the whole video below:

A peep into crypto Twitter to see what they are saying about Holochain price predictions for 2021.

A Twitter peep Mr. Hyde believes HOT will do well in 2021 judging from the roadmap. He is predicting the token to reach $0.02 in 2021. He further adds that it could surpass $1 this year too if bitcoin continues to behave well in the market.

In a poll with three options ran by Crypto mentor to ask users for their prediction for the HOT token in 2021. Of the three predictions of $0.1, $0.5, and $1 that were included in the poll, the same percentage of voters predicted the token to hit either $0.1 or $1.

This user maintains that the HOT token will go as high as $0.10 and if Holochain does a market cap reversal, it could in trillion of dollars in market cap. As such, we could see the price of the HOT token go even higher than this.

👉🏻The long-term price prediction for #HOT is over 1,000% higher than this vision here. ☝🏻I wonder if #HOT will do a mkt cap reversal. 🤔
A few of my members invested in $HOT pic.twitter.com/wXZxlGlWvM

It is unlikely to reach $1 as indicated by predictions by Digitalcoin. The token is expected to reach $0.08 by 2028. Unless there is a dramatic change in the course of the price movement, we don’t expect to see a $1 HOLO soon.

Can Holochain Test the $2 Mark?

No, the current market situation does not point at that possibility. So, it is very unlikely to happen shortly.

Is Holochain Going to Crash?

It is unlikely to happen as the Holochain protocol has a strong following in the market. However, it is still in development and hoping to have the alpha and beta stage of the protocol ready in 2021. So, its success is still dependent on how successful its launch goes and how many users it can garner.

There is nothing to suggest that Holochain is a scam project even though the project is still in development. However, caution is preached, as it seems the market is on the downside right now and it is at this point that projects like the Holochain are tested if they can survive.

So much has been said about Holochain and its potential and it affects its price in the market.  Holochain has many features to offer that make it an enticing option of a blockchain for its users. The ability to use less computational power while maintaining efficiency is a key selling point for the protocol. As such, the value and price of Holochain have been steadily increasing in the market. To watch and observe the flow and pattern of price movement, you need to check with several price predictions.

So far, all the predictions we have examined are pointing at a positive movement of the HOT token in the market. For would-be investors, it means that the token could be worthy of consideration in your portfolio.