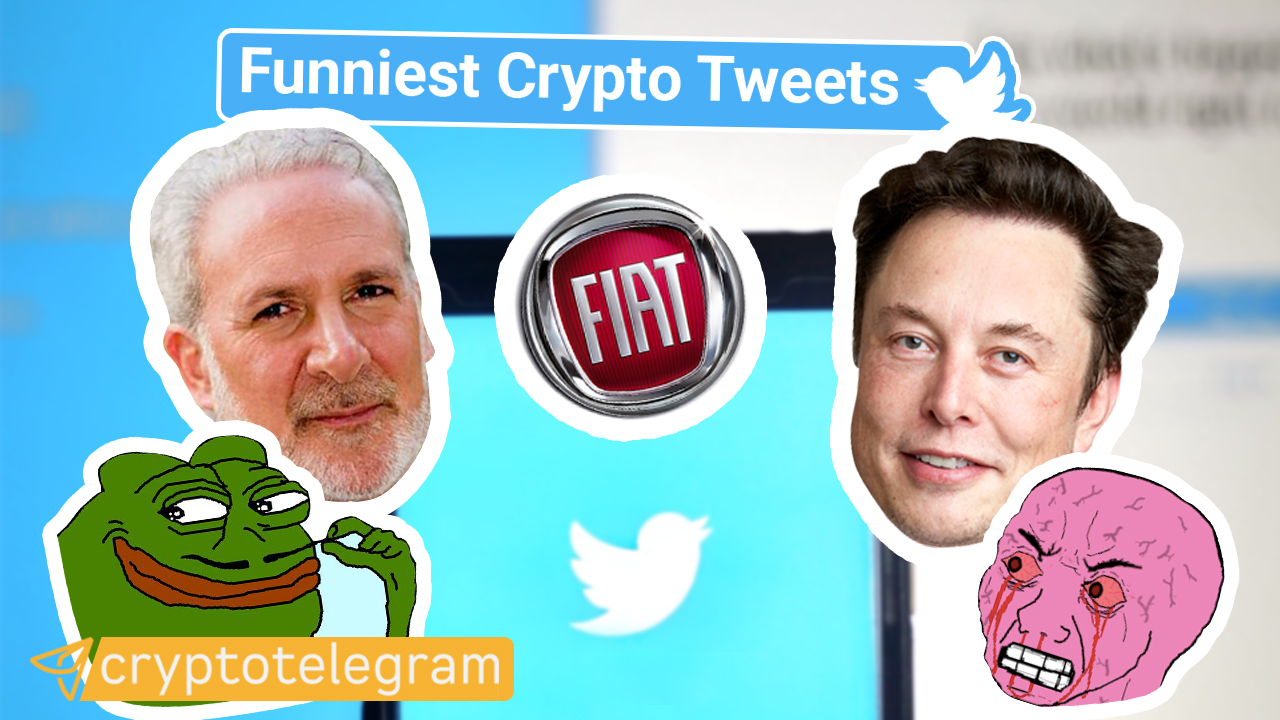 The world could always use a little humor.

Twitter has its fair share of humor. In the “meme culture” of today, humor is a great way to save us all from the misery of our collective existence.

Crypto Twitter is always on alert. To use a little pun, people who try to issue crypto criticism and hot takes are made to know that they sound a bit coin-descending.

Peter Schiff got a cold serving of crypto Twitter humor. He is a notable gold bull who always criticizes Bitcoin. In September 2020, he dragged his son on Twitter for purchasing more Bitcoin. He created an online poll for netizens to choose who was right between him, an experienced professional, and “the kid.”

The outcome was hilarious. Schiff lost the poll 81 to 18 percent!

Against my advice my son @SchiffSpencer just bought even more #Bitcoin. Whose advice do you want to follow? A 57-year-old experienced investor/business owner who's been an investment professional for over 30 years or an 18-year-old college freshman who's never even had a job.

Needless to say, Bitcoin has doubled in value since that tweet.

Sorry Peter, the Kid, and Twitter polling were right.

Bitcoin Can’t Leave “Fiat” Alone: Who are These People?

Creativity comes from all angles. Car manufacturer Fiat has a name that rings familiar to many people in crypto. Fiat is the common term for money printed at will be Central Banks.

This name often has a negative connotation when brought up within crypto.  Fiat (the car brand) tweeted as follows: 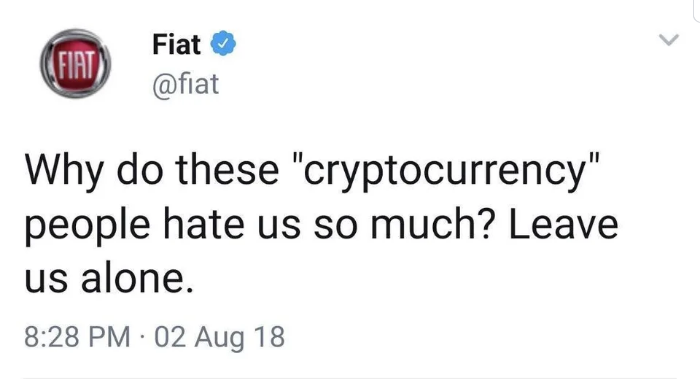 For the record, none has anything to do with the other. Fiat was having a light moment with crypto enthusiasts who consistently rail against fiat money.

Save Me from Bitcoin

Elon Musk recently became the richest person in the world. On Twitter, he makes no secret of his interest in crypto.  On December 20, 2020, he sent out this racy tweet about Bitcoin:

Bitcoin has made a resounding comeback in the past three months. Some had written crypto obituaries after the bear market of 2018, and are now licking their wounds as the pioneer crypto is almost double its previous record highs.

Musk and MicroStrategy CEO Michael Saylor had a fascinating exchange on Twitter. Saylor suggested that Musk convert the entire Tesla balance sheet from USD into Bitcoin. Musk wondered whether such a large transaction is even possible.

Tesla has had a great rally in the past year. The rally continued into 2020, pushing Musk over the top as the wealthiest man in the world.

‘Bitcoin Is My Safe Word’

In December 2020, he tweeted that “Bitcoin is my Safe word.”

Bitcoin is my safe word

This tweet is probably a dig at the college campus culture of “safe spaces.” It came as the Bitcoin rally had gathered full momentum approaching 25k.

Breaking the internet is a bit over the top, but still captures the hype that Musk generates with a simple tweet.

He has also had an interest in Dogecoin, sending out this funny tweet in July 2020:

Dogecoin is a significant coin that is seeking to implement a new instantaneous and fun payment system free from traditional banking fees. The coin features the friendly face of the Shiba Inu dog from the popular “Doge” meme as its logo.

Musk has called Doge his favorite cryptocurrency and even tweeted one word ‘Doge.’ The 40 million followers of his account is publicity Dogecoin enthusiasts could only dream of.

His Twitter feed is generally humorous, earning the unofficial acclaim of a ‘Billionaire memelord.’ Sending memes is often seen as an activity for the young, and mostly idle. As a successful entrepreneur, Musk is turning that concept on its head.

Musk’s clout with the financial world helped boost Dogecoin. He has sometimes sent cryptic and seemingly skeptical tweets about crypto. Who cares? All publicity seems to be good publicity.

The President Gave a Bitcoin Order

So much so that Bitcoin enthusiasts are making light of Bitcoin’s resilience. There have been a
few corrections, but prices seem to maintain above the $30k mark.

Incoming US President Joe Biden signed a slew of executive orders on his first day of office.
Crypto users used the moment to joke that he had signed an order making it illegal for Bitcoin
to drop below $30,000.

Well, it could be one of those “be careful what you wish for,” tweets. Regardless, Bitcoin bulls
are never shy to make bold predictions.

People who are new to the Bitcoin scene freak out when such corrections occur. Seasoned
HODLers are less panicky. They have seen their fair share of market cycles and know better than
to go into panic sale mode.

One HODLer made light of this fact with a calm HODLer on a roller-coaster ride next to a newbie who has lost it.

Ain't that the truth! #Bitcoin pic.twitter.com/vnasDgDlKz

Cardano Got the Infinity Stones

Other altcoins went through some upgrades in 2020. One of the more prominent upgrades was Cardano going through the Shelley upgrade in July 2020.

Shelley was another step in actualizing the platform’s roadmap. The upgrade introduces delegation and staking to Cardano. It had a two-year delay but came to pass, finally.

ADA prices went up in the period of the upgrade. The platform went closer to the goal of providing a public blockchain platform for smart contracts.

Some were quick to note the significance of this development, with a tinge of humor. This tweet by @Dr_shwetaPHD is one such example:

I'm not sure who originally created this one! But its just perfect!#Cardano #ADA @bloc_ki pic.twitter.com/mO3YheiL9u

If you don’t get the reference, it comes from the popular film series: The Avengers. The villain in the last two films, Thanos, went about collecting infinity stones that would grant him the power to control the universe.

This tweet represents “Shelley” as one of the five infinity stones that would grant Cardano the power to control the universe. In this context, Thanos—Cardano, has collected two stones—Byron and Shelley, and Goguen is the other stone that will find its place before Basho and Voltaire.

Thanos has become a constant fixture in meme culture because of his bravado, power, and resolve. Josh Brolin did a fabulous job in bringing the character to life.

The Humor Is Part of a Greater Cause

These tweets are funny, but more or less have the general goal of popularizing crypto.

Despite the immense publicity Bitcoin has got to date, it is still relatively low in the public consciousness. There are billions who are yet to even discover the bare minimum of what entails cryptocurrency.

Social media is a powerful tool in this challenge. Twitter reaches hundreds of millions of users globally. Facebook is even larger, with over two billion accounts. These entities eliminate the need for using mainstream media in putting out these messages.

It is not a coincidence as well that most of these voices are famous people. The reach of someone like Elon Musk is immense.  Having a huge following is Godsend for cryptocurrencies.

His tweet about Dogecoin, though humorous, was a shot in the arm for the coin. Other influential voices like Twitter CEO, Jack Dorsey, support Bitcoin, but not with the popular culture appeal of Elon Musk.

Cryptocurrency is on a roll. With Bitcoin pushing past the $40k mark, expect more of these tweets. An article about funny crypto tweets for this year could be even more exciting. The best time to buy Bitcoin was ten years ago, the next best time is now.

What Do Crypto Investors Do For Fun?

This is an exciting time for cryptocurrency enthusiasts. Every artificial ceiling that the know-it-alls had placed on Bitcoin is getting blown up.

Institutional investors are getting in on the action. It is perhaps fitting to conclude with another cryptocurrency pun:

What do crypto investors do for fun?

Is SUSHI a Good Investment?