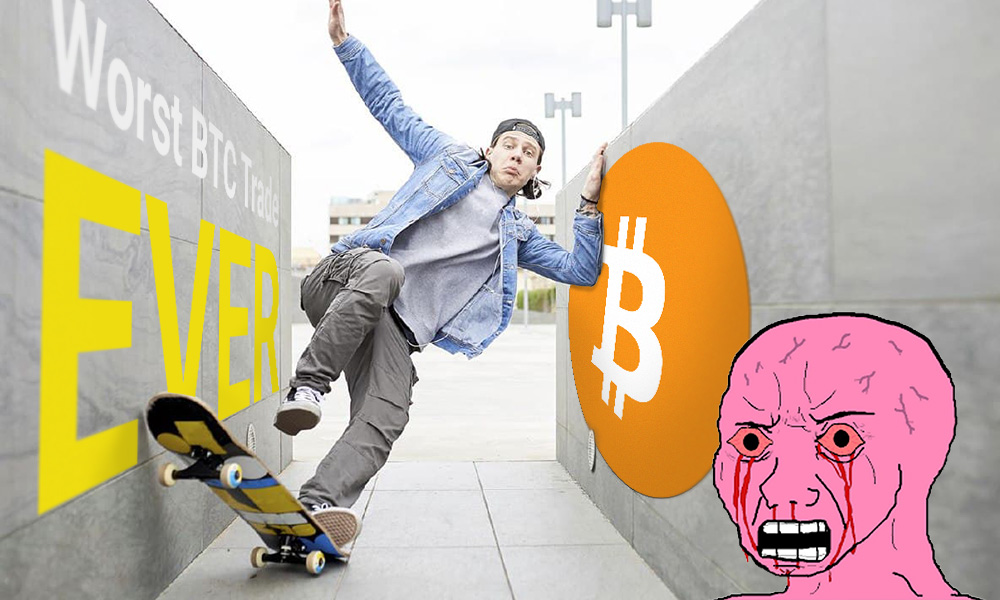 Traders keep questioning themselves. Their skills. Their experience. Name it all. It’s only natural; an assessment of one’s competency.

The trouble is, sometimes blind self-confidence can be perilous in trading.

Regardless of the market.

The “Easiest Short of Our Lives”

And it is exactly what happened to one trader on Trading View.

Boasting that he was ready for a kill, he posted an analysis suggesting a reversal of Bitcoin prices in early September. What’s funny is that instead of leaving room for interpretation, he was so sure of a correction.

The title of his post? “THE EASIEST SHORT OF OUR LIVES”

He may have been right, but for a second!

Bitcoin prices had earlier on rallied to over $12,500, blasting past February 2020 highs, and bulls looked “exhausted.” His technical indicators—a blend of stochastic, RSI, and EMA Ribbon, pointed to bears.

Specifically, a conspicuous bear bar had broken below the EMA Ribbon, confirming a distribution of mid-August. Better still, coinciding with the double bar bear reversal of Aug 17 and 18, the stochastic indicator had printed a “sell” signal while the RSI was overbought.

Indeed, a combination of all these meant a Bitcoin correction was imminent justifying his confidence.

A Nightmarish Trading Decision, The Worst Ever

Only that it wasn’t and it turned out to be a grave mistake.

Bitcoin prices rapidly moved against his prediction, racing to $19k in weeks.

The trader sold at around $10,650, just when Bitcoin bulls were getting primed.

At the time of writing (Dec 2), the Bitcoin price is above $19,800, printing new all-time highs in some exchanges.

Better still, analysts expect more gains in the coming days considering the state of the global economy and the inevitable inflation.

Confidence in crypto trading can be easily squashed. Affecting the morale of any trader. As it turned out, the trader’s confidence was shredded and his position became a financial nightmare.

But The Warning Was There…

Before the heavy loss, there were tell-tale signs that the Bitcoin price was just getting started. That the rubber was about to hit the road and the bulls were ready to raise their tails.

First off, right after he posted the trade, other traders thought his entry was too early.

However, the trader was more upbeat and fixated about the impending “price crash” since, in his view, previous circles pan out just the same.

All he could see was blood on the street:

“…its all about speculations and they ain’t accurate. What i show with this chart is the similarities it has before the big crash in price. when we see a repeat of history its over for bulls. it looks very similar. also the stock market is falling slowly a bigger crash there will trigger BTC as well to crash IMO. we will see how this plays out but i expect bleed on street.”

The Loss and the Humiliation

Fast-forward and two months down the line, the trader is deep in losses assuming he shorted and failed to cut losses.

He’s now being mocked and laughed at for his costly decisions.

The thing with trading is that no one cares as long as you make money. Trading is more of an art. It takes time and guts are needed to make confident calls.

Coincidentally, herding is common in trading circles and he wasn’t alone.

While he made his calls public, others exited the markets privately but can’t help but remind themselves of the mistakes they made:

Worse, for broadcasting their trading decisions, others have been trolled on an epic level–by Blockfolio:

Sir, the price of Bitcoin is up 60% since you sold.

Feels humiliating, like Satoshi himself taking a jab–for just one of your mistakes, to make a point, before melting back to the digital ether.

Regardless, it may point a thing or two about technical analysis as a tool for making price predictions.

Is Technical Analysis Worth it in Bitcoin and Crypto Trading?

First off, is it worth it? Why not just buy and HODL.

For starters, crypto is different from the stock or Forex market in the sense that its markets are mostly unregulated. The absence of binding rules, especially for most ramps, leaves room for manipulation.

However, this is not to say all ramps are rogue. Those in the United States, for instance, abide by the rules and have channels for fiat trading.

On the other hand, most exchanges without fiat support are “actively skirting the law.” Regulators have been cracking down on them for their lack of compliance claiming they are agents of money laundering and, you guessed it right, tax evasion.

With manipulation–in a scene operating like the Wild West, historical data–that’s the backbone of technical analysts, can be unreliable. There have been instances where manipulators boast of their willful pump-and-dump schemes in a comparatively thin market.

There is evidence from the third Ethereum Classic (ETC) 51 percent attack. Ordinarily, market forces would have drastically slashed the valuation of the Ethereum fork. However, prices didn’t dump, leading many to question and confirm the possibility of market manipulation.

Also, Ripple, the for-profit company behind XRP, was accused by holders of suppressing the prices of the token. The token is for liquidity.

– Most in #XRPCommunity believe the price is being manipulated by Ripple

– @JoelKatz said XRP must be valued higher for utility

Before that, Brad Garlinghouse and his team were complicit in allowing partners to purchase directly from their coffers, keeping prices low. Heeding complaints, Ripple no longer allows the programmatic sale of XRP, and partners have to buy from the open market.

There are many other instances of manipulation claims.

Nonetheless, whether there is manipulation in Bitcoin or not, calls for due diligence from analysts. Several factors influence price even if the technical charts are ideally a representation of all an efficient market, crypto is at a nascent stage, and Bitcoin is evolving. Combined, it can render projections solely based on technical analysis worthless.

Still, this is not to say Technical Analysis doesn’t work or is it “nonsense”. Trading using charts can is profitable. In fact, there are technical analysts who are millionaires because of their art.

Technical Analysis is more of an art, not science from an instruction book.

BTC Recovers, but Will $20k Stand?