Polkadot promises interoperability, scalability, and speed. These are the project’s primary value proposition.

Even so, there are potentially lucrative opportunities for those plugging in late since Polkadot is still a work in progress.

According to analysts, DOT is still grossly undervalued—providing an opportunity for the savvy.

Remember, as of today, Polkadot is yet to activate Parachain Auctions.

From a top-down approach, there is little doubt on the uptrend.

There were understandable scares last week, which saw prices dump. Still, the recovery of September 22 may be hinting, indicating a slow down in the selling pressure.

Nonetheless, without keeping heads in the sand and being blinded by optimism, there is a worrying double bar bear reversal pattern in the weekly chart despite gains of the last 24 hours.

Therefore, if anything, the odds of lower lows could still be on the cards. 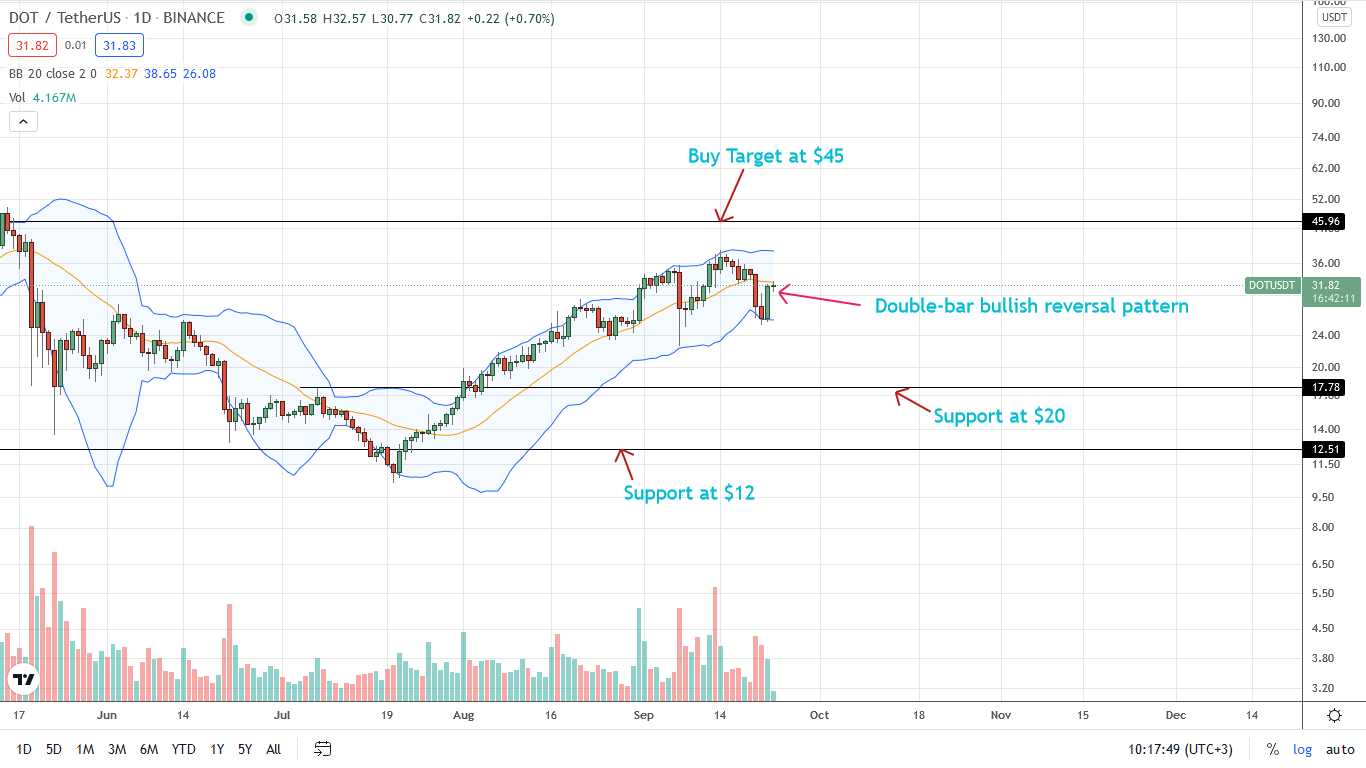 Moreover, the DOT price action is still below the 20-day moving average—the dynamic line which sellers broke on September 20 while confirming losses of September 7.

Therefore, Polkadot traders can look up, but the only time when confidence will flow–confirming the strength of DOT buyers–comes later.

Specifically, a rally above September 2021 highs and $40 would invalidate the worrying lower lows—relative to May 2021 highs–igniting demand and a new phase for DOT buyers.

From the Polkadot price action in the daily chart, DOT prices are reversing from a clear support zone.

In this case, therefore, one trader thinks the coin would tear higher above September 2021 highs of $40 to $48 in short to medium term.

Coincidentally, the support zone where Polkadot is now rising from also flashes with June 2021 highs. Accordingly, it only cements the uptrend, making opportunities at spot levels attractive for risk-off traders truly believing in Polkadot’s potential.

On the flip side, the trader also warns of possible bear trend continuation if there is an unexpected dump down below this level of support. In that case, DOT may crater towards $19, mirroring losses of September 20.

The same preview is maintained by yet another trader who thinks at spot rates, long-term HODLers can accumulate DOT.

Great point to add this for long term. pic.twitter.com/iQT6PdLGLD

Notably, from the daily chart, Polkadot prices are reversing from June 2021 highs, as mentioned earlier, in a retest after the retracement from September highs.

A Deeper Correction for Polkadot?

That’s what at least one trader predicted, expecting a dump to $19 based on the Elliot Wave formation analysis.

From the daily chart, it is clear that sellers are giving up despite the high-volume deleveraging early this week.

DOT bulls are not yet out of the woods since September 22 bull bar is with lighter trading volumes.

Therefore, if DOT slips, it may drop to $19 in a 1-2-3-4-5 Elliot Wave formation before finding support and springing back towards all-time highs.