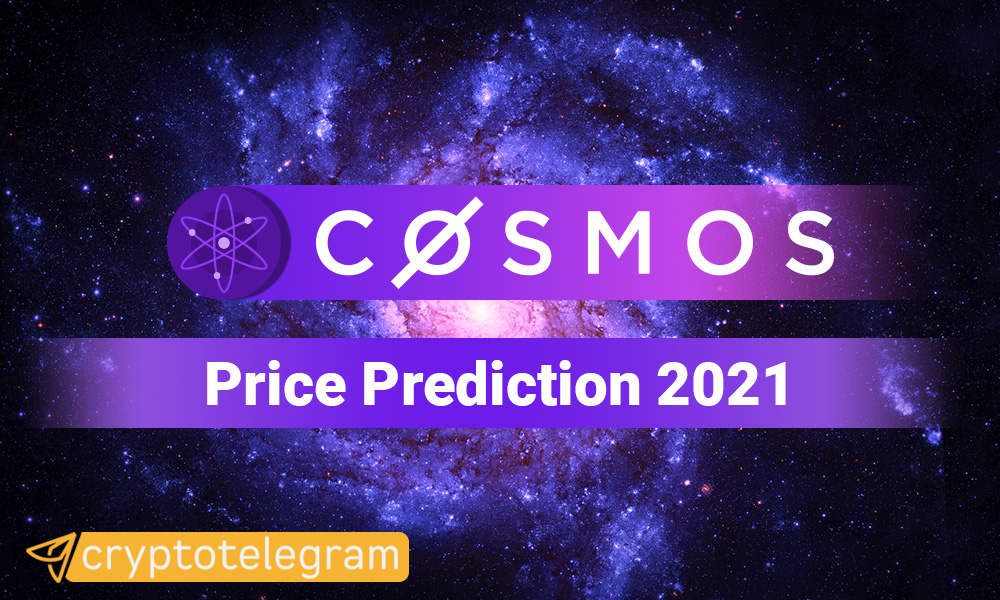 Blockchain is an evolution, and Cosmos (ATOM) a prime example gauged by investors, eager to know the Cosmos price prediction for 2021.

Even with the launch of the first blockchain (Bitcoin) becoming an instant success, the crypto community has been yearning for more and better protocols.

This desire keeps increasing, especially with the rise of smart contracting, tokenization, and democratization of finance.

Specifically, the rise of decentralized finance (DeFi) exceeding expectations and now heralding the need for interconnection between blockchain brings to the fore the necessity of enabling agents.

Subsequently, Cosmos is walking the talk and ready to achieve its core objective. The native token of the Cosmos project is ATOM, the subject of this price prediction piece.

However, ATOM’s success largely depends on the project, its ability to meet timelines, adoption speeds, and the pace of innovation.

Therefore, to better understand the various factors that may affect the Cosmos (ATOM) price prediction for 2021, users must have a thorough understanding of Cosmos.

What is Cosmos (ATOM) Solving?

Cosmos (ATOM) is desirous of solving a pressing problem.

Here’s what it is: Ethereum, Cardano, Bitcoin, Tron, EOS, and the list goes on, exist as islands. Their respective native tokens exist in their ecosystem, useful in, among many other things, paying fees.

In other words, a solution is needed, especially if blockchain as a disruptive and global phenomenon is to be successful.

Simply put, these walls should not exist for better interconnection and interoperability. After all, most of these smart contracting platforms like Ethereum and Tron, for instance, target the same clientele. Both have vibrant sub-sectors—Tron is famous for gaming while Ethereum is known for DeFi, and there ought to be intermingling and exchange of ideas.

In the same vein, developers of Cosmos (ATOM) are putting forth and have actualized a solution that will ultimately roll out a web of decentralized and interconnected blockchains. The benefit is that developers will have more time to improve.

Interestingly, the Cosmos (ATOM) project even allows individual blockchain to tap on others’ functionalities for improvement of their usability.

Besides, suppose the blockchain and DLT sector exists as it is, it becomes tough for legislators to create bills and even pass laws that will help the industry flourish.

What is the Cosmos Blockchain?

In their most basic term, the Cosmos protocol is described as an “internet of blockchains.”

These individual blockchains (called zones) will be brought together for interoperability via a set of open-source tools that streamlines transactions between them.

Tethering them is the Cosmos Hub that maintains each zone’s record and is technically the first blockchain to launch. Its core is the Inter-Blockchain Communication protocol (IBC).

Above all, the core objective of Cosmos is interoperability and customizability since users of each of these interconnected blockchains might have varying needs, each requiring specific fixes for seamless operations.

Right off the bat, this presents innumerable advantages for developers who are split, halted by the inability of interoperability in the current isolated blockchain system.

Notably, what sets Cosmos apart is its goal of fostering the growth of a functional, decentralized, and secure ecosystem. Herein, data and tokens are shared programmatically without third-party intervention.

Additionally, while projects are rooted, there is added flexibility of governance. Each can choose a fitting model of their choice.

At full throttle, the Cosmos protocol will comprise of three main layers:

A Brief History of Cosmos (ATOM)

The creators of Cosmos are Jae Kwon, Zarko Milosevic, and Ethan Buchman.

Their fundraiser—not a typical ICO, via the InterChain Foundation (ICF)—a Swiss non-profit, in April 2017 only took 29 minutes for their crowdfunding hard cap target of $17 million to be reached. After initial trials, the project’s mainnet launched in early 2019.

In the early days of Cosmos, Tendermint was in charge of development. However, the network has since decentralized with a strong team of developers behind the Cosmos Network, launching projects.

Behind the creation of the Inter-Blockchain Communication are Agoric Systems Operating Company and Tendermint.

Right from the very beginning, Jae Kwon and the team say that ATOM coins are agents enabling entry and participation in the vibrant Cosmos ecosystem. Notably, even after launch, funds were not used for marketing purposes. It is despite rumors that Binance—operating as a network validator, asked for a listing fee for ATOM support.

Roles of the ATOM Coin

Priming the Cosmos blockchain is the ATOM token. The coin is distinct from the foundation and is not a utility as aforementioned.

In a Proof-of-Stake consensus, algorithm tokens are useful in staking. Validators must lock the coin for transaction validation and earning annual yields. Only the top-100 validators are eligible to secure the Cosmos network and validate transactions. Users can delegate their tokens to leading validators and earn a share of rewards.

Accordingly, the more validators, the more secure Cosmos is. This way, it becomes easier to deter spamming attacks.  It becomes economically infeasible for attackers to attempt such an attack.

Furthermore, interoperability would be futile if not for ATOM. The coin facilitates the transfer of value, sharing of information, and general tokenization operations. Holders can also participate in governance through voting.

As a result, the easiest route is to purchase the token from leading cryptocurrency exchanges for those who want to acquire ATOM. By Q1 2021, there were over 65 markets for ATOM. Most of the coin’s trading is at Binance—pairing is versus Bitcoin, ETH, USDT, and more, and Coinbase Pro—where users can purchase the token using cash.

The ATOM price was trading at around $19 in early March 2021. However, for what the project seeks to achieve and being one of the leaders advocating and laying down practical solutions, analysts are optimistic. Furthermore,  spurring demand for the interoperability coin and solidifying the bullish prognosis of the ATOM price prediction for 2021 is the launch of the IBC.

It is now easier for blockchains to link with the hub leading to higher efficiency and wholesome growth of the ecosystem. It is precisely what blockchain needs for now: A unification for stronger growth and adoption.

Advancement through unison means a more practical, transparent, beneficial, and symbiotic ecosystem of solutions useful for the ordinary and corporate user.

Using algorithms, GOV.Capital predicts the ATOM price to reach $37 by the end of the year. This is nearly double ATOM prices of early 2021.

Citing strong adoption of ATOM and the Cosmos project by the end of the year, the ATOM/USD price may nearly triple to $51 by December 2021.

The price prediction platform accesses that the lowest price ATOM could register in the future is $79. In the medium term, though, the ATOM/USD price will rise to $31. Accordingly, Cosmos is a good investment in their analysis.

Furthermore, holding to what other prediction platforms suggest, Wallet Investor’s combination of fundamentals and technical analysis forecast the ATOM price to reach $30 by the end of 2021. Wallet Investor classifies ATOM’s investment as outstanding and could reach $78 by 2026.

Away from bots relying on technical analysis, YouTubers—active crypto followers, are equally bullish.

According to Craig Beck, the ATOM price can reach $50 by the end of the year:

On the other hand, BitBoy thinks ATOM may reach $140 in the coming Bull Run, closing its gap with Polkadot:

Similarly, Crypto Bull opines that Cosmos (ATOM) is undervalued. It is a working project with a strong backing. With more demands for interoperability, ATOM prices can reach $100:

Analysts are excited about the IBC, Cosmos’ customizability, and the fact that ATOM might rise with the crypto tide. Thus, one Twitter user thinks the ATOM/USD price will reach $180 by Dec 2021:

Furthermore, with relatively fewer coins, user demands for interconnection, and Cosmos being a working project, one thinks ATOM will fall between $500 and $750 by the end of the year:

Furthermore, another, in their Cosmos Price Forecast for 2021, opines that ATOM could reach $100:

In summary, this Cosmos (ATOM) price prediction for the 2021 article merges different factors and opinions from community members. Accordingly, most traders are bullish on ATOM price, given its relatively low coin circulation and the activation of the IBC.

Therefore, the increasing calls for blockchain interoperability and customization may provide tailwinds for the ATOM/USD pair. Analysts and prediction sites say the coin may reach between $40 and $150 by the end of the year.

Therefore, based on these Cosmos (ATOM) price predictions, the ATOM/USDT price could easily register anywhere from a 2X to a 5X from early 2021 rates.

Still, investors should do their due diligence and research for a clearer understanding of the project’s inner workings.