Cardano is a sound, peer-reviewed project.

Nonetheless, the only consistent thing about ADA at spot rates is its downtrend.

Cardano has nothing but becomes an underwhelming project that holds so much promise—maybe not now considering its dynamics—mostly leaning on its fundamentals.

When going to press, ADAUSDT prices are trending inside a narrow trade range defined by the bear bars of November 16 and 18.

Notably, ADA prices are trending below $2 in a bear breakout pattern below a critical support line inside a descending channel.

This, technically, is supportive of bears and signals strong participation from sellers. 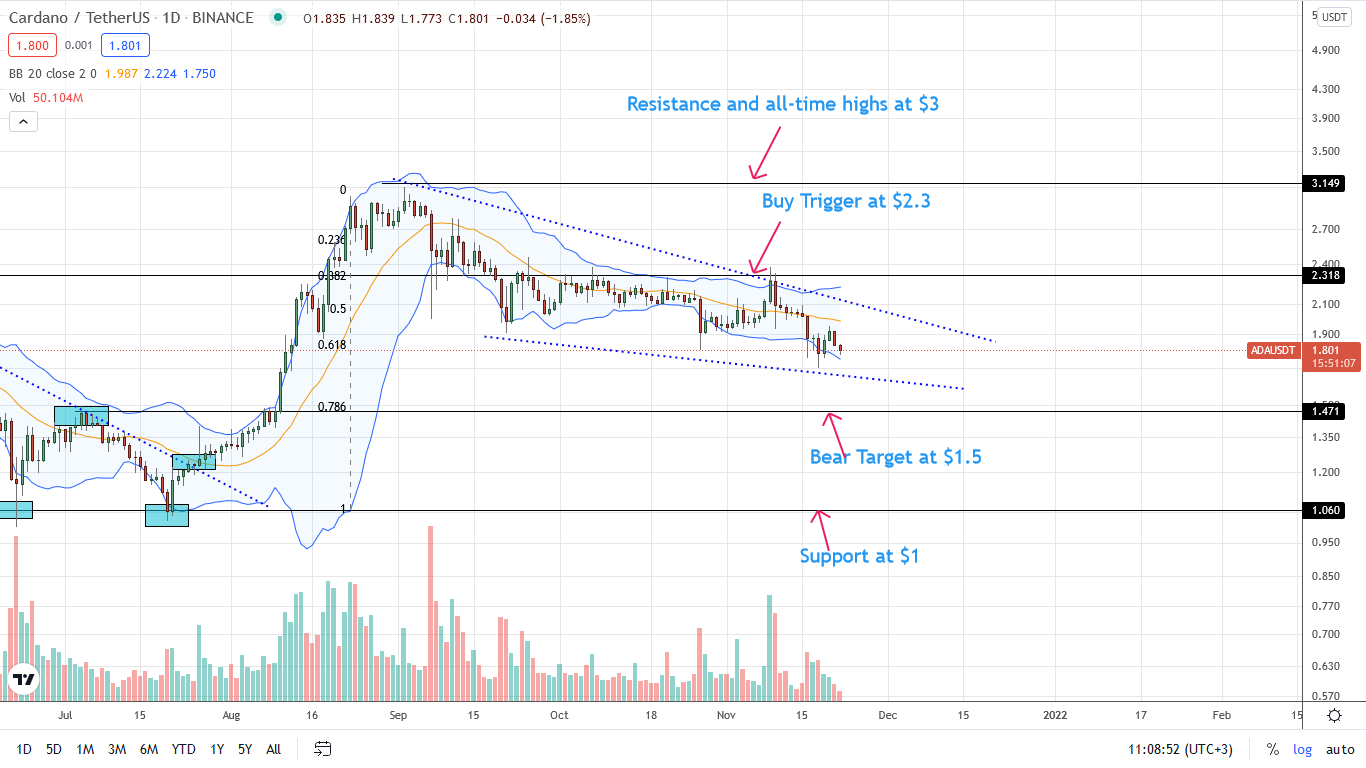 As from previous ADA technical analysis, Cardano bulls must break above important resistance levels at $2 and later $2.3 with increasing, above-average trade volumes for trend continuation—reflecting the strong upsurge of early Q3 2021.

If the trend persists to be southwards, every high, therefore, may offer entries for ADA bears keen on liquidating with targets at $1.5—the 78.6 percent Fibonacci retracement level of the Q3 2021 trade range.

Being on the bright side, if buyers build on the higher highs of the weekend, rising relative to the lower BB, the odds of further expansion above $2 and the middle BB would be high.

Noticeably, ADAUSDT prices are capped by the November 16 and 18 bars below the middle BB and $2—a round number. The recent sideways movement may offer a base for a higher retracement, signaling strength that should be welcomed in a predominantly bearish coin.

On Twitter, ADA prices are on the 200-day moving average, finding support at the dynamic support line.

According to the analyst, ADAUSDT prices are “resting” and re-testing the support line is an indicator of strength.

#Cardano $ADA sits right at the 200 day moving average. In bullmarkets price always tests this range from time to time. It's time to move up again. All kinds of other technical indicators look bullish too and the fundamentals are better than ever! Bears are fucked. We win! pic.twitter.com/T5qWZvnFON

Chartists use the indicator as a guide to define bullish and bearish positions. Since ADA prices are above the line, it can be said buyers have the upper hand.

It will be imperative for ADA bulls to resist bears and keep prices above the line in the days ahead. A break below this line could trigger a sell-off.

As mentioned earlier, the first level of support and bear target is $1.5.

Zooming to the 4HR chart, one trader expects a breakout.

Looks close to a breakout after steady consolidation

However, the direction is indeterminate at the moment, factoring that prices aren’t near any reaction level. From the 4HR chart, ADAUSDT prices are inside a pennant.

Since buyers have a clear lead from a top-down view, a close above $2 and the resistance trend line of the bull flag would usher in another possible leg up.

On the flip side, losses below the critical support line—and by extension the 200-day moving average in the daily chart—may see ADAUSDT drop towards $1.50 in the short term.

On the ADABTC chart, an analyst on YouTube is bullish on Cardano’s prospects.

He agrees that Cardano’s leg up isn’t be a factor of Bitcoin. It is because the project has unique fundamental events divergent from Bitcoin’s.

In the daily chart, the presence of the bullish divergence pattern is a sufficient indicator of strength. Subsequently, there is a high probability of a move up above the descending wedge. This will be in continuation of early July 2021 gains versus BTC.

Bitcoin “Hanging On”, Are HODLers Buying the Dips Above $55k?