Bitcoin, Elon Musk, and Tesla, for a moment, seemed to be best buddies.

How about that bromance, invest $1.5 billion to maximize yield, and even accept some BTC for Tesla products.

At one time, Bitcoin and crypto proponents said it was a partnership in heaven. A deal that once and for all extinguishes all the bad rap about BTC not being money.

The problem is, Tesla is a public company, Elon, a “crazy” scientist, and the world wants green—yes, the Paris Agreement.

The marriage faced a lot of headwinds, criticism, and eventually, Tesla said enough was enough.

After heavy pelting, they backtracked on May 12, saying they will cease accepting Bitcoin for payment. Delivering the sucker punch was none other than Elon Musk.

And here’s the bummer, Bitcoin, he said, is energy inefficient.

For this, they are looking to work with similar projects but which are more energy-efficient.

Still, the love is not lost.

Tesla isn’t selling Bitcoin—remember they hold some $1.5 billion worth of the coin and more from their car sales.

What’s more? Tesla loves the idea of cryptocurrencies and holds that they hold a very promising future. The stash in their possession, they add, will be used to facilitate future transactions.

To be clear, I strongly believe in crypto, but it can’t drive a massive increase in fossil fuel use, especially coal

If anything, their indictment is both hot and cold.

ANNUAL #BITCOIN LAYER TWO ENERGY USAGE IS EQUIVALENT TO THAT OF ONE TESLA SUPERCHARGE.

Bitcoin crashed 18 percent, but it would do just fine. BTC miners use renewable energy sources, green energy, and are receiving heavy investment as such.

On the other hand, Bitcoin traders sense this as a loading opportunity.

Leading the back is MicroStrategy, which assuaged fears by doubling down, adding another $15 million on May 13.

Bitcoin is Bullish above $45k

For this—and much more, traders across all social media platforms and forums are confident.

Take, for example, ForecastCity_World on Trading View. The analyst holds that BTC/USD will bounce back cleanly from the current shock to register gains above $60k.

This, he adds with caution, is provided $45k holds. It is a nifty thing to do, considering the possibility of corrections after solid gains in the past eight months or so.

His immediate targets are stacked between $54k to around $65k.

Coincidentally, his analysis also syncs with CryptoPatel‘s position. First off, he is bullish, expecting a solid bounce towards $55k and $60k in the immediate term. 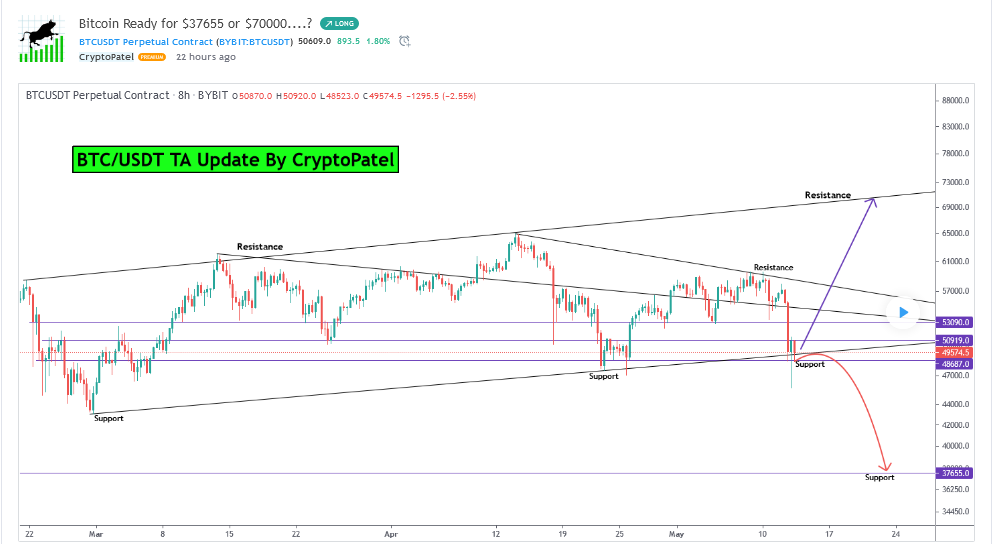 Optimistic as he may, the analyst is aware of the current FUD around the innumerably debunked energy troubles with BTC.

If this level caves and bears take charge, his BTC/USDT technical analysis suggests a possibility of prices tanking below $40k.

Meanwhile, on Twitter, Bitcoin analysts are equally confident. A lot of commentary about Elon and how he “messed” beautiful long setups.

Notwithstanding the dip, NebraskanGooner is convinced Bitcoin still has the legs for $70k and $100k in the coming months. In his assessment, the Bitcoin uptrend is valid even if prices range between $40k and $50k.

There are decent loading zones between $51k and $52k but even sweeter buying opportunities between $38k and $42k. Traders should note that the latter is January 2021 highs–a critical reaction point that could shape the medium term’s BTC/USD price action.

In YouTube, CoinsKid projects the Bitcoin price to enter a protracted period of horizontal consolidation.

After cratering from $64k, breaking below a critical support trend line in the 4HR-chart, the BTC/USDT price could, in the medium term, crash to $43k in the current bearish divergence pattern.

He adds that the correction won’t be bad because BTC/USD would possibly race to over $200k.

Related Topics:BitcoinElon Musk
Up Next

Cardano Adds 18%, Will ADA Bulls Breach $2 Due to Smart Contracts?