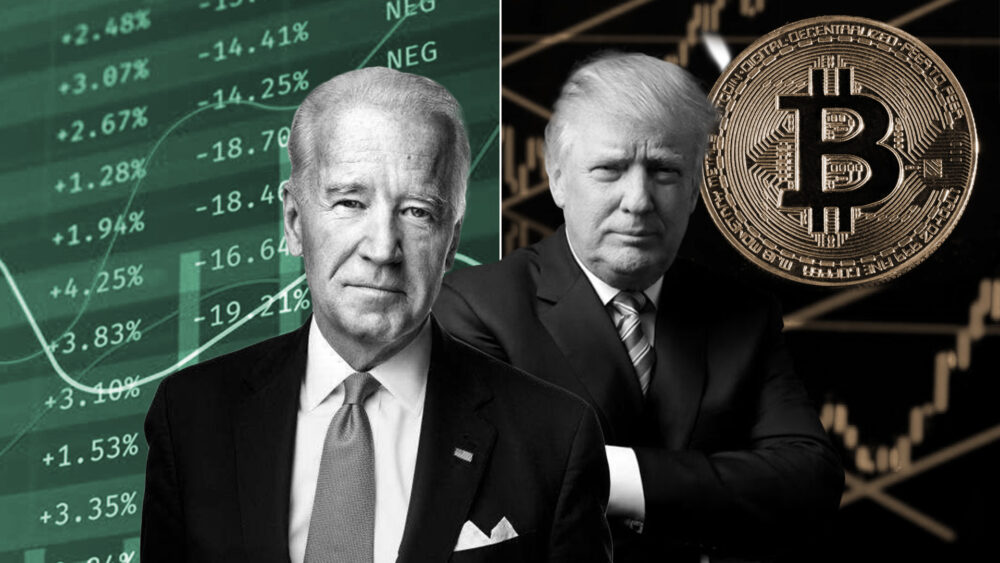 Bitcoin blew past all major resistances, escaped its correlation with the stock market, and even reached a price level that was last seen in June 2019. Bulls have clearly shown their dominance and it is as if almost nothing can stop them. But will the leading cryptocurrency withstand the influence and results of today’s U.S. Presidential election?

Both Donald Trump and Joe Biden are deemed to have a high chance to win. More than that, experts now believe that both candidates will have a positive effect on the stock market. But how will the now uncorrelated Bitcoin react, if it even does? Do whales favor a certain candidate?

The ongoing narrative shows that the uncertainty surrounding the future stimulus bill has put all markets on hold, and the U.S. election results may just show how the situation may play out.

The Context – How Bitcoin fared with uncertainty so far

Stocks have been crashing since the second week of October as a result of new uncertainty regarding both the stimulus bill and the results of 2020’s presidential elections. For example, the SPX index did not even manage to tap its all-time high of 3588. Instead, it dropped straight to 3234 after reaching a local high of 3540 on October 12. The reason? Trump delayed the new financial incentives, which would only take place after the end of the election.

Bitcoin effectively paid no heed to the turn of events, ranging between $11.2k and $11.7k before ultimately skyrocketing on October 21 and printing a $1,000 candle. A narrative that pushes that institutional investors have bought every Bitcoin dip supported this positive price action, combined with news of companies such as Twitter, MicroStrategy, PayPal, and Grayscale investing. In the end, Bitcoin managed to reach $14k but has failed to flip it into support. Will bulls succeed at a second attempt?

How Would a Donald Trump Win Impact Bitcoin?

Stock investors have always favored Donald Trump. The same is applicable in the case of Bitcoin bulls, despite Trump’s bearish tweets regarding digital assets. If he were to be reelected for a second term, it is quite certain that the market would go for another run, similar to 2016. 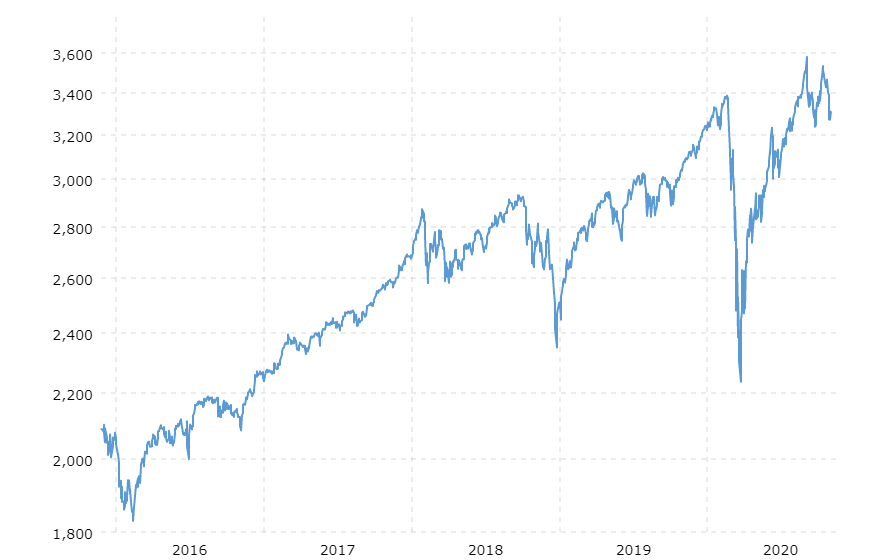 This is especially the case considering that Trump seeks to implement a new stimulus bill right after the election, which if passed would positively affect all markets. Naturally, this includes Bitcoin as well. Once passed, it would be entirely possible for the number one cryptocurrency to reclaim $14k and go towards older highs. Higher timeframes such as the monthly show no significant resistances besides the January high of 17000 and December high of 19600.

In 2020, the Republican candidate has shown that he focuses on the economy first. This stance may resume despite an ongoing third wave of the coronavirus. Donald Trump has recently severely criticized European lockdown measures and has sparked fear that Biden would introduce similar courses of action if elected.

In this case, we could see positive effects for Bitcoin and the rest of the economy if Trump wins, considering his dismissal of future lockdowns. After all, we have seen how the measures have affected the entire global economy in March. In fact, this election result would prove itself to be far more reactive, given that it would continue Trump’s existing performance for the last four years for yet another run.

The Administration’s Interest in a Digital Dollar

Aside from the strong positive reaction in the short-term, we may see an equal effect in the long-term as well. Recently, the Trump administration revealed that it placed distributed ledger technologies (DLT) at the forefront of its ‘critical and emerging technologies.’ This has happened only a week before Jerome Powell spoke about the digital dollar at an IMF virtual panel. There, the U.S. Federal Reserve Chairman revealed that “it is more important for the United States to get it right than it is to be first.”

China had major success with its digital yuan and has already processed more than 4 million transactions. Rumors indicate that the People’s Bank of China plans to finally launch the digital currency in 2021, will the U.S. start developing its own by then?

Whatever the case and timeframe may be, one thing is certain. Trump will surely focus on being on-par with China by starting to develop a digital dollar next year.

How Would a Joe Biden Win Impact Bitcoin?

On the other hand, Joe Biden is a candidate who acts as an unpredictable factor. He has years of experience as a U.S. senator behind his back. Despite this, his career as the President of the United States remains incredibly uncertain. However, major groups have already vouched for the candidate and his potentially positive impact on the economy.

For example, the chief economist at Goldman Sachs recently disclosed that a ‘blue wave’ is more likely to happen and that it could pump both the U.S. and global economy far higher.

Goldman Sachs’ Jan Hatziues notes that the Democratic candidate would indeed increase corporate taxes, but that a stimulus package launched after his inauguration would severely outweigh the effects.

Specifically, Hatziues stated that the stimulus package would be worth at least $2 trillion and that it would force Goldman Sachs to upgrade its forecasts. Furthermore, successful spendings in various areas such as infrastructure, climate, health care, and education would equally match the long-term tax increases on corporations.

Another important thing to note is that the chief economist stated that this outcome would lead to a ‘substantially easier US fiscal policy, reduced risk of renewed trade escalation, and a firmer global growth outlook. We can conclude that such an outcome would completely remove all uncertainty, which all markets immensely hate.

In the case of Biden winning, bulls would show their dominance just as with Trump. However, the key difference is that markets would react on a different timeframe. Bitcoin would not respond positively instantly to the news of Biden winning. In fact, there might even be a pullback if whales have expected Trump to win. However, bulls would continue to push Bitcoin upwards, especially if Biden really does confirm a stimulus bill for inauguration day.

Bulls to Push Despite Biden Winning; Unless He Quarantines the U.S.

However, the fear of Biden introducing lockdowns has the potential to ruin all bullish plans. As previously mentioned, quarantines can only negatively impact the economy. If introduced, they would force Bitcoin to test support at $11.5k, if not lower. If it lasted longer than the first quarantine, we could far harsher effects. After all, the March crash has temporarily ruined the global economy. Bitcoin did not have fun either, as it crashed down to its December 2018 lows. 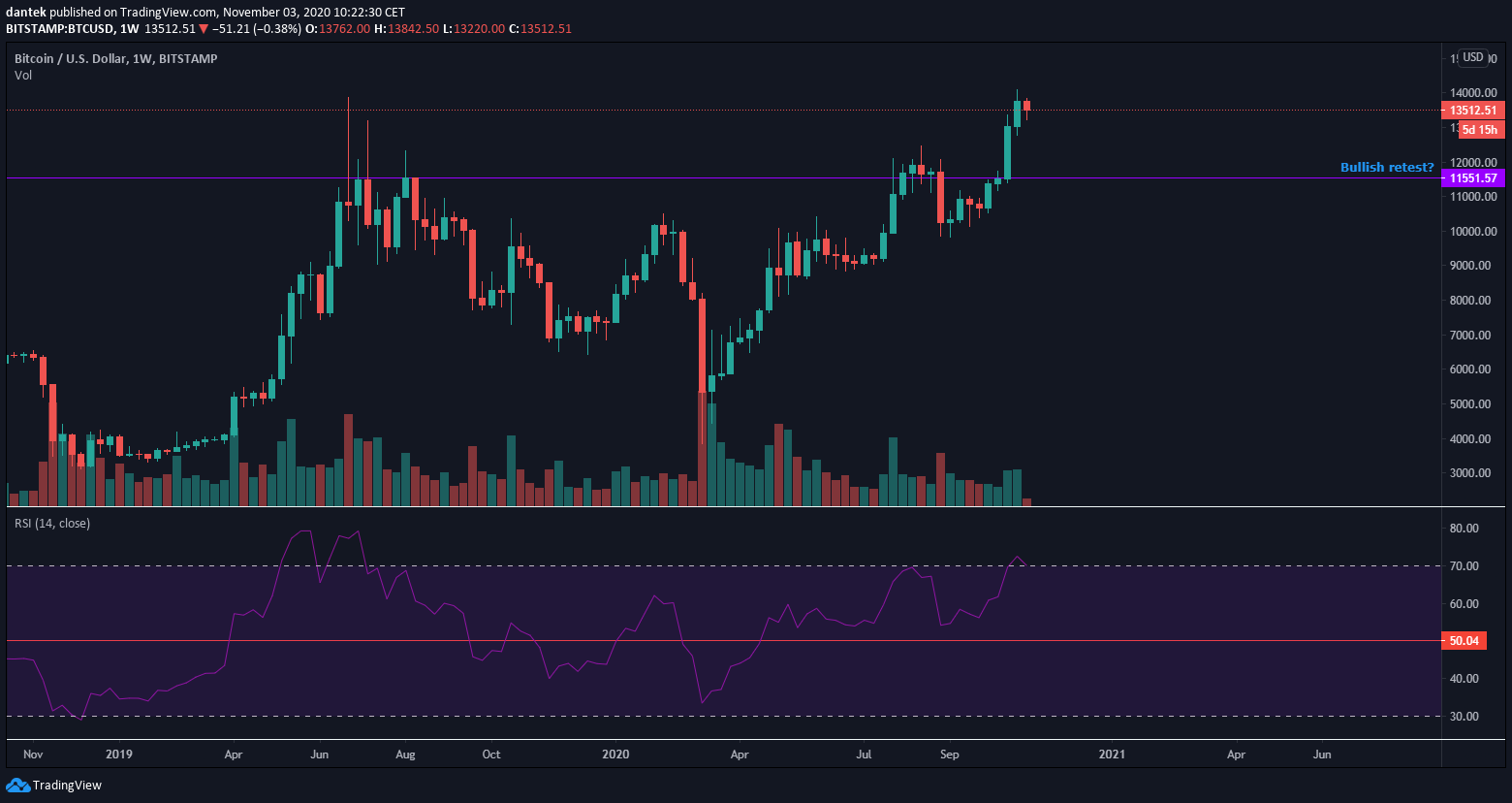 Nevertheless, the results of these measures have the potential to only be seen at a later date. For instance, this could happen upon the release of a quarterly report. On that account, a more significant pullback may only happen at some point in the future. For now, Bitcoin will most likely act calmer than we think with a Biden win.

Experts believe that it is highly likely that both outcomes can only bring positive changes to the economy. As uncertainty settles and the U.S. selects its winner, markets will finally have the time to focus on fundamental value, and not external news. This includes Bitcoin as well, a digital asset that has proved itself to be particularly strong in recent months.

However, we can conclude that these positive outcomes may not occur in the same timeframe. In the case of Donald Trump winning, Bitcoin would react far strongly and instantaneously compared. His candidate represents the ‘unknowable’ and the past four years have already shown what we can expect under Trump’s candidacy.

Biden is another uncertainty for the market, but not for long. His win would probably astonish the markets for a moment. Bitcoin may not move at all, and if it did, a small pullback could be possible. However, that would quickly be reversed as soon as the candidate would start talking about the future stimulus bill. In that case, bulls could resume pushing the market upwards. But that is only possible if we do not see a renewed season of quarantines.

In the end, it becomes clear that it is not that important which candidate wins today. Ultimately, the winner’s policy will decide the fate of the markets. Since everyone seeks a revival of the economy, it is highly unlikely that Trump’s and Biden’s financial policy differs that much. The outcome can only affect when and how strong Bitcoin will react. It appears that a bullish outcome is almost set in stone.

Join our Telegram channel for the latest cryptocurrency news and price analyses.