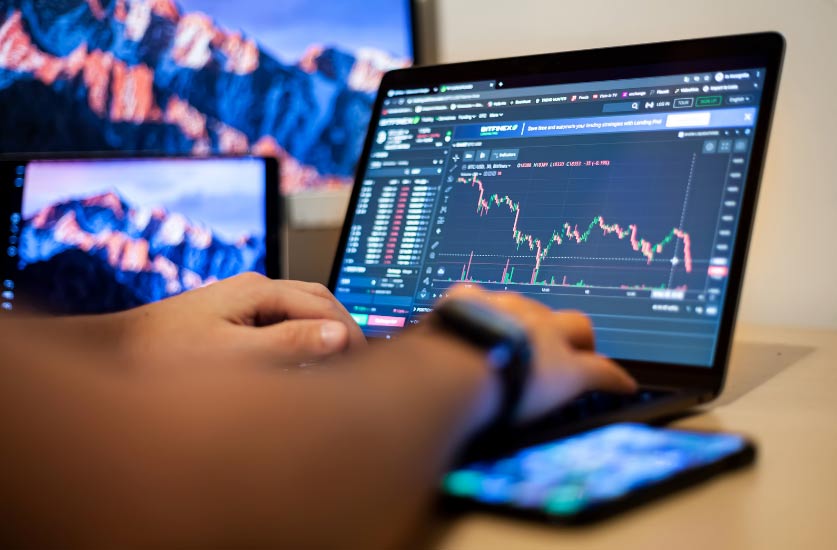 After a steep fall to just below $30,000 in July, Bitcoin price reached $50,000 for the first time in 100 days last month. It was selling at around $50,200 at that time, with a market capitalization approaching $1 trillion but never quite reaching it.

Bitcoin’s market capitalization once again surpassed $1 trillion this week, according to Coinmarketcap. At the time of writing, Bitcoin is currently worth around $54,298.60, with a total market value of just over $1 trillion. 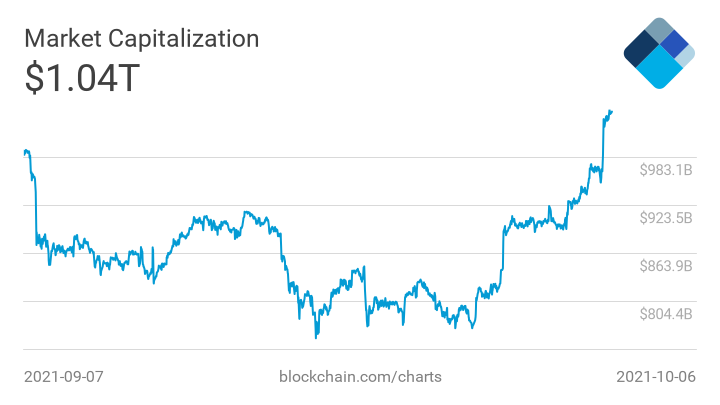 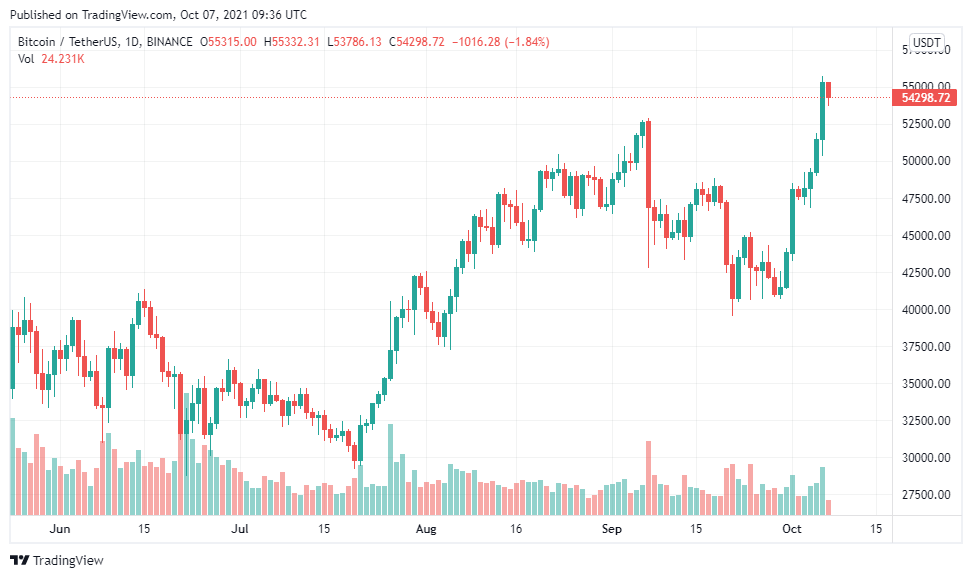 Finally, Bitcoin surged to its highest price in nearly five months on Wednesday. After a difficult September in which Bitcoin struggled to maintain stability for the most part of the month, the cryptocurrency has finally broken through $55,000 for the first time since May, and the market is as jubilant as it is hopeful for what’s next. The price of Bitcoin rose to a peak of $55,172 earlier today, despite the fact that it is currently trading at $54,298.

#bitcoin finishing above it’s ATH would be super positive to keep pushing towards the inevitable.

When Bitcoin’s rapid ascension correction began in October, the price breakout was immediately impending. The bulls were in full swing by late September, and with the new month’s start came a lot of strength, propelling prices to a new monthly high. Although Bitcoin is still 15% below its all-time high in April, the world’s largest cryptocurrency significantly outperformed the market on Wednesday. Ether, Cardano’s ADA, and Binance coin all rose by around 6%, 2%, and 1% over the previous 24 hours, respectively.

U.S. Bank, the country’s fifth-largest bank by assets, announced on Tuesday it has launched a bitcoin custody service to help investment managers store private keys for Bitcoin, Bitcoin Cash, and Litecoin, according to Freddie Evans of digital asset broker GlobalBlock. The announcement, according to Freddie, may have helped contribute to the massive Bitcoin price surge on Wednesday.

The growing popularity of bitcoin has boosted optimism in cryptocurrency markets. Bank of America announced Monday the debut of cryptocurrency research coverage, calling the nascent market “too big to ignore. ”

Furthermore, Senter highlighted Bitcoin’s outperformance among cryptocurrencies as it relates to the growing risk of regulation around other digital assets. The so-called “stablecoins,” whose values are linked to other assets, and tokens connected with the developing decentralized finance (DeFi) industry are two examples.

The analysts also said that while Bitcoin’s volatility is still high, the cryptocurrency appears to be maturing, indicating that it may become more prevalent in investment portfolios. “Current Bitcoin price dynamics appear to be driven by mainstream ownership and increased institutional interest, which may grow as regulatory rules become clearer and investor protections are established,” the analysts added.

The pandemic’s influence drove the Bitcoin price to astronomical highs in the face of inflation concerns and increased institutional adoption. However, prices plummeted in April, when Tesla—one of bitcoin’s largest corporate investors—announced it had sold a big chunk of its assets and wouldn’t acquire any more until bitcoin mining consumed less energy. Since then, the market has struggled to recover amid an increasingly stringent regulatory campaign in China, which is driven in part by similar environmental worries. The world’s cryptocurrencies—which have a combined market value of around $2.4 trillion on Wednesday—are still down about 10% from their all-time high of $2.6 trillion on May 12.

Cardano “Stable” Below $2.5—Are These Ideal Entries to Swing ADA?