In all this, one thing is clear: Traders can sustain prices above $19k, less than $1k shy of the all-time high (even though Bitcoin ATH was hit in some exchanges—Bitstamp and others).

At the time of writing (Dec 2), the Bitcoin price is trading at $19,190, paring losses of last week. It is stable on the last day and week of trading.

There are myriads of factors supportive of Bitcoin at spot rates. From the chart, there is an aura of confidence from traders. Optimism being, a close above $20k could see a Bitcoin price tear towards $21k and even $31k in the medium term.

As it is, that prices are stabilizing above $19k—and bulls drowning out bear attempts to push prices below $18.5k, is just about the right ingredient for further gains—even if marginal, above 2017 highs.

Traders are now watching out reactions at $20k, a psychological level, and the support line at around $16.1k—marking out last week’s low.

If prices consolidate around these levels–at the back of deteriorating macro-economic conditions, Bitcoin prices may rally.

Analysts are bullish on Bitcoin. According to Anthony Pompliano, the co-founder of Morgan Creek Capital, in an interview with CNBC’s Squawk Box, the coin is the winner of supply and demand.

In his assessment, the prevailing economic conditions provide the required “rocket fuel” for gains that will push Bitcoin prices to $100k in a year.

He shares the same opinion as Thomas Fitzpatrick of Citibank. He projects a Bitcoin price rally to $318k by Q4 2021.

Willy Woo, an on-chain analyst, has said he has never been “so bullish.” He adds that the six-digit projection is conservative now that HODLers are unrelenting.

The current market on average paid $7456 for their coins. You all are geniuses. pic.twitter.com/5t1pHXwE0b

All these projections are grand, to say the least. However, considering how rapid the expansion of Bitcoin prices has been in the last two months, the possibility can’t be dismissed.

Behind their confidence is how institutions are increasingly in favor of Bitcoin despite the US SEC’s failure to approve a Bitcoin Exchange Traded Fund (ETF).

Institutions, through Grayscale, are doubling down on cryptocurrencies and looking to allocate part of their liquid capital to Bitcoin. 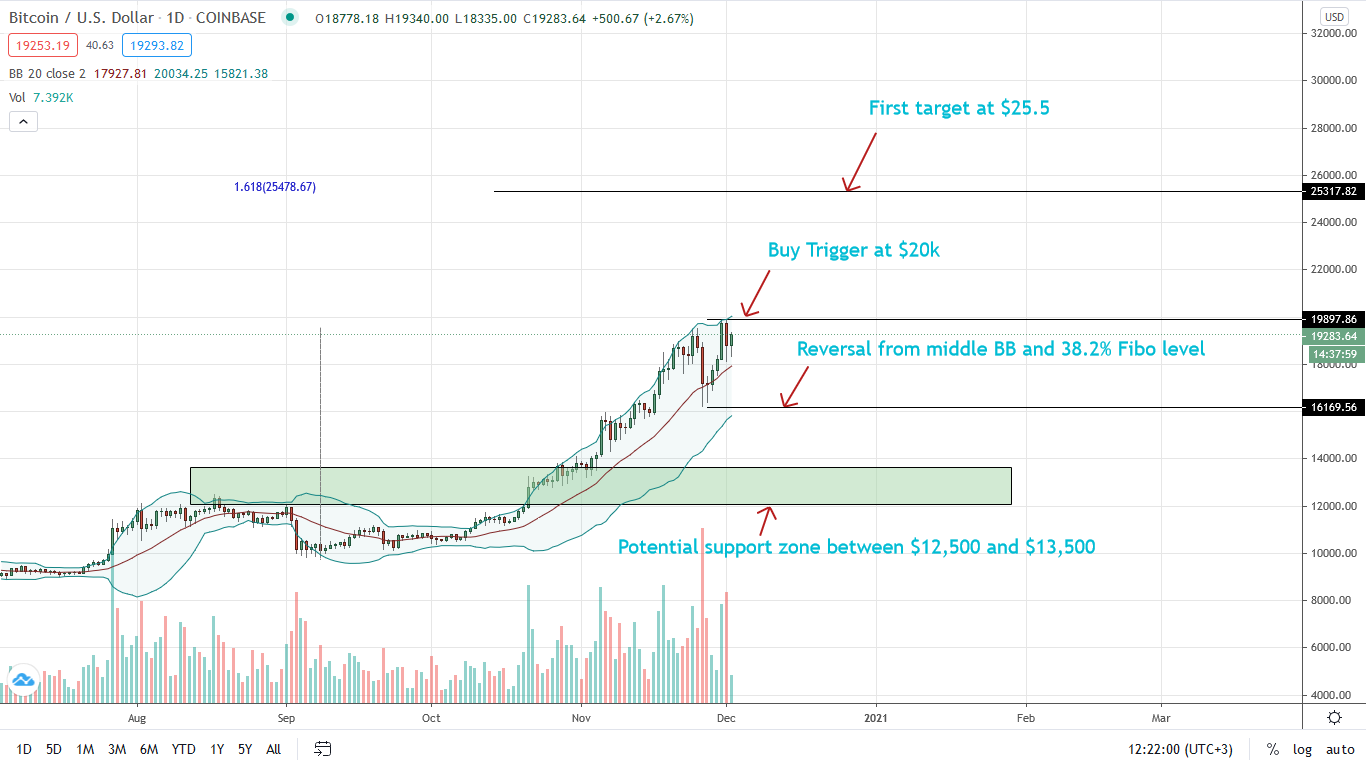 At the time of writing, the Bitcoin price was stable above $19,100.

Notably, bulls have reversed the losses of last week. Then, prices sunk to as low as $16,100 before reversing to spot levels.

However, the failure of buyers to confirm gains from September to November calls for a reassessment of bulls’ prospects. While trading volumes are decent and fundamentals firm supporting buyers ramping up on dips, the uptrend will turn climactic if there is a sharp close above $20k.

The uptrend is firm following the price reversal from the 38.2 percent Fibonacci retracement level. A Fibonacci extension based on the September to November trade range places the immediate buy target at $25.5k.

Disclosure: Opinions Expressed Are Not Investment Advice. Do Your Research.

How The “Easiest Bitcoin Short of Our Lives” Turned Sour

XTZ in a Bullish Breakout Pattern, is $3.5 next?