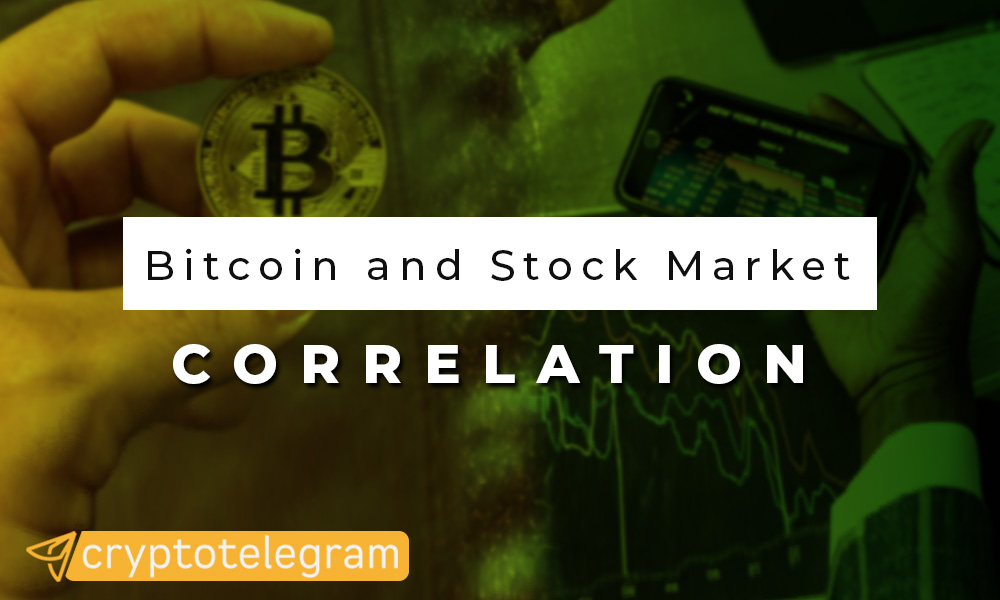 Bitcoin is the king of crypto, no doubt. But is it the world’s? Supporters may say this is the case, adding that it is the best innovation that ever happened in modern-day finance. On the other hand, stock market adherents tend to differ. Everyone, after all, is entitled to their opinion. It is not forgetting that there are crazy Bitcoin comparisons—with avocados being the most hilarious.

The debate is possible because the ecosystem is open. Besides, crypto has no masters to provide guidance. Furthermore, Bitcoin has proven to be an incredibly hard asset to pin down. The digital gold should technically exist as an independent asset without correlations, at least according to Satoshi Nakamoto.

However, we can’t discount the fact that Bitcoin and the stock market correlation—divergent assets—are closely tracked by the community—and sometimes do exist.

There are various reasons why this correlation is tracked—and sometimes yearned for. For instance, the BTC and stock market correlation may influence strategy. For all that there is, we must be clear that correlation (and any other story emerging out of this preview) is based purely on price movements.

The problem is: digital asset prices can sometimes post irrational moves. Mind-boggling moves—it may be because of the hype element. Sentiment as crypto shows directly influences momentum—which traders can mistake for trend.

In all, correlations gauge how an asset performs relative to another in an interconnected global economy. The Bitcoin and SP 500 price movement is measured using a correlation coefficient.

What are the drivers of Bitcoin and stock market Correlation?

Admittedly, the volatile nature of BTC may not bode well with heavy traders or institutions and may tend to revert to stocks especially in bearish markets—moving back to crypto in strong bullish runs.

In some other cases, traders may tap on the Bitcoin and SP 500, NASDAQ, Dow Jones, or Russell 500 correlation to gauge the state of the economy. Remember, these stock indices are traded in some of the world’s leading bourses commanding trillions in valuation.

For the better part of 2020, Bitcoin prices soared at the back of the stock markets that had to directly bear the effects of the global healthcare crisis. Utility stocks suffered while technology stocks like Tesla, more like crypto and Bitcoin, bounced, soaring to new valuation.

The U.S. government is now confident that the global economy will recover and will begin raising interest rates in 2022. At the same time, they will readjust their bond purchasing program. This is the same money that many analysts said was behind the “mooning” Bitcoin prices rising to “safe haven” status.

Now, if the taps are drying up and investors are shifting funds to traditional markets; how will the Bitcoin and stock market correlation be affected? Will this impact the dynamics that have kept technical analysts and fund managers on top for the better part of the last 18 months?

Surprisingly, while the fundamental side of the equation is beginning to change, there is one interesting development in the Bitcoin and SP 500 correlation: Charts show that the correlation ratio is the closest it has even been relative to performance in the past few months.

A Bloomberg article revealed that the BTC—Stock market correlation reading of early December 2021 has been one of the highest in the year.

The syncing price movement of the SP 500 and Bitcoin follows the disheartening simultaneous dump in the stock market whose effects spilled over to the cryptocurrency market. On December 4, 2021, BTC prices tanked below the $50k level to the bottom at around $42.5k—pulling other crypto-assets with it. This was expected, the BTC and Altcoin correlation is high. Therefore when Bitcoin sneezes, altcoins like Litecoin get a cold.

Meanwhile, much cannot be said between the Bitcoin and DXY correlation–which is mostly negative. A roaring greenback, understandably, tends to shred the digital gold.

The Bitcoin and stock market correlation were uncharacteristically high for the better part of 2018 and 2020. This was before the peak in mid-2020—at the height of the coronavirus pandemic. However, even with the high correlation coefficient registered in the tail-end of 2021, Bitcoin appeared to be decoupling from the stock market in the first half of 2021 on risk-off. The primary reason could be that CPI readings across G-7 economies like the United States and the United Kingdom show rising inflationary pressures as they climb out of the throes brought about by the COVID-19 pandemic.

After months of injecting “helicopter money” into the economy, the center is beginning to cave. If anything, the U.K and U.S. economies have to contend with multi-decade inflation values, wiping trillions in purchasing power. Consequently, this has a tendency to force investors towards safe havens. The sell-off in the stock market due to inflation fears would have technically pumped Bitcoin. Instead, prices dropped. Thus far, Bitcoin has pulled back from record highs, dropping over 30 percent. Meanwhile, leading stock indices are down double digits.

Still, looking at the bigger picture and drawing conclusions from multi-year data on Bitcoin and stock market data could be helpful in this situation.

As mentioned earlier, a glance at the three-year data from 2013 to 2020 paints an interesting picture. It aptly summarizes the relationship between Bitcoin and SP 500—and by extension the stock market.

According to data from VanEck, the BTC-SP 500 has been increasing in recent years. In 2020, the stock market’s correlation with Bitcoin stood at 0.22. Although it might not be too high, it points to something even greater. It could indicate that the BTC market is syncing with stocks as its liquidity deepens.

In 2013, the BTC-SP 500 correlation stood at -0.12. Another conclusion drawn from the finding is that Bitcoin and the stock market tend to move more closely during periods of market turbulence and rallies.

When Bitcoin prices tumbled in early December 2021, the stock market wasn’t spared either. This was also experienced in select periods in 2020—mainly in Q1 2020 during Black Thursday. Then asset prices crashed as COVID-19 began spreading.

The good news is that whilst Bitcoin and the stock market move fairly in lockstep during periods of duress, the same correlation is maintained when the market is becoming positive.

What to Make of the Bitcoin and Stock Market Correlation

There are no definitive reasons as to why the expanding Bitcoin’s market cap is also forcing the correlation coefficient to positive relative to the stock market.

One plausible reason could be because Bitcoin as an emerging asset class is finding more adoption. The endorsement of Bitcoin as an investable digital asset. It is an able alternative to gold operating as an internet native currency with support by the SEC could explain why. On another lens, Bitcoin is a utility serving as internet money useful in relaying value from one part to another.

At the end of the day, traders should not put in a preconceived box and assume correlations. Bitcoin and the stock market enjoy a two-way relationship. Although there might be a loose correlation, it shouldn’t be assumed for causation.

Is RMRK a Good Investment?