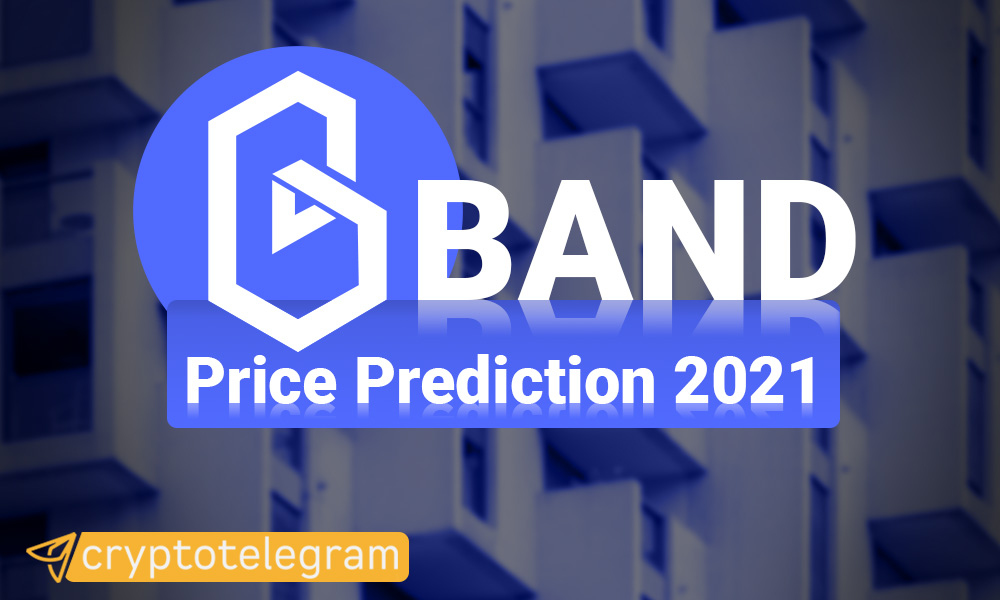 The word DeFi is not something new anymore even to those with little interest in it. DeFi has dominated the crypto market recently and it is still pretty much going strong in the market. There are several sectors of DeFi from yield farming to oracles, lending, and DEX.

The part of DeFi we are focused on is the oracles under which BAND is categorized. BAND is an Oracle protocol much in the same line as Chainlink.

So, how valuable is this token in the market? It is easier for traders to trade when they have the price projection for their tokens of interest. Therefore, getting the Band Price Prediction for 2021 could help inform their investment decision.

Most DeFi apps rely on external data and the way to avoid depending on centralized data providers is to turn to decentralized oracles like the BAND protocol. BAND protocol describes the process as connecting smart contracts with reliable off-chain data supplied by community-managed data suppliers.

In other words, BAND is a data oracle protocol that operates across chains, which accumulates and links live data and APls into smart contracts. Also, Blockchains are undeniably immense and undisputed when it comes to secured storage, deterministic, and certifiable computations.

It is virtually impossible to access data available outside the blockchain networks securely. With the decentralized Band protocol, smart contract apps like DeFi, prediction markets, and games can be built on the chain network without having to depend on the single point of failure of a centralized oracle.

What’s more astonishing is the market backing that the Band protocol has. It is strongly supported by channels of stakeholders, which also includes Sequoia Capital. The Sequoia capital is one of the top venture capital firms in the world with leading experience in the Binance cryptocurrency exchange

Before we dive into the price evaluation of the BAND Token, let us take a look at a quick review of this evolutionary token’s history. Soravis Scrinawakoon, the famous Forbes 30 under 30 entrepreneur was the first person to initiate the Band protocol.

Soravis Alma mater was Stanford, where he had his undergraduate program and master, with Boston Consulting Group on his resumé. He also initiated several businesses like energy drinks, coffee, and deep-fried Tofu chips while working for the BCG company.

What prompted Soravis into cryptocurrency in 2014 was the $100USD Bitcoin airdropped to MIT undergraduates for completing a Survey. Each of that 0.3 BTC distributed is now worth over $16,500.

With time, perseverance, and exposure, the Band protocol began to evolve with its focus on the oracle element of its purpose. Thanks to the growth of DeFi and Dapp space, it dawned on them that these technologies couldn’t perform without access to real-world data. Also, they realized that these protocols would be limited in both the use-cases and user bases if they were secluded from real-world data within their original blockchain.

With these insights, the Band protocol team began to develop a newly focused oracle protocol that would be faster, cheaper, and more developer-friendly, beating the other oracles on the market. This was what led to the launch of the Band protocol’s new main net in June of that year. It was developed with the Cosmos SDK and became a part of it as well.

It is also vital to know how this token works before divulging it into market price trading. The Band protocol built on the Ethereum blockchain possesses multiple data-based communities, and each respective tokens were not only unique but were also supported by the BAND token. The token price fluctuations were based on demand for data within the community.

It is important to note that most secondary sources out there like articles, Twitter, and YouTube videos mainly focus on the Ethereum version of the Band protocol. Meanwhile, the newly adopted BandChain is a much simpler delegated proof of stake (DPos) mechanism for obtaining dependable data. In a simpler form, it is a network that operates with validators and delegators to ensure consistent and on-point external data.

You’ll notice that when data is requested from the Band protocol, it is essential to submit a smart contract to the BandChain with details of what data is desired and how should the data be aggregated. Such Smart Contracts are then handed over to the Validators that are randomly selected according to the weighted average of their respective stake to provide the data.

For a clearer explanation, take for instance that you’re ordering a meal at a cafeteria or an eatery. Then you submit your order, which is the smart contract in BandChain. Your specified order is Hotdog (i.e. data), with a supplement of mustard and ketchup, which is “How you desire your data to be accumulated together”.

The Chef represents the Validators, that are randomly selected judging on their availability and how best they prepare your order (Smart Contract). Then you pay for your order in “BAND Tokens” to receive your specified order (data). However, compared to real-life eateries, all these processes only take 3-6 seconds on the BandChain with a low-cost price of less than $1.

The Binance enabled Band to be launched in an “Initial Exchange Offering” form, which at that moment was only opened for selected users in order to partake in the sale. Binance presented the BAND token with a price value of $0.47. They recorded a sale value of about 27,370,000 Bands, which was approximately 27.37% of the total Bands in circulation. Their gain was around $10.85 million.

This was known to be one of the few projects that prompted the featured project into a sole & secured decentralized oracle niche.

In the Band protocol blockchain, there are mainly two kinds of tokens. They are the BAND Tokens and Record tokens.

The BAND token is the native token of the protocol and it contains all data sets’ joint value in the same protocol. The BAND token use-cases can be categorized into three; which are the collateral for issuing record tokens, management, and participation in the BandChain consensus algorithm.

Unlike the BAND token, the record token symbolizes the ownership interest in a certain set of data within the Band protocol. The BAND token also makes use of three use-cases such as the participation to obtain data provider slots, use for data provider management, and voting.

Currently, the price trend of Band is looking quite promising at around $17.6 as of February 21, 2021. Even though it’s moving at a slow pace, It has a promising future. Hopefully, there shouldn’t be any price devaluation as long as the team continues to work and upgrade its protocols, products, and partnerships.

Most importantly, the price history of the BAND token presents formidable horizontal support and resistance levels, and if you’re wondering if this token is worth your investment. Worry no more, its development might not be as bullish as BNB but it is certainly progressing with an upward trend.

It is more than likely for the token to boost past the predicted mark of $20 this year according to the predictions of some reliable secondary sites.

Fxstreet predicts a fall in the price of BAND tokens in the short to medium term. According to their website, the band token recently broke down from an ascending parallel channel. This places the next resistance target for the BAND token at $ 8.35.

Of course, these forecasts are specific to Band and do not take into account general market conditions. Therefore, if we include the fact that we are in a massive bull market, I think Band token will obviously be aiming for much higher prices. If the bull market continues until the end of 2021, Band is likely to hit a new all-time high ranging between $ 140 and $ 280.

BAND price prediction for 2021 by DigitalCoinPrice

The prediction by digitalcoinprice for 2021 suggests that BAND will keep going up reaching up to $29 in a year’s time. It is not expected to go down based on their estimation making it a token worthy of your portfolio.

Analyst at walletinvestor has an almost similar prediction. They predict that the price of the BAND token will reach $23 in 2021 with the long-term earning potential at +35.46. They are also predicting that the price is unlikely to come down in the nearest future instead it will maintain positive growth.

Using a deep learning algorithm, the prediction by Gov.Captial positions BAND price to reach $50 in 2021. This is the highest prediction for the year we have in the list of predictions by crypto website price analysts.

YouTubers have also been contributing their own prediction too and we take a look at some of the exciting ones.

YouTuber Topcoin predicts the BAND token to keep gaining and growing in the market with a target price of $150. You can watch his full analysis here:

Another YouTuber CryptoMindset also expects the Band token to go way high to reach 50 times the current market cap. Here is a link to the full briefings.

Words From Crypto Twitter on BAND Price Prediction for 2021

Going by Mirashi’s prediction, she is projecting the BAND token to hit $150 in 2021. This is quite a hopeful prediction, which we will place as a very optimistic one. However, in the world of crypto, you just can’t write everything off.

In this Twitter post, it is projected the BAND token to reach a higher high than the all-time high it achieved on February 13. It should gain as much as 40% going by this prediction.

Going by various predictions that we have, it is highly unlikely to see BAND reach $100 in the near future. However, in the crypto market, you never say never. According to Digitalcoin, BAND is projected to reach $29.42 by 2028 and that is not even halfway to $100.

Will BAND Crash in the Future?

According to the Walletinvestor that is also unlikely to happen, the protocol has a lot of potentials and offers value. That means it is most likely to continue attracting users and investors, thereby, putting the idea of it crashing to bed.

Is BAND a Scam to Be Wary Of?

Nothing suggests that BAND is a scam token. Just as we said earlier, it provides value and it also has solid roots. Therefore, BAND looks very legit as a project.

Is the Band Protocol (BAND) Dead?

Undoubtedly, the Band Protocol is not dead—and neither is it in the crypto/DeFi ICU.

There are several reasons why the Oracle service provider is reliable, powering DeFi.

The most outstanding feature is the number of partners Band Protocol has joined hands with. In the power of numbers, so is the project buttressed, finding superb traction, explaining its exploding mega valuation over the years.

By the end of July 2021, BAND had a market cap of $200 million and is the second most adopted Oracle in DeFi and across crypto finance, only trailing Chainlink.

As such, investors can bank on this depth of liquidity, valuation, and partnership to authoritatively say BAND is not going underwater anytime soon.

In this article, we provided some BAND token price predictions for the end of 2021 by taking into account the fundamentals of the project, the overall market conditions, and Band token technical analysis.

The BAND price forecasts gathered so far show a positive trajectory for the BAND token price. We expect it to maintain that positive outlook for 2021 as several sources point in that direction. It is a token worthy of your portfolio going by what has been discussed so far in terms of price prediction.

It is clear that the price will highly depend on the duration of the current bull market, and also the demand for Band to be used in DeFi products and applications.

By combining all these aspects, it is fair to say that a “10x to 20x” from the current price (140$ to 280$) would be a fairly reasonable target for the BAND token. However, do keep in mind that the cryptocurrency market involves high risks, you have to do your own due diligence, and never invest more than you can afford to lose.

Bitcoin Price Bottoms up from $43k, BTC/USD to Overcome $50k?