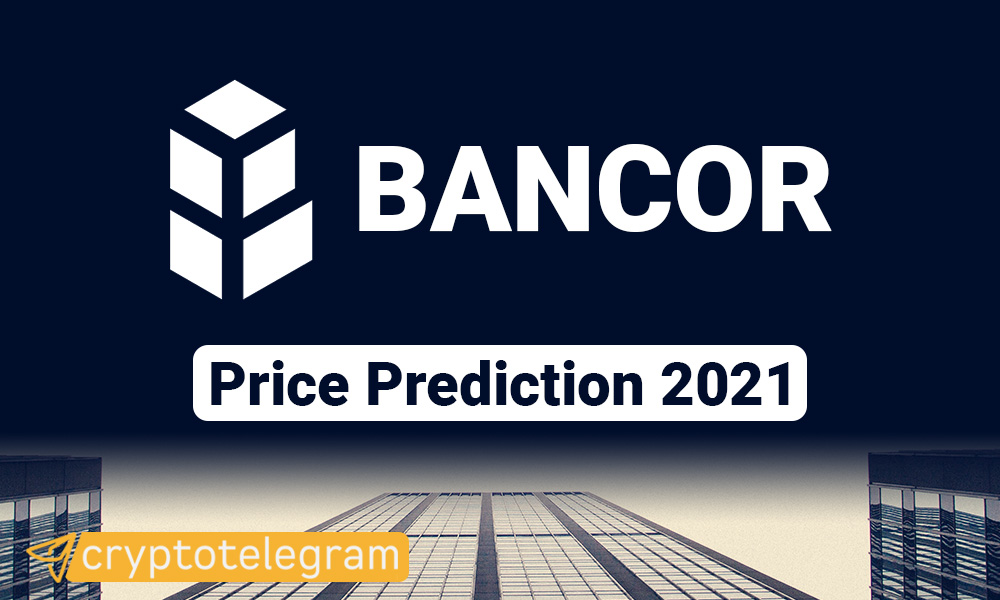 There are plenty of blockchain projects that are focused on dApps and the conversion of tokens. But one of them that stands out is the Bancor Network and its BNT token.

In terms of popularity, this project is well known in the cryptocurrency space. However, it has had its fair share of ups and downs such as from being a blockbuster ICO to legal challenges.

However, since the launch of the ICO, the Bancor Network has seen over $1.5 billion in token conversions take place on its platform, all made possible by the BNT token.

In this Bancor price prediction 2021, we are going to check the price projections from different platforms and individuals.

What is Bancor (BNT)

Bancor Network is a decentralized exchange that allows users to convert any token in their possession to any other token in the network.

This action is done with no counterparty but at an automatically calculated price. Based on the information on its website “Bancor’s decentralized liquidity network redesigns the way people create and share value by ensuring continuous on-chain liquidity between blockchain-based assets”.

Bancor has made the user experience of exchanging tokens quite easy. Their unique wallet app is slick and allows for the quick and easy conversion of tokens similar to what users get when using Coinbase Pro or other custodial wallets.

Bancor was founded in 2016 by, Yudi Levi, Guy Benartzi, Galia, and Eyal Hertzog. The project was named “Bancor” in honor of John Maynard Keynes who came up with the word 76 years ago to explain a supernational currency.

The recovery was attributed to the news of the release of Bancor V2 in July 2020. So far, the coin started the year on a good note courtesy of the BTC bullish run which was believed as the cause of the rise of many altcoins.

Many people are looking to invest in digital assets (including Bancor Network Token) due to the huge return which they provide.

Even institutional investors are trying to invest in assets with long-term profit. With the increasing awareness of the digitalization of assets and the awareness of cryptocurrency on the rise, altcoins like BNT have a lot of potentials ahead.

With the coin’s ongoing popularity, different platforms and individuals have made their yearly predictions on the coin. Let’s look at some of them.

The platform analyzed the price of Bancor and made their future projection for the coin. Their forecast was represented graphically in a way that it would be easily understandable to both traders and investors.

According to the experts in Digitalcoinprice, Bancor’s price is capable of reaching $5.54 by the end of the year. The website used its algorithm to forecast the price of the digital coin for the year.

Their price prediction chart shows a bullish run for the coin in the year.

Crypto-rating provides a comprehensive Bancor price prediction that gives a better insight into the future expectations concerning the price actions and market capitalization of the coin.

With future projections, you can adjust your trading strategy and make calculated investment and trading decisions in the future.

According to the platform experts, the coin will exceed $4 by the end of 2021. The website’s price projection algorithm takes into account not only the reading of the CVIX but also all-encompassing data of historical price behavior, and the prospects of the project’s future development.

This website’s forecast is one of the best because of their detailed analysis of the coin before forecasting.

Walletinvestor’s analysts see BNT as a bad 1-year investment but a profitable 5 years investment. Their forecast is based on the coin’s technical analysis using the historical price chart of the coin.

According to the platform, if you are searching for cryptocurrencies with good returns, BNT can be a profitable long-term investment. The platform’s future forecast is also represented in a graphical chart that shows a bullish run in the long term (but a 1-year bearish run).

They predict that the coin price will average $3.11 with a minimum price of $1.86 and a maximum price of $4.2 in the year. Given the history of the platform, we think that their future projections should be recorded.

Although the platform’s future coin projections are mostly outdated, their detailed analysis of coins makes it one of the platforms to watch out for their predictions.

The platform made their Bancor price estimation for the year by applying their in-house deep learning (neural network) algorithm to the historical data of BNT.

Using this same method, Cryptoground also predicts the price of Bancor Network Token (BNT) for various periods of the future.

With these factors, the platform thinks that the price of the cryptocurrency will be around $0.66 by the end of the year. The projection shows a 1-year bearish trend but a long-term bullish trend (like 5 years investment).

When we review its price prediction curve for the cryptocurrency, it shows an uptrend, which means that the coin has the ability to become a profitable investment in the long term, exceeding $ 16 in 5 years.

Looking at the bull run of the crypto ecosystem in early 2021, it seems this year’s prediction has fallen a bit short. 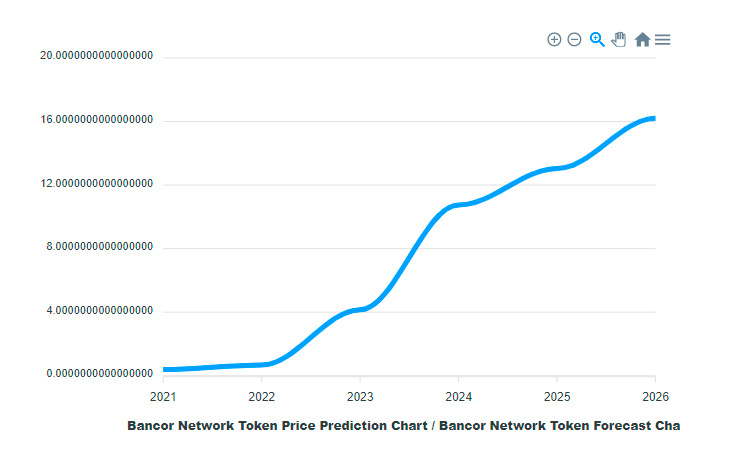 In the case of Bancor, they followed their normal steps in estimating the long-term price of the coin.  Based on the Bancor network token’s historical price data, they think that the BNT will trade at $2.99 at the end of the year.

However, they gave more insights about the coin’s future in their platform such as; price analysis of the coin, etc.

Many of these predictions were made before the bull run at the beginning of the year, so it looks like BNT may go much further this year than some media predicted.

Several Twitter users have made their Bancor (BNT) predictions for the year, but we will pick the interesting ones.

The Twitter user is widely known for projecting the future price of cryptocurrencies. In a tweet in December last year, he forecasted some coins’ future prices, including BNT.

These are the back bone of defi, and will see phenomenal gains compared to all other coins.

Checking through the BNT price at the beginning of the year shows that his bullish prediction is on course.

This tweet caught our eyes even though it was made two years. The user estimated the price of 6 cryptocurrencies which BNT is among.

He projected a bullish run for Bancor and thinks that the coin will reach $25 in the next 5 years.

When you look at the cryptocurrency market trends, you will notice that this forecast might materialize within the 5 years intervals. “Long-term (+5 years) price prediction of my biggest investments: $OST 3.5 usd $WAVES 150 usd $NEU 10 usd $BNT 25 usd…”

This prediction requires users to vote for the future price of the coin. The user dropped four price variants namely: $2.5, $1.80, $2.80 and $3+. The voting can be followed here

Among the 71 people who voted, 36.6% agreed that the coin’s price would reach $3+ in the future, while 32.4% thinks it can hit $2.5 in the future. One thing that is clear in the voting is that majority believes that the coin will have a bullish run this year.

Crypto_Troll prediction was made two years ago, but it is still fluid considering the current happenings in the crypto space such as the surging Defi popularity.

any other coins I should look at? pic.twitter.com/Vuhj6hYtys

We think that this prediction was made based on the bullish crypto run that started earlier this year. The crypto investor thinks that the coin can reach $42.50 – $47.50 in the future. Some users were curious about when such would happen. You can follow the responses here.

Having brought the Twitter predictions, let’s look at YouTube for what some users have to say concerning the coin this year.

This YouTube channel predicts a bullish run for the coin this year. From his estimation using the coin’s historical price, he thinks that the coin’s price is capable of reaching $10 this year.

After analyzing the coin’s historical price behavior starting from the release date, the market cap, the all-time high, and the bullish run, the YouTube user thinks that the coin is capable of rising by 5X and 6X within the year.

That is more than $7 in the year. However, a user who commented below the video thinks that the coin is capable of breaking the $20 prediction in the year.

Token Metrics is a YouTuber who thinks that if Bancor continues to hold the dollar authority, it can reach $160 or an all-time high of $240 in the long run. The YouTuber thinks that it is not a bad idea to buy Defi-related altcoins.

That’s because if bitcoin did it and Bancor is part of the future of Defi, then it is largely going unnoticed. This means it is time to look at the smaller coins like BNT. So, the user sees it as a profitable long-term investment.

One of the major problems in the mass adoption of a cryptocurrency is the absence of liquidity and difficulty in exchanging various tokens for each other. But the Bancor protocol has solved all these problems through the automation of liquidity.

Solving this problem means drawing the attention of users to the protocol. Thus, increasing the popularity of the coin.

From the predictions so far, it is clear that the Bancor Network Token (BNT) is gaining steady popularity, leading to a bullish run on the token. Over 90% of the predictions show that the coin’s value will increase in the future (like 5 years).

Token Metrics, a popular YouTube channel is known for analyzing and predicting the future price of coins went as high as quoting the price to reach $160 in the future; that shows a high level of optimism in the coin.

Although some platforms predicted less than $1 for the year (old forecast), however, they all agreed that the coin would have an impressive bullish run in the year, What do you think? Drop your comment below.