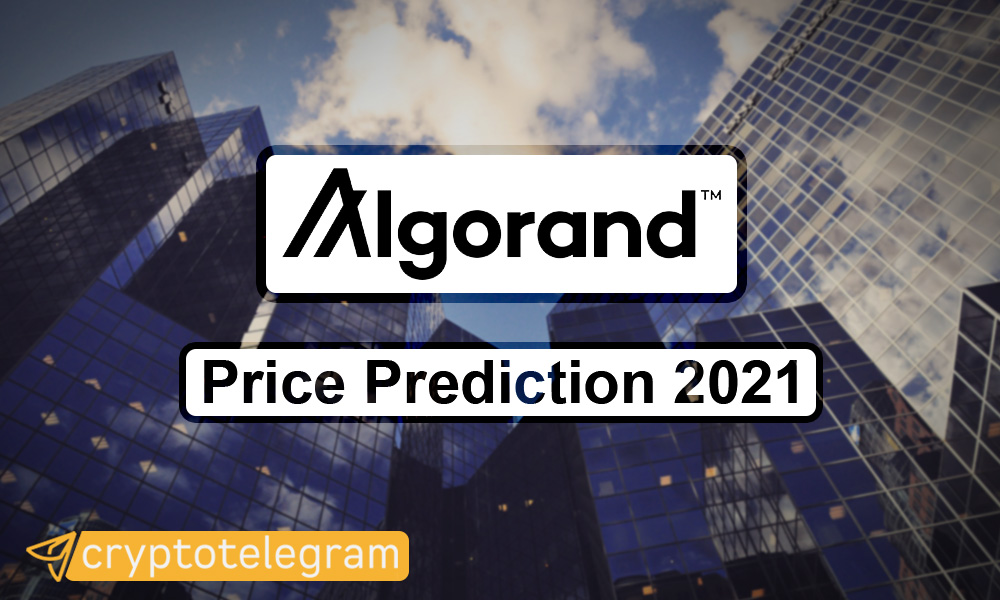 Algorand is a project that seems to have everything going for it, such as a strong team, strong tech, deep pocket, etc. It is one of the recognized public cryptocurrency blockchains and protocols that seek to deliver security and decentralization. So, we have decided to look into the Algorand (ALGO) price prediction for 2021.

The project has risen on the scene and has broken into the top 100 cryptocurrencies. It has been touted as one of the exciting projects, thus has drawn our attention. We will look into the opinion of both traders and investors in the article.

The unprecedented surge in cryptocurrency witnessed at the beginning of the year has led to various opinions regarding Algorand. For us, we believe that Algorand (ALGO) is capable of continuing the bullish run witnessed at the start of 2021.

In this article, we will be looking at the various ALGO price predictions for 2021. Our focus will be on the various cryptocurrency forecast websites and the individual predictions from YouTube and Twitter crypto influencers.

But before we look into these ALGO price forecasts, let’s grasp an overview of what Algorand cryptocurrency is all about and the team behind it.

Algorand is a scalable, secure, decentralized, permissionless public chain that aims to enable a borderless economy by creating an advanced blockchain platform.

The project seeks to provide a sustainable and boundless opportunity for all. The platform developed its own consensus mechanism called pure proof of stake (TM), which is a variant of the proof of stake.

The main advantage of this is that the Algorand technology finalizes blocks within seconds and provides instant transaction finality while preventing forks. The core reasons for developing Algorand are performance, instant verifiability, simplicity, and adoption.

What is ALGO Token?

ALGO is the native governance token of Algorand. The token’s ICO was held in June 2019 and raised over $60 million, selling 25 million tokens at $2.40 each.

Information from the team shows that the token supply would be 10 billion ALGO. So, the team plans to auction off 600 million ALGO tokens yearly until the entire 10 billion token supply has been released. The utility token can be used to order steak and earn those ecosystem rewards. It can also be used to pay for transaction fees in the network.

History of the Algorand Project

MIT professor Silvio Micali founded the Algorand cryptocurrency. He is an expert in cryptography, secure protocol and oversees all the research and security involved with Algorand.

He is also the co-founder of many protocols such as verifiable Random Functions, Probabilistic Encryption, etc. Silvio is a recipient of many awards, including the Turing Award (in 2021), for his contribution to the theory and practice of secure two-party computation, electronic cash, cryptocurrencies, and blockchain protocols.

Other notable individuals in the project include; Steve Kokinos, who serves as the CEO of Algorand, W. Sean Ford, who is the COO of the platform. These individuals have also accomplished great things independently.

Outside of the team, there is also the Algorand Foundation which is the governance and research organization that encourages participation, development, and innovation on the Algorand platform.

The team’s goal was to design a project to solve many blockchain problems, such as developing fast and scalable cryptocurrency without trading off decentralization.

Algorand (ALGO) token entered the year with a trading value of $0.37 and benefited from the bullish altcoin season. The cryptocurrency price will likely escalate in the year if it concentrates on building its platform and the software up-gradation.

However, even amid these factors, many platforms have made their Algorand (ALGO) price prediction for 2021. Most of these platforms used their in-house algorithm, which estimates the future price of a cryptocurrency. Others also considered factors like; historical data price and the opinion of others.

The essence of these forecasts is to give you a future price idea of the coin, which would help you make investment decisions regarding ALGO in the year.

The Coinarbitragebot Algorand’s price prediction for 2021 is not very optimistic. According to the popular platform, ALGO’s price could be $1.05 by the end of 2021 (the price that was far exceeded at the beginning of the year).

Going further, they think that it is capable of reaching $7 in the next 3 years. It means that the crypto analysts on the platform see the coin as a profitable long-term investment. The platform used the historical price data of the cryptocurrency for its prediction.

Also, you can check out a comprehensive Algorand technical analysis on the website. Considering the long history of predicting the future of digital coins, you should look into this forecast.

The website analyzed the cryptocurrency price from when it was launched and also considered the historical price data and the past innovations in their forecast. They also looked into other platform’s ALGO price forecasts, such as Coinarbitragebot, Digialcoinprice during their prediction.

Walletinvestor is among the websites that have made its Algorand price prediction for 2021. According to their forecast, ALGO is an outstanding long-term (1 year) investment.

The website arrived at their projection by running a technical analysis and considering the coin’s historical price chart. So, if you are contemplating investing in the token, the website sees ALGO as a profitable investment option.

They went further to predict that ALGO value will increase to $3 in the next five years. It shows that they are optimistic that the cryptocurrency will increase in value in the year. According to the website, the maximum projection of the coin for the year is $1.87, and the minimum is $1.14.

One of the unique things that differentiate this website from others is the way it explains how it arrived at its predictions. The platform studies the coin’s historical price chart and analyzes the present and past innovations before making their forecast.

According to Digitalcoinprice, the Algorand price is likely to reach $1.73 by the end of the year. They agree that ALGO is a profitable investment based on their forecast. The website also estimated the future price of the coin ( 6 years), which shows a bullish trend.

Their ALGO price prediction for 2021 is also represented graphically on the website, giving you clues about the coin’s price movement in the year.

The website presents a detailed Algorand price prediction that gives a better insight into the current ALGO market situation, future expectations concerning the price action, and Algorand market capitalization. With these, you can be able to understand the crypto market and make your investment decisions wisely.

According to the website, the ALGO cryptocurrency price will reach $2.0 before the end of 2021. They are bullish on the coins price in the year.

The website introduced the crypto volatility index (CVIX) that showcases the present price dynamics and offers some hints at future price action scenarios in their forecast.

With these, you can make a 3-, 6- or 12-month price projection of a cryptocurrency. The website thinks that the ALGO token price might reach $3 before the end of the year. They estimate a bullish run on the coin in the year.

The Gov.capital is a popular website known for predicting the future price of stocks, real estate, and cryptocurrency. In their Algorand price prediction for 2021, the crypto analysts on the website think that the Algorand price is capable of reaching $1.8 by the end of the year

This website has given its detailed ALGO price prediction for 2021 and subsequent years. However, the website always makes it known that their future cryptocurrency price projections is just a suggestion and not investment advice.

In their ALGO forecast in the year, they said that would have an average price of $1.31 by the end of the year. In their subsequent year’s price estimation (3 years +), they also forecast a bullish run. Analyzing the prediction, we believe that they are confident of the ALGO price increase in the future. They also said that the least price of the digital cryptocurrency at the end of the year would be $1.15.

Since the ICO launch in 2019, the ALGO token has witnessed up and downturn price movement. However, the altcoin season at the beginning of the year pushed it above $1 within the first few days of 2021.

The Cryptocurrencypriceprediction website considered the various developments in Algorand, which is driving the values of altcoins to an all-time high. In their prediction, they see the ALGO price reaching $3.28 by the end of 2021. The website considers the coin getting to $36 in the next 9 years.

That is, they are highly optimistic that any investment in Algorand will be a profitable long-term investment.

There are still other websites that have posted their ALGO price prediction for 2021. But at this juncture, we would like to also look into what individuals have to say from YouTube and Twitter.

YouTubers and Their Algorand Price Predictions for 2021

Like Twitter, most YouTubers have made a video review of the Algorand price prediction for 2021. Let us look at most of them.

Dustin is one of the YouTubers that are highly optimistic that Algorand price will increase in the year. The user went as far as saying that he has sold most of his crypto assets and invested them in Algorand. From the prediction, the user thinks that ALGO is capable of overtaking XRP in the future. Based on that, he sees the ALGO price reaching $8.65 in the future.

The forecast also drew lots of comments. Most of them agreed that ALGO value would increase in the future; some saw it as a sleeping giant, while some has invested in the token and waiting for the booming market.

The ALGO price prediction for 2021 from the Crypto Kingdom is bullish. According to the video, which has exceeded 5,000 views, the ALGO price is capable of reaching $5.25 in 2021.

Most of the users who commented said that the coin is their favorite, while others see ALGO as a great cryptocurrency. The user, while reviewing the ALGO cryptocurrency market, considered the historical price in his prediction.

Golddust critically analyzed the ALGO cryptocurrency before making his forecast for the year. The user looked into the coin’s market cap and the coin’s historical price data before projecting the future value.

From his estimate, the highest price projection of ALGO for the year would be $5.82, while the lowest estimation would be $3.65. The user also listed the charts of his prediction to give you a better understanding of his forecast.

On Twitter, various crypto traders and enthusiasts have posted their Algorand price prediction for 2021. However, we would be looking into the major ones.

Some of the people who responded to the tweet saw it as an excellent prediction.

The tweeter user forecasted the future price of seventeen (17) cryptocurrencies. In his ALGO price prediction for 2021, he thinks that it could reach $10 at the end of 2021.

The user also went further to say that he would be happy if the coins reach these values, and if they pass it, better!

Algorand Could be a Worthwhile Investment in 2021

Algorand got off on a great start. The team behind the token are recognized scientists who had achieved a lot independently and had great plans for the Algorand cryptocurrency. The ALGO cryptocurrency seeks to solve most of the blockchain issues, which is a great advantage for the token.

A summary of the ALGO price estimations for the year showed that over 90% of the platforms and individual’s Algorand price prediction for 2021 is bullish. Most of the users went as high as saying that it will be a profitable investment in the year and beyond.

From the predictions, the minimum forecast was from Tradingbeasts, which is $1.31, while the maximum projection came from Monty Allen, a Twitter user, which projected $10.10 for the coin in the year. What is your view on the coin? Let us know below?