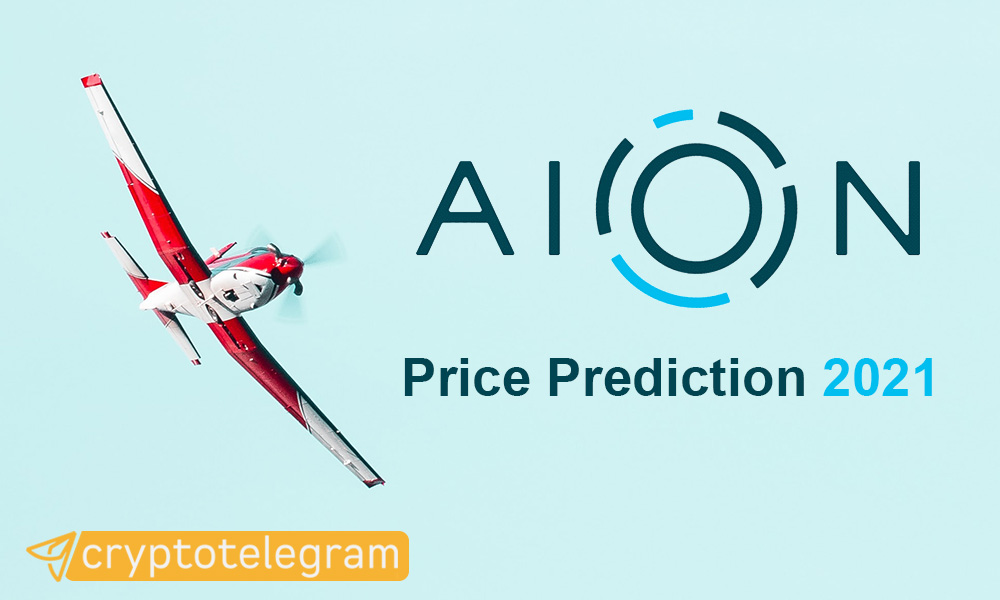 Aion is a project with many ambitious goals, and it has caught our attention today. The project wants to be a common protocol that will link a whole host of other blockchains.

In our AION price prediction for 2021 article, we cover the various cryptocurrency price prediction website’s opinions, the individual opinions from Twitter and YouTube. These websites and users considered several factors in their forecast.

The goal of the project is to make Blockchain technology accessible for everyone and enhance its integration. The Aion network’s aim is transparency. The key feature is solving the issues of security, privacy, and scalability.

The network allows private entities to:

The vision of the network is to create something similar to the internet but for blockchains.

AION is the native governance token of Aion. The token is designed to enable developers and buyers to transfer from one Blockchain to another easily. Also, the AION token allows for the execution of data transfers and smart contracts on Blockchain such as NEO and Ethereum. The goal of the token is to allow users to access all the functionalities of the network.

Aion is a community-based project developed by a world-class team and supported by top strategic partners and consultants. The network CEO is Mathew Spoke with Kaseem Frank as the COO. Mathew is also the founder of the Blockchain technology coalition in Canada, while Chan has several degrees from Business management from various universities such as the University of Toronto.

The ICO of the network was launched in October 2017 and ended in November 2017. It raised over $20 million in seed capital.

The founders and other team members received around 40% while 51.5% was directed towards token release schedule contracts, which the public will access with time. The remaining 8.55% was shared among private investors who were interested in the token. The AION token was first listed in crypto exchanges in October 2019 with 1 AION equals to $0.60.

The issue of lack of interoperability between blockchains is still one of the major issues blocking technology from being fully integrated into the mainstream of the financial world.

Aion seeks to develop a platform to address the issue and replace the current ways that banks are running global finance. The aims of the project are what is leading to various speculations regarding the coin in the year.

So, these predictions are just a mere suggestion and not investment advice. What the platforms do is use their algorithms to estimate the future price of a cryptocurrency.
Let us look at the AION price prediction for 2021 from various platforms.

Tradingbeasts has unveiled its Aion Price prediction for 2021. The website predicts that Aion could have an average price of $0.19 by the end of 2021. Also, they project the minimum price for the year as $0.16 and the maximum price at $0.24.

The website did not go ahead to say whether they are bullish or bearish for the Aion in the year. Instead, they said that its estimations are only a suggestion and not investment advice.

But when we studied the Tradingbeasts’ forecast and compare it with the previous price of the Aion, we believe that they see the price of AION stabilizing in the year.

Tradingbeasts also posted their monthly predictions, which might be helpful to you, especially if you are thinking about short-term investment in this cryptocurrency.

This websites’ Aion prediction for the year is slightly bearish. According to the analyst at Walletinvestor, AION is going to be a bad 1-year investment. Walletinvestor projects the price to decline to $0.10 by the end of 2021. The website also went further to say that its maximum price in the year will be $1.9.

When we compare this forecast with the average price of AION in the first 3 months of the year, we believe that this estimation sees the token as a bad short-term investment but likely a profitable long-term investment.

The experts at Digitalcoinprice have made its Aion price prediction for 2021. They used their in-house algorithm to forecast that Aion’s price will be $0.24 by the end of 2021.

Considering the price of the cryptocurrency in the past few months, we think this forecast is best suited for a short-term investment. Also, the Digitalcoinprices’ long-term prediction looks bullish too. From their prediction, they see the coin reaching $0.7 in 6 years.

In Digitalcoinprice’s investment advice, they see AION as a profitable investment based on their estimations. This is one of the few websites used by YouTubers in their cryptocurrency price projections, which means that it should be taken seriously.

Crypto-rating is another popular website that has made its Aion price prediction for 2021. The website presents a comprehensive Aion price forecast that gives a clear insight into the current AION market situation, future expectations concerning the price action, and the coins market capitalization.

With this, you can get a clear understanding of the crypto market, adjust your trading strategy and make your investment decision. According to them, Aion might become a potential short-term profitable investment. The system predicts that Aion will stay around $0.27 at the end of 2021. This prediction shows that AION’s price might stabilize in the year.

Crypto Rating introduced the Crypto Volatility Index (CVIX) that shows the present price dynamics and offers some hints at future price action scenarios in their forecast.

Coinarbitragebot AION price prediction for 2021 is bullish. According to the website, Aion is going to be a profitable short- and long-term investment. Their projects the Aion to reach $1.42 before the end of the year. Also, in three years, the AION price could reach $10.21.

The website did not give any investment suggestions regarding the coin like they do with most cryptocurrencies. However, their projection shows that they are highly optimistic that any long-term investment could turn out to be a profitable investment.

This website’s prediction shows a bearish trend in 2021 but a profitable long-term investment. Cryptoground believes that Aion’s price will crash to $0.12 by the end of the year.

They went further to forecast that Aion could reach $7 in the next 5 years. The Aion price at the beginning of the year rose above the $0.1 threshold. It means that a prediction of $0.12 will likely be a bearish trend in the year.

Today, we looked into this popular blog Aion price prediction for 2021. While going through the analysis on this blog, we stumbled on their forecast. The website sees the Aion price remaining between $0.1 and $0.2 in the year.

They see the coin rising to $1 by 2025. Although the prediction was made last year, it is also worthy of looking into. The website analyzed the coin before dropping their future price estimation.

We will be stopping here for now. There are still other websites that have made their AION price prediction for the year, which you can check. For this article, we concentrated on popular platforms with a history of cryptocurrency forecast.

The summary of the Crypto Geek’s predictions is that the Aion price will stabilize in the year. The majority sees it trading between $0.1 and $0.2. Although, the majority of the platforms did not give any investment suggestions on the coin, the body language of these forecasts shows that AION is a bad 1-year investment but might likely increase in value in the future ( making it a probable long-term profitable investment). Let us also look into the individual’s opinions from YouTube and Twitter.

Youtubers and Their Aion Price Predictions for 2021

Like Twitter, YouTubers have made their Aion price forecast for the year. But our main focus will be on the important one.

The Wolf of Trading

This is one of the YouTubers who believes that Aion has a brighter future. The user thinks that Aion’s price might reach $0.8 in the year. The user-based his prediction on the historical price data of the token.

In the video that has exceeded 3000 views, the user also did a technical analysis before dropping his future forecast. Most of the users who commented on the video said that they have purchased the coin and waiting for a bull run.

Various Twitter users have made their Aion price prediction for the year. We will be focusing on the recent one.

The Twitter user made his predictions for the next altcoin season. The forecast, which was made in late November last year, drew some user’s attention.

Aion Could Be a Worthwhile Investment in 2021

The increasing popularity of cryptocurrency has been occurring at a breakneck pace, but one of the key things is a better way of creating interoperability between blockchains. Aion thinks that it has a solution to that and wants to make cross-blockchain transactions and communications a reality.

Is Aion a worthy investment? From the Aion price prediction for 2021 that we saw above, it might be a great long-term investment.

However, don’t expect to play short because the future projections don’t see the coin growing fast in the near future (1 year). However, in few years to come, those investments might become profitable. In the Aion price estimations for the year, the minimum forecast came from Cryptoground, which estimates $0.12 in the year, while the maximum forecast came from Coinarbitragebot, which estimates the Aion price to reach $1.42 in 2021.

All the estimations agreed that the AION price would stabilize in the future. What is your AION price prediction for 2021? Drop your comment below.