The crypto mood is ecstatic, and so are Cardano traders.

At the time of writing, Cardano prices were relatively stable on the last day of trading, adding single digits week-to-date.

Even so, ADA is still perched at fifth, effectively making the project one of the most valuable in the space.

The question in everybody’s mind is whether Cardano, in the weeks ahead, can shake off bears and gallop higher in a buy trend continuation pattern.

Understandably, a big part of this has to do with the project’s development and smart contracting activation.

This will be massive for Cardano, effectively putting it at par with others like Ethereum.

Progress towards that end is smooth and ADA holders, as expected, are confident.

However, the pace of the uptrend also has to do with how well candlesticks are arranged.

As of writing, ADA/USDT prices are flat-lining and surprisingly pinned below July 2021 lows of $1.5. 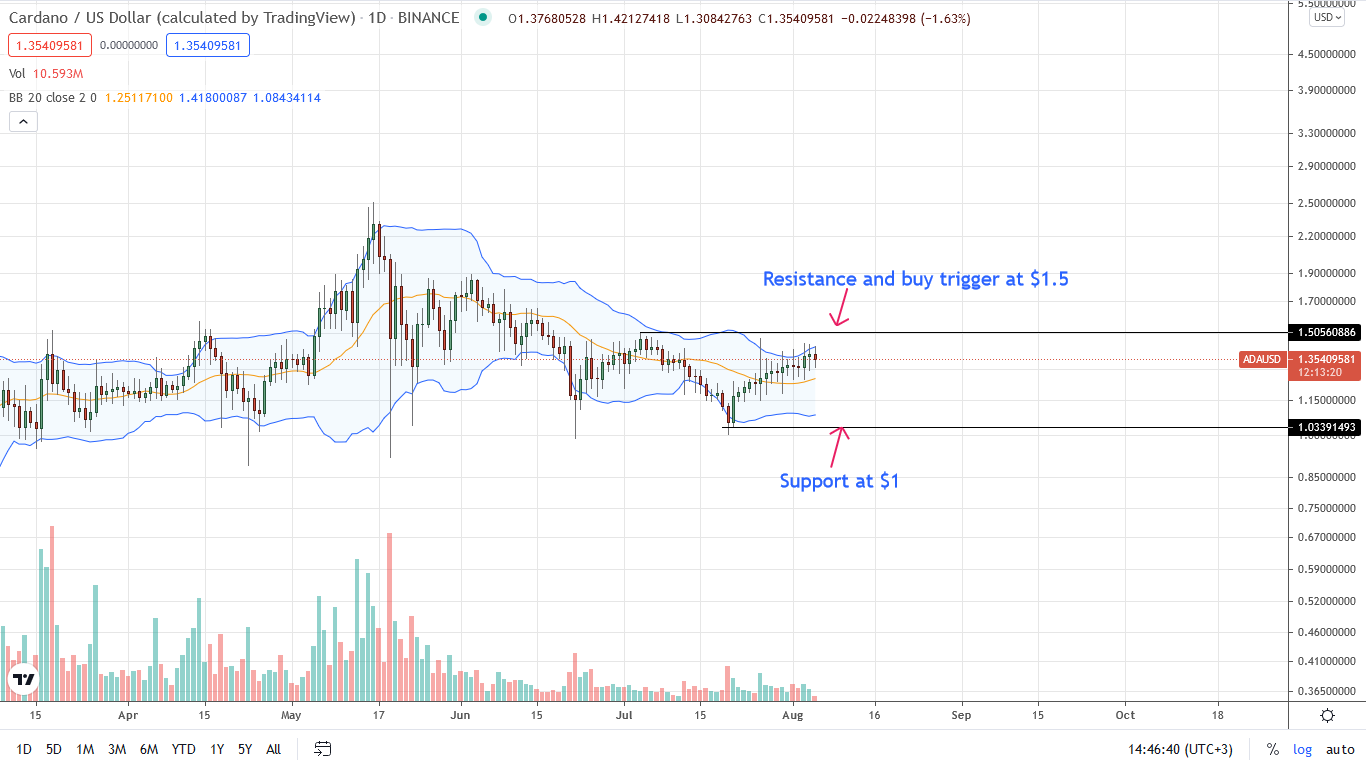 From the daily chart, the liquidation line of $1.5 marks a critical level—and ought to be broken if buyers are to come on top in subsequent months.

Already, there are subtle hints of strength.

For example, the green bars of the past ten days were a follow-through of the double bar bullish reversal pattern of July 20 and 21.

And the sentiment around ADA reaching this level is high.

Charles Hoskinson, the technical lead of IOHK, recently dismissed Peter Brandt’s technical analysis, which suggested that ADA was on the brink of a collapse.

He drew parallels between ADA/USDT and LTC/USD of mid-2018 when Litecoin peaked before sinking to as low as $20.

Charles had no kind words for technical analysis, terming it as obsolete in the age of computers.

In his view, this trading method is useless and ineffective in the age of AI and big-data-powered black-box models.

Fundamentally, Charles explains, ADA is strong and the future bright. Cardano is the most active in developer activity.

#Cardano number one every time what a team building #Cardano proud to be apart of it since the start the journey so far has be unbelievable now onto smart contracts to show the world what #Cardano has to offer 😎💥💥💥 pic.twitter.com/GvWNOx3lPG

The activation of smart contracting will give Cardano another boost:

$ADA is going to do well in the coming weeks.

Smart contracts would give Cardano a super boost.

Waiting for the next leg up on break of this ascending triangle. pic.twitter.com/rk095pX5pp

As one technical trader notes on Twitter, the ADA price is moving inside an ascending triangle in the 4HR chart.

As such, the odds of prices breaking above the main resistance trend line is high, a net positive for bulls—and an opportunity for ADA bulls to accumulate at spot rates.

Cardano Ready for a 5-Wave Impulse Run to $7

On Trading View, another trader thinks this is the best time to fill the ADA bag.

From the candlestick arrangement in the daily chart, ADA prices are retracing, correcting after peaking in Wave 3.

Since the correction is now complete, ADA/USDT will likely explode to $7.

Uniswap Is a Unicorn but Will UNI/USDT “Top Out” At $100 This Year?

Polkadot Is A “Strong Project,” DOT/USDT Can Easily Do a 5X