Are Cardano traders putting on their spacesuits?

The rally is over and gains of the last nine months over?

Is the mega event on September 12 priced in for ADA bulls?

These are the hard questions Cardano bulls and ADA traders have to ask themselves. It has been a smooth three quarters and more where ADA has more than 10X, rising from the ashes of less than $0.05 to peak at over $3.3.

At the time of writing, ADA is third place in the market cap ranking–flipping BNB. This is a remarkable feat, a reason why Cardano dominates discourse and is closely watched by traders across the board. This, if anything, is an incredible feat that’s worth attention. Even so, it should be noted that Cardano is still a work in progress.

The project has launched staking—and is one of the most decentralized Proof-of-Stake blockchains, and smart contracting is the next feature. It is highly anticipated and set for launch on September 12. Before then, ADA traders have been scooping on dips, explaining the near perpendicular gains of the past few months. 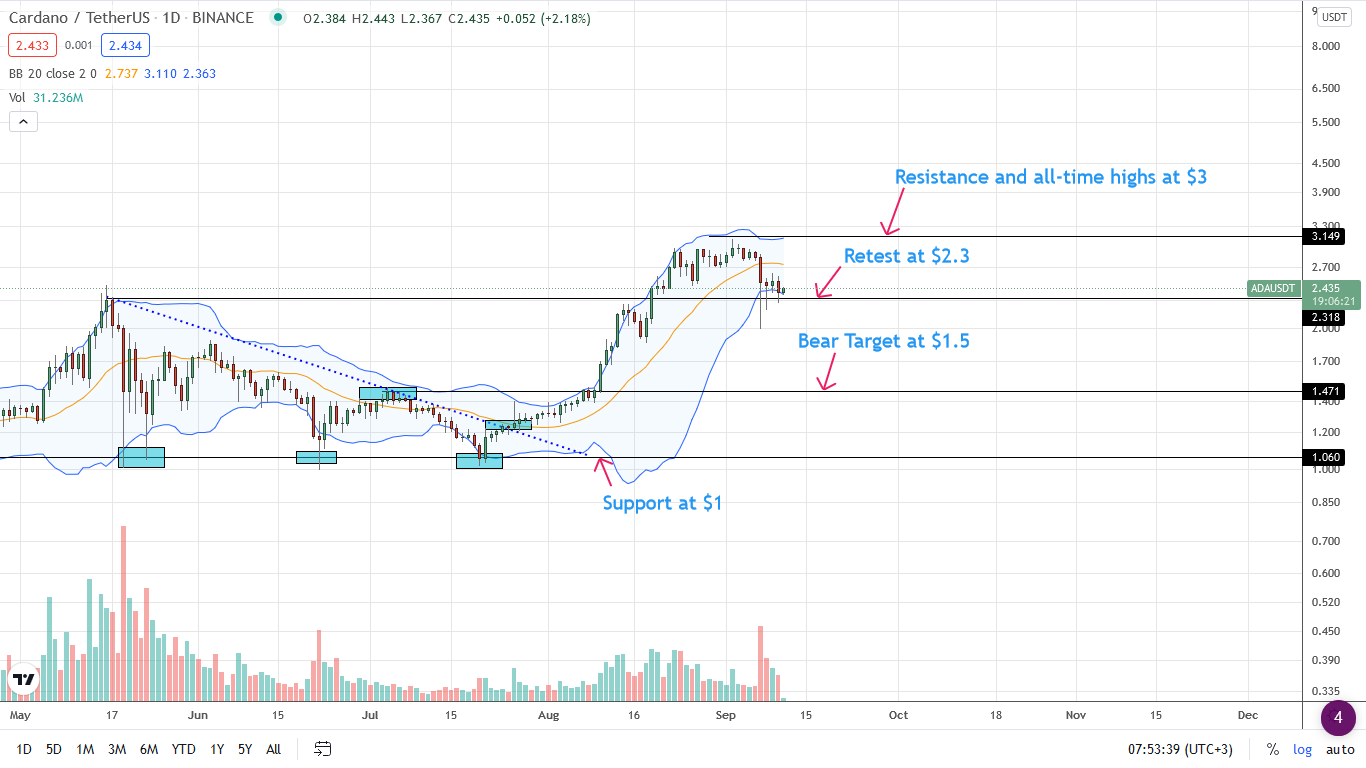 However, the spoiler of September 7 seemed to have broken sellers. From the daily chart, ADA is in red, inside the high volume bear bar. Technically, this is bearish from an Effort-versus-Results perspective.

Begging the tricky question: Will ADA reverse losses and print a new all-time high above $3?

It is the view of a trader on Twitter.

While the analyst acknowledges this week’s selling pressure, he remains confident of more up-thrust in the next few days.

The race to $3 and a new all-time high of $5, in his view, depends on how well ADA bulls reject lower lows.

As such, once there is close above the last ten days highs—at $3, the resulting Phase E accumulation based on Wyckoff principle would be the fuel jet for $5, a near 2X surge from September 2021 highs.

Cardano to More than Triple to $10

A trader on Trading View, however, is more optimistic.

Per the analyst’s technical analysis, ADA/USDT prices are trending inside a rising channel—visible in higher trading time frames—and are open for at least $10.

After posting tremendous gains through August, the cool-off was inevitable. It has happened with the September 7 losses. The pullback, in his view, presented an opportunity for aggressive Cardano traders to double down in lower time frames, loading the dips.

Even so, as mentioned earlier, ADA must reject selling pressure, and prices trend above $2.3—Hi 2021 highs, for the upswing to be valid and more potent.

According to the trader, a strong rebound from spot levels would see ADA quickly blast past $3 to more than triple, registering at least $10 by the end of the year.

Nonetheless, some traders are urging caution.

Goguen could be an excellent trigger for buyers, but ADA/USDT charts are “looking bad,” according to the trader.

Short-term traders might wait until there is a proper trend definition amid overzealous Cardano bulls. On the reverse side, long-term HODLers could find entries at every pullback.

Kusama Parachains, a Cause For KSM to 2X Towards $900?